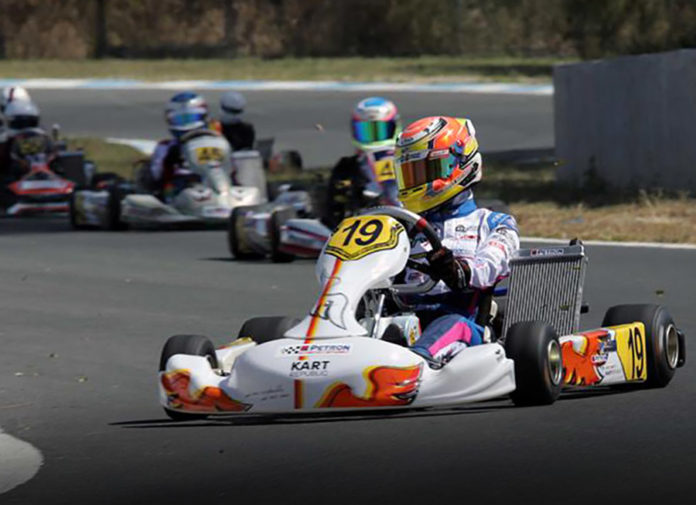 With the Carmona Race Track closed for renovation, the Petron Blaze 100 X30 Challenge Philippines has found a new home at the newly-built Clark International Speedway Kart Track for 2019. 2 events have been completed so far with the usual names of Bustamante, Suba, David, and Drueco dominating the top spots of the podium. But raw talent can also be found throughout the X30 grid with each category producing its own set of winners.

Here’s a rundown how the season is shaping up before the season finale in August.

X30 Junior Restricted
Miguel Angeles enjoyed a strong start to his 2019 campaign with a near-perfect weekend during the season opener last February 9/10. He maintained this form into the following leg and with consistent podiums now leads the X30 Junior Restricted category ahead of Jolo Suba.

Meanwhile, Zach David accumulated a string of podium finishes on his only appearance this year. But this still leaves him with a 60 point deficit to Angeles in the championship race.

X30 Junior
It’s now a 2-horse-race in X30 Junior between Miguel Quinones and Neil Jigi Tupas. Both karters showed big improvements this year allowing them to split wins during the previous event. Quinones, however, holds a slim 20 point advantage with his performance in February.

X30 Senior
Reigning Junior Karter of the Year Bianca Bustamante is untouchable in the X30 Senior category. The lady karter finished 1st overall in all races she has started ahead of everyone in a combined Junior Restricted, Junior, Senior, Master, and Veteran grid. Of all the entries in their class, only Arvin Drueco who could put up a fight against Bustamante who currently sits 2nd in the standings.

X30 Master
The X30 Master Class is still a toss up between Arvin Drueco, Rommel Herce, and Danilo Miranda. Drueco took control of the season opener and collected full points with his wins. However, his absence in the category last March 2/3 paved the way for Herce and Miranda to catch up with all 3 drivers now separated by only 10 points.

X30 Veteran
While keeping up with the youngsters, the gentleman karters also had their own battle in the X30 Veteran Class. A series of wins and podiums places Rommel Herce 45 points clear of Ephraim Mandal in 2nd with Oro Ricardo Quinones a further 10 points behind in 3rd.