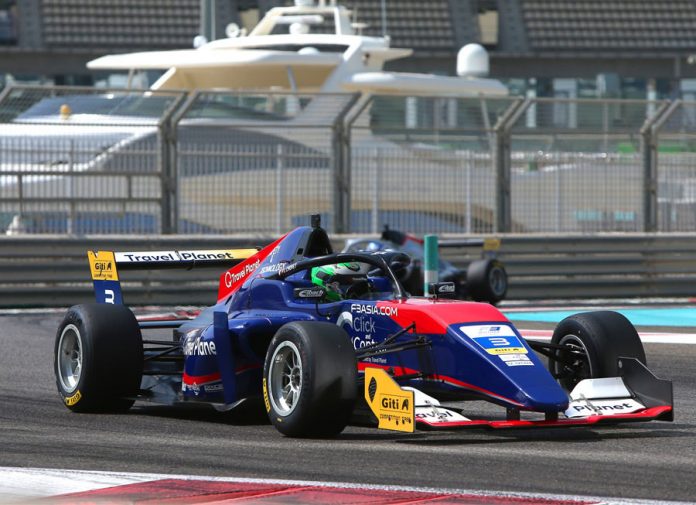 It was a déjà vu moment for Pinnacle Motorsport leading up to the season finale of this year’s F3 Asian Championship by FIA. Because less than 12 months ago, they too were fighting for the title only for it to slip away on the penultimate race of the season. But instead of a tire puncture, this time it was a contact that ended their hopes with a DNF.

Pierre-Louis Chovet had a 32 point lead in the standings leading up to the weekend at the Yas Marina Circuit. There was still a lot of work to be done, however, after he could only muster P6 in both Qualifying sessions. The Frenchman was caught in a scuffle in the opening laps of Race 13 and lost several places in the process. He managed to fight his way back up to 5th place by the time the chequered flag dropped, thus keeping his title hopes alive.

His teammate Alessio Deledda, on the other hand, did a stellar job racing under the lights in Abu Dhabi. Coming from P18 on the grid, he muscled his way through the field to secure a hard-earned 13th place at the finish. Meanwhile, Alexandre Bardinon had a disappointing start to the weekend and failed to finish after a first lap contact with another car.

But all of Chovet’s hard work, including his six race victories this season, came undone in Race 14. He made contact with an opponent’s car that ended his race wiping out his championship lead. This meant that Deledda was the highest-placed entry for Pinnacle Motorsport. It was a repeat performance from the Italian who stormed from P17 to another 13th place. Bardinon again was a non-finisher with a last lap contact yet was classified in 17th.

His earlier DNF placed Chovet a single point behind closest-rival Guanyu Zhou leading in to the final race of the season. This meant not only did he have to catch Zhou, but also find a way past. Sadly, his charge could only get him up to 5th with Zhou taking the race win and the championship. Deledda’s race was cut short when he collided with another car, ending his strong run during the season ender. Bardinon had another misfortune that left him out of the classification after a collision.

Despite missing out on the title, the Pinnacle Motorsport is still pleased to conclude the 2021 F3 Asian Championship Certified by FIA as vice-champion with Pierre-Louis Chovet.

John O’Hara, Team Director: “It was a great way to return to racing after the long break. We were in the title fight from the season-opener until the very end. Although we narrowly missed out on the championship with Pierre-Louis, we’re satisfied we pushed ourselves to the limit every weekend. Thank you also to Alessio, Alexandre, Matthias, and every team member for making the 2021 season memorable for Pinnacle Motorsport.”