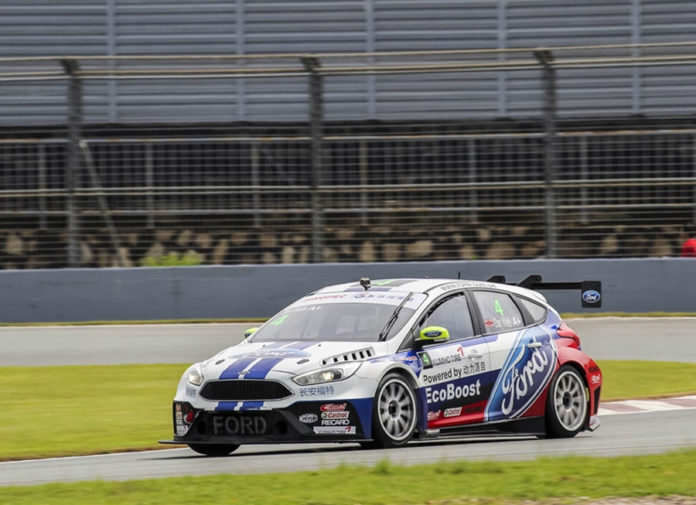 Driving for the Changan Ford Racing Team, Dan Wells made an impressive comeback from what looked like a disastrous weekend at Round 2 of the China Touring Car Championship (CTCC).

The Britton’s Super Production 2.0T Ford Focus suffered technical problems in qualifying. This put him on the very last spot of the 4.3 km Zhuhai International Circuit’s grid, wiping out all his chances at a podium finish… or so we thought. But his team worked tirelessly overnight to get his No. 4 machine back up to speed.

With mixed conditions for Race 1, Wells and his engineer Andrew Winsall opted for slick tires while half of the field ran on wets. He made a fantastic starts to jump from P16 to P7 on the very first lap and stormed through the field. Wells was in P2 when the chequered flag dropped after 8 laps, becoming the first foreign driver to step on the CTCC podium.

Race 2 was run with a reversed grid for the top 8 finishers, putting him in P7. The condition was sunny and dry when the lights went out and Wells made another stunning getaway. He overtook 6 cars in only 2 corners to lead the race, pulling a big gap in front and setting the fastest lap of the race. But a sudden downpour saw him and several other drivers fly off the circuit which prompted the race to be red flagged.

Unfortunately, the official results placed Wells in a lowly P11 instead of what should have been a race victory.

Dan Wells: “This weekend has been challenging, both personally and for the team. To suffer the problems we did in qualifying was tough, but the Changan Ford team did an amazing job to fix the problem and I was looking forward to some great fun overtaking to make it to the front. To go from 16th to 2nd in just 4 racing laps was fantastic, but I am most happy about my second race.”

How many Mustangs did Ford Philippines sell in 2017?