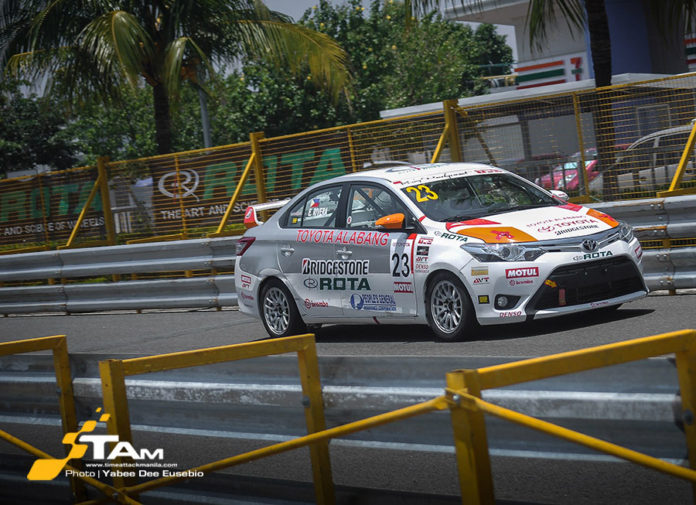 If there’s one thing we’ve learned about street circuits, is that it’s always going to be a wild one. This was exactly the case during the 3rd round of the 2015 Vios Cup, where a record-high of 48 drivers squished their way around the Manila Bay Circuit last September 5/6.

The 1.6 km race track featured five 90-degree turns, a handful of short straights, and several chicanes to slow the drivers down. Although the non-permanent circuit didn’t seem much of a challenge during practice, it was a different story come race day. 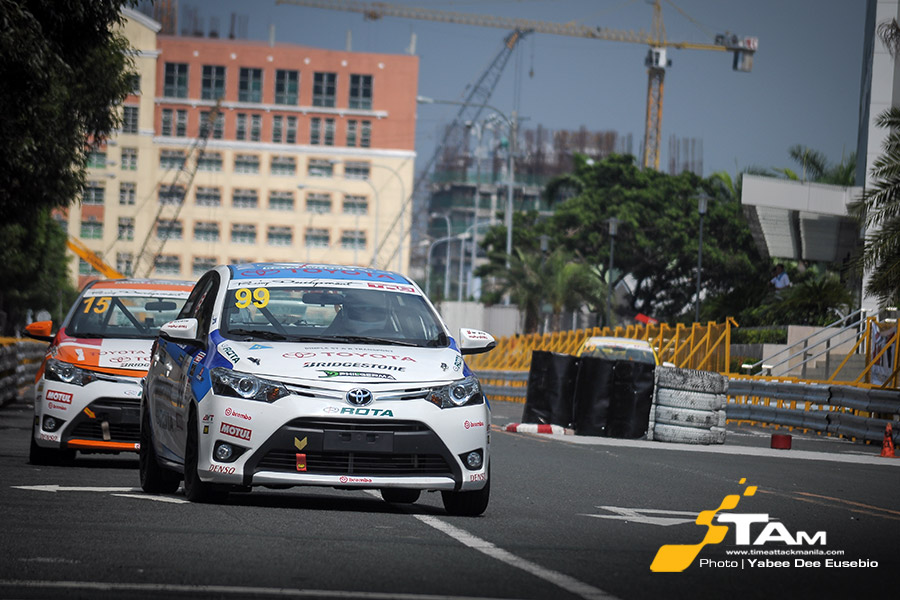 Sporting Class
Only the top 21 racers made it in the Sporting Class and got first crack of the new street circuit. The morning’s 14-lap race saw the group funnel their way into the first chicane which resulted in a massive traffic jam and car parts flying everywhere. But once the action settled, it was a perfect 1-2-3 finish for Toyota Alabang with Estefano Rivera getting the top spot. He was then followed by teammate and Cebu’s back-to-back winner Andres Calma with a mere 0.500 sec gap separating the 2. Bobby Domingo completed the podium in 3rd.

Giving credit where credit is due, Allan Uy of Toyota Quezon Avenue grabbed the fastest lap lapping the track in 54.687 sec. 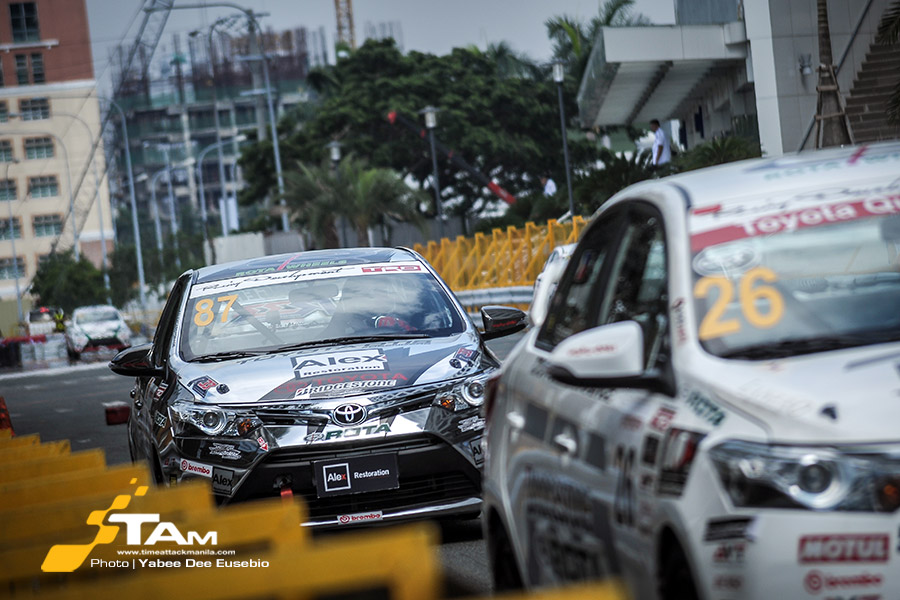 Some drivers, however, were handed 1-position grid penalties for collisions in Race 5. The list included Dominic Ochoa of Toyota Quezon Ave., Charlie Cojuangco of Toyota Dagupan, Pauland Dumlao of Toyota San Fernando, and Raymond Ronquillo of Toyota Balintawak. Youngster Daniel Miranda, on the other hand, received a 2-position grid penalty plus a 30 sec penalty, while Harold Ong was disqualified for ignoring the flags.

Race 6 saw a similar feisty start. Rivera again grabbed the top spot, while 2nd place went to Miranda despite colliding with Dumlao. Domingo was able to hold onto 3rd despite being pressured by Ronquillo. The track slowed down though considerably with Steve Bicknell of Toyota San Fernando taking a fastest lap of 1:01.589s.

Unfortunately for Dumlao, his collision with Miranda ended his race. Uy crashed heavily exiting the chicane due to a dislodged ball joint in the front axle, while Ochoa and Jette Calderon did not start the afternoon race due to mechanical problems. 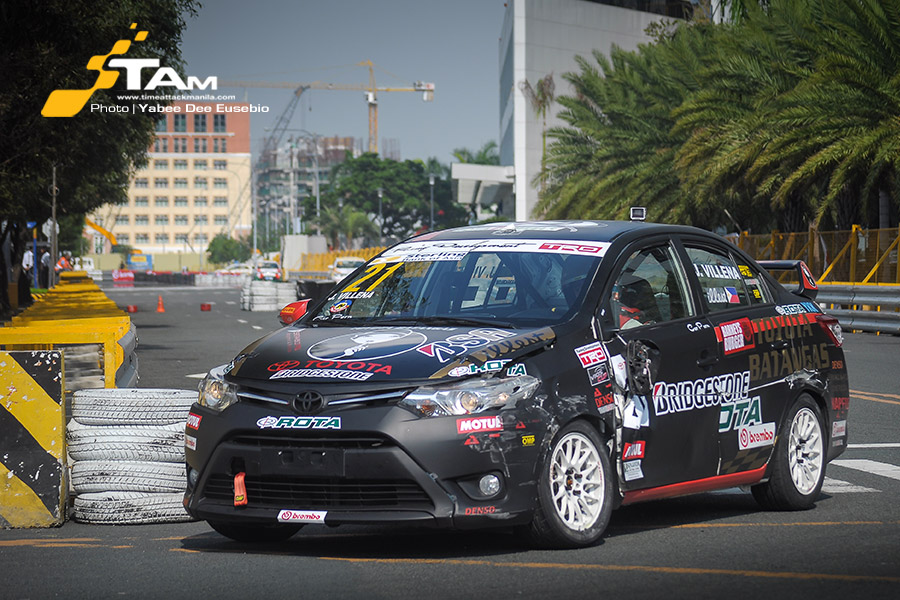 Promotional Class
In a grid of 20 drivers, it was Miguel Diaz of Toyota Alabang who dominated the Promotional Class finishing in 1st in both races. A battle between Lord Seno, Edwin Yu Lee, and Alexis Salvador of Toyota San Fernando was cut short when Salvador ran over the chicane which led to a tire puncture. This left Seno and Lee in 2nd and 3rd, respectively. 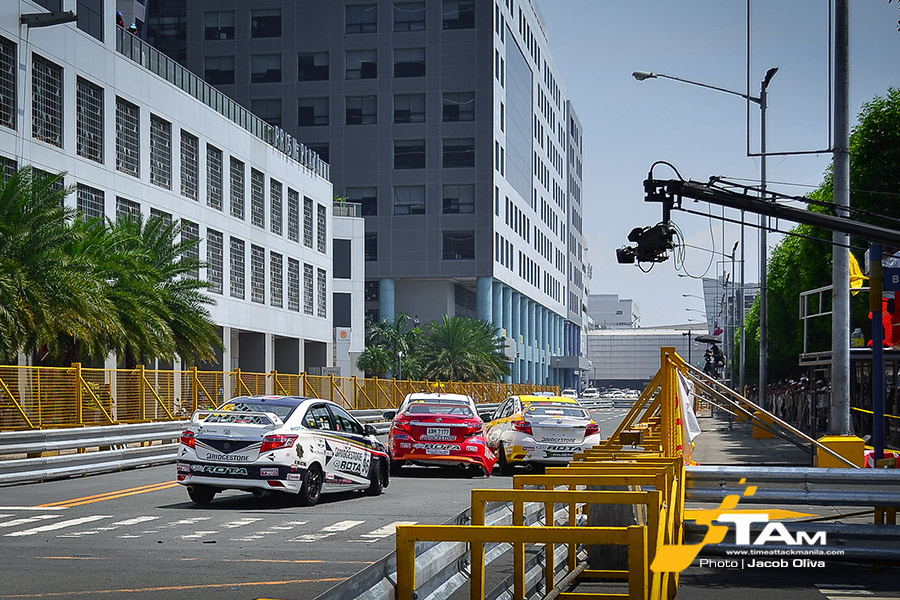 Celebrity Class
As for the Celebrity Class, mechanical woes in Sam YG’s car saw Phoemela Baranda take 1st place in Race 5 with Jinno Rufino in 2nd while Fabio Ide came in 3rd. Joyce Pring managed a respectable 4th, but Kylie Padilla and Jasmine Curtis-Smith both failed to finish after colliding with the barriers.

Sam YG bounced back in Race 6, putting a sizeable gap between him and Baranda. Rufino dropped down to 3rd while Ide crashed after the chicane.

Unsurprisingly, the 3rd round of the 2015 Vios Cup was a vague reminder of what transpired last year at McKinley. Bumpers and side view mirrors flying off and cars ending up in the barriers were constant occurrences. Despite all this, no drivers or spectators got hurt. It was a great job by Toyota Motor Philippines (TMP) and Tuason Racing for once again bringing motorsports to the Metro. 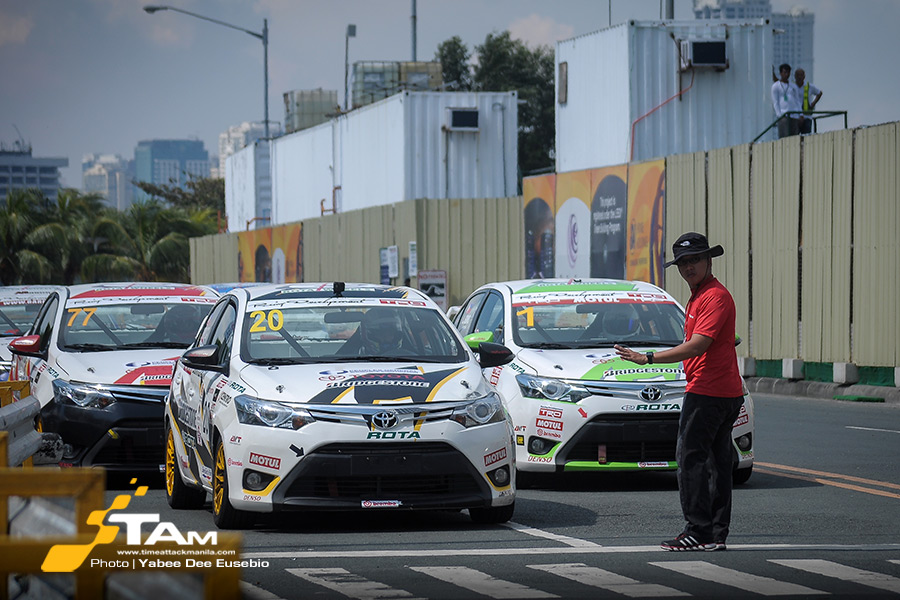 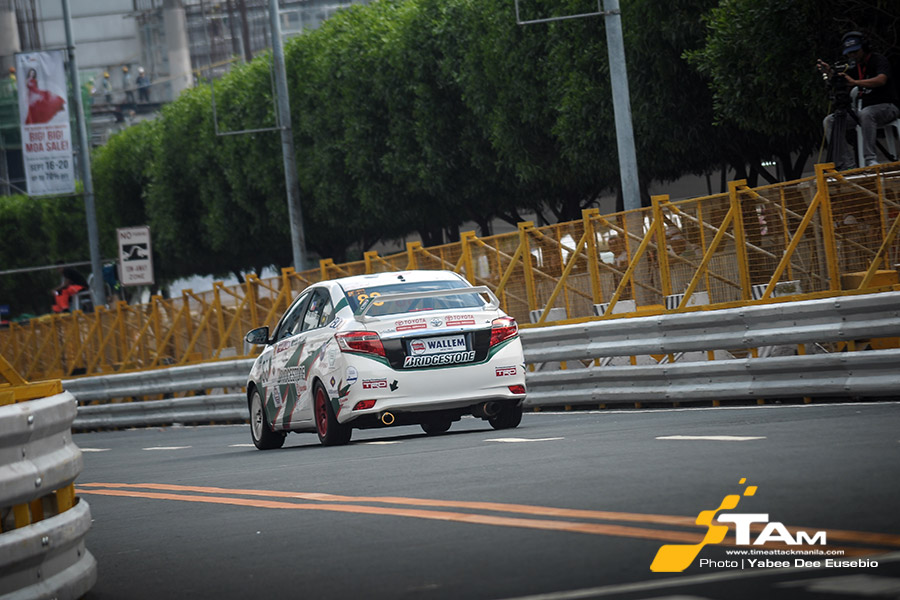 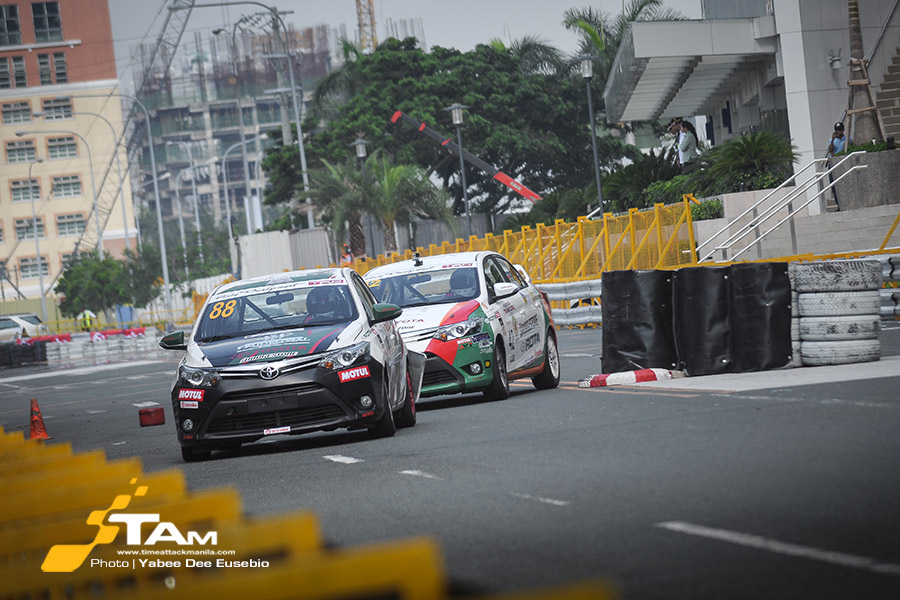 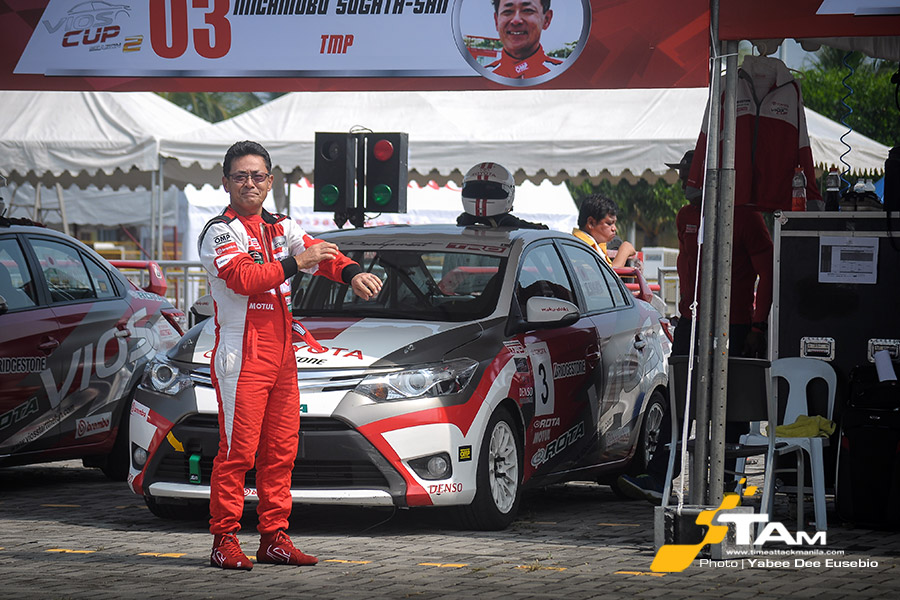 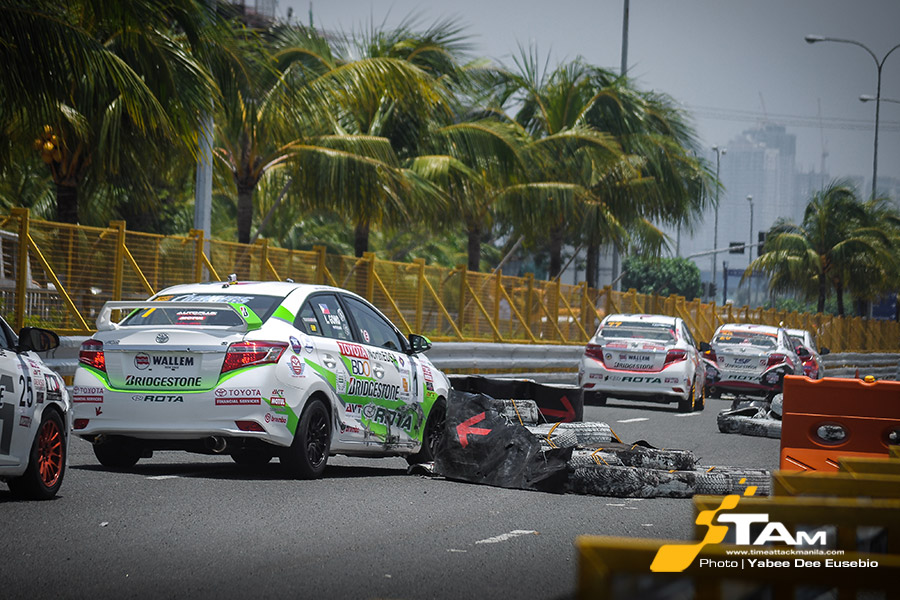 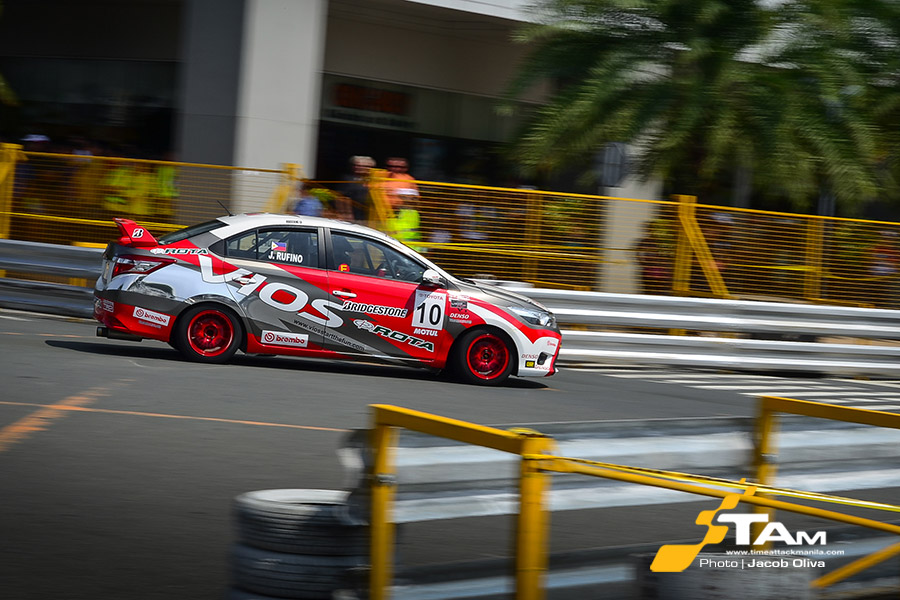