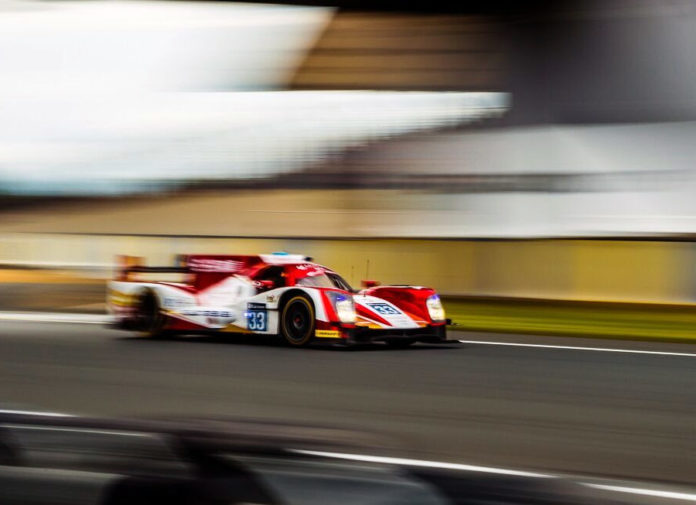 It’s a historical milestone to have a Philippine-based team line up on the grid of 24 Hours of Le Mans, even more so to have one cross the finish line. LeSports by Eurasia Motorsport did just that at the twice-around-the-clock race finishing 5th in LMP2 and 9th overall.

With its drivers Kevin Pu Jun Jin, Nick de Bruijn, and Tristan Gommendy, the trio managed to top the LMP2 time sheets during the first test day. A week later, they were making good progress during the rain-affected qualifying that is, until Pu Jun Jin ran wide and collided with the barriers. The Chinese driver emerged from the wreckage with bruising on his right root and was forced to sit out the following sessions.

The No. 33 ORECA 05 Nissan, however, was in pieces with damage to the front and rear bodywork, flooring, suspension, and driveshaft. The crew pushed to repair and rebuild the ORECA 05 overnight to make it to qualifying the next day where Gommendy and de Bruijn put the team 11th on the LMP2 grid and 20th overall. Thankfully, Pu Jun Jin was also cleared by the medical center to be fit enough drive.

At exactly 3:00 PM CET on Saturday, the 84th edition of the 24 Hours of Le Mans got underway behind the Safety Car due to a torrential downpour. But just as the race went green, Gommendy had to make a lengthly pitstop to fix a gearbox sensor problem that dropped them 2 laps behind.

When he rejoined, the Frenchman drove a remarkable double-stint in drying conditions to climb back to 22nd overall before Pu Jun Jin jumped in, followed by de Bruijn. Darkness quickly enveloped the 13.6 km Circuit de la Sarthe and by the dawn broke, LeSport by Eurasia Motorsport found itself 5th in LMP2.

The team maintained its position throughout the race, putting on solid stints between the 3 drivers, staying out of trouble, and managing fuel, tire, and brake usage wisely. This went on until the 24th hour when the chequered flag dropped, securing the team 5th in LMP2 and 9th overall. And did I mention that this was their Le Mans debut?

As the name suggests, Eurasia Motorsport is a fusion of both European and Asian talent. They may not have won, but their performance is proof that Asian motorsport can compete equally at an international level.

Kevin Pu Jun Jin: “It was amazing to cross the line and see the marshal waving the chequered flag. It shocked me and I wanted to cry, because LeSports by Eurasia Motorsport have worked so hard and ensured nothing went wrong with the car. We went through so much difficult, especially with my practice crash, and it was an honor to take the car to the finish. I have a lot of respect for the competition and to finish fifth in LMP2 is special.”

Nick De Bruijn: “This is our best result; finishing 5th in an LMP2 field that’s so competitive at Le Mans is like a victory. I went into this with no expectations and I’m delighted with the way everybody has performed. Kevin injured his foot, but pushed through, and Tristan can always be relied on to do a great job.”

Tristan Gommendy: “It’s a big day for everybody at LeSports by Eurasia Motorsport. For many it’s their first experience of Le Mans and I don’t think the team realizes how much they’ve achieved just by finishing the race. To finish in the top 5 on this level is tough and it’s a great day that we must enjoy.”

Mark Goddard, LeSports by Eurasia Motorsport Team Principal: “This is a reflection of where Asian motorsport is at the moment, because we are an Asian-based team and we’ve come to what is widely recognized as the world’s biggest motor race and finished 5th in class and 10th overall. It has been a hard week for everybody and we’ve been very impressed by Kevin Pu Jun Jin’s pace, the step Nick de Bruijn has taken, and Tristan Gommendy confirmed how quick he is. This is a massive achievement and there are no words to describe how it feels.”