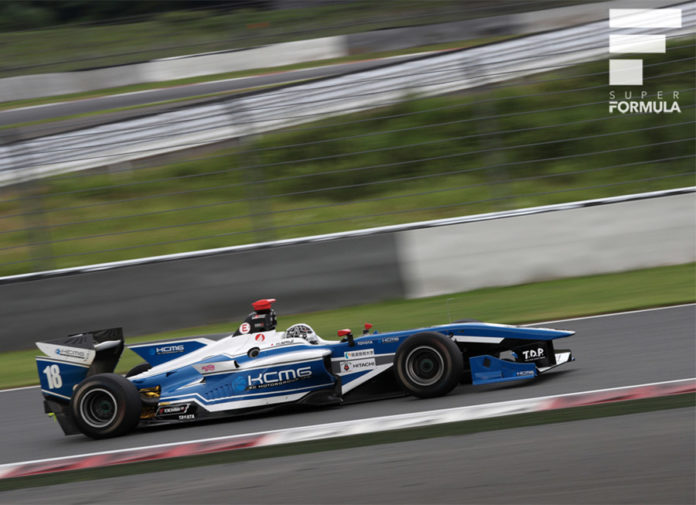 It would have been nicer to win, but 2nd place isn’t so bad specially when you’re Kamui Kobayashi and score your team’s very podium in Super Formula, right? That’s not a bad way to wrap up a weekend at Twin Ring Motegi. Not bad at all.

Things started with Kobayashi placing the Toyota-powered #18 Elyse SF14 P2 on the grid during qualifying. This marked KCMG’s first-ever front row start in Japan’s top single-seater series. Then, he got off to a perfect start for Sunday’s 52-lap race and easily took the lead from pole-sitter Kenta Kamashita of Kondo Racing.

Kobayashi’s lead would have grown to over 3 secs by lap 5, then to 14.6 secs by lap 21. It was all looking good so far. On lap 34, he went to the pit for a routine stop for fuel and a fresh set of tires. Then sh*t hit the fan. The team had trouble fitting the right rear wheel, lost a huge amount of time, and ended all hopes of an outright victory.

The Japanese driver rejoined in 2nd where he would eventually finish the race, 18.583 secs behind Team Mugen’s Pierre Gasly. On the bright side, he did earn KCMG’s first ever podium in Super Formula since the team joined in 2010.

Kamui Kobayashi: “Overall, it was a good weekend as everybody in the team worked extremely hard over the past few months and this result proves that we have a package that can win. Frankly, it wasn’t the result that I was aiming for as I was gunning for victory but still, it was satisfying to be able to provide KCMG with their first podium in Super Formula. It was a hard race and we still have a lot of work to do but this result is a positive step forward.”