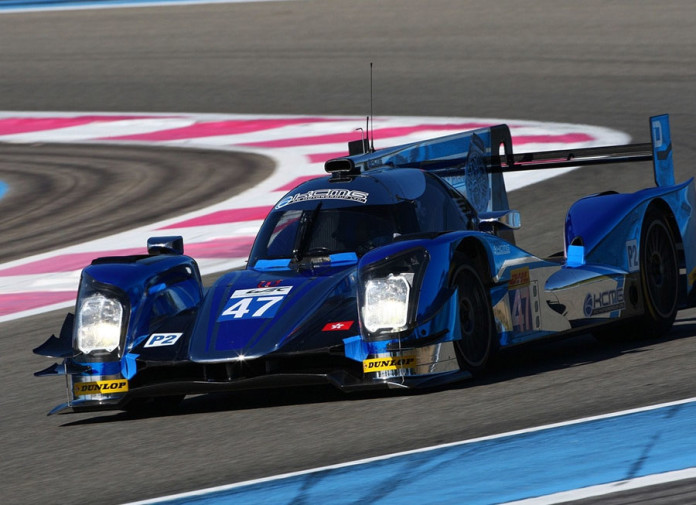 With a brand new ORECA 05 and a matching new electric blue livery, the boys at KC Motorgroup Ltd. (KCMG) started 2015 on a high note after setting the fastest time in LMP2 at the FIA World Endurance Championship’s (WEC) pre-season test.

The 2-day test, held last March 27 to 28 at the Cicuit Paul Ricard, allowed the Hong Kong-based team’s 4 drivers to get some valuable kilometers behind the new machine. Yes, 4. That’s because after the annoucement of a 3-driver line-up earlier this month, KCMG went ahead and signed Toyota LMP1 reserve driver Nicolas Lapierre for 2 rounds this season. With Toyota Motorsport GmbH’s (TMG) consent of course.

The 30-year-old Frenchman will drive for KCMG alongside Richard Bradley and Matt Howson at the 6 Hours of Spa Francorchamps and the famed 24 Hours of Le Mans.

As for the pre-season test, KCMG’s Nissan-powered ORECA 05 was quickest throughout Friday’s morning and evening sessions around Paul Ricard’s 5.809 km configuration. Techincal issues, however, cost them valuable track time on Saturday. Still, Bradley, Howson, Nick Tandy, and Lapierre managed to logged a total of 98 laps between them. One of which clocked in at 1:47.456, making them the quickest LMP2 out of the 9 other prototypes.

If they could maintain that performance throughout the season, then they should have no problems winning the 6 Hours of Silverstone in 2 week’s time. But if only it was that simple. We’re quite sure that KCMG will be working hard to kick start the season with a race win.

Richard Bradley: “I’m very happy with how the test went as we’ve had great runs, especially during Day 1. We definitely have the pace, but there are still areas that need to be improved. Stringent preparations are underway as we inch closer to WEC’s first event at Silverstone and I cannot wait for the real racing action to start!”

Matt Howson: “Prologue 2015 CONFIRMED we are much better prepared for this season and it was great to have Nico and Nick present, they fit in very well with the team. Still plenty of refinements to make so we look forward to hitting the track at Silverstone in 2 weeks!”

Nicolas Lapierre: “It was very nice to meet the team and to get to know my new teammates. We’ve had a productive time testing but since this is a new car, there are some teething problems and we still need to develop it further. But from what we’ve seen yesterday, the car has a good pace and it’s efficient in tyre management as well. I wish the team good luck for Silverstone and I’m looking forward to be back in the car again at Spa!”

Nick Tandy: “It was my first run in the new car and first time at the track with the team. We encountered some technical issues, which is normal for a new car, that is why we go testing before we start racing. But overall, I was extremely happy with the speed of the LMP2 and how the team cooperated together. I felt very welcome as a new member of the team and happy that we ended up fastest overall in the two days of testing. I’m looking forward now to the first race at Silverstone.”

Erich Kolb, KCMG WEC Team Manager: “It was not a flawless weekend, but nonetheless we are happy with the car’s pace. We wrapped up the two day test with the fastest time set by an LMP2 and we’re very pleased to been able to have that opportunity to work with all our drivers at Paul Ricard. It was a very productive outing ahead of WEC’s first race and we’ll do our best to deliver top results at Silverstone.”