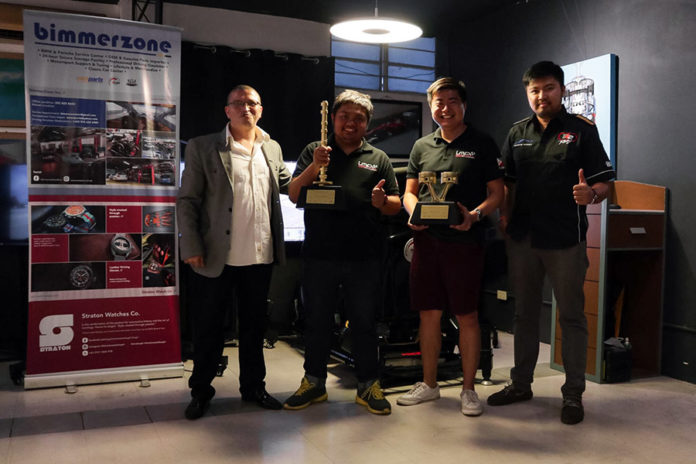 After over a month of time trials and elimination matches, Luis Moreno emerged as the champion of the ‘World Class Competition in Manila’ hosted by Pro Simulation Karera (PSK).

PSK staged the sim racing challenge at Bimmerzone in Makati. Using Vesaro Simulators, equipped with a Fantec steering wheel and pedals, competitors had to drive a BMW Z4 GT3 race car around the Watkins Glen ‘Boot’ Long Course on iRacing.

The qualifying period lasted from October 12 until November 25. Each driver paid an entry fee of P1,500 and was given an hour to set their best lap time. They could then try as many times as they wanted provided they pay the hourly fee.

Following that, the Top 12 drivers were matched against each other in a series of knockout rounds. Races would last 30 minutes each where the winner would advance into the semi-finals, then onto the finals.

Luis Moreno of Lallave Motorsports Project (LMP) would set a best lap of 1:48.388 in the time trials, making him 7th quickest overall. He was then matched against Madison Valdez and Daryl Brady on the first 2 elimination rounds, defeating both drivers through his consistent pace.

Along with him, 2 other drivers also made it through the semi-finals, namely Jan Lacuna and LMP teammate Terence Lallave. All 3 were matched up against each other where Luis and Terence faced-off in the finals. There, Luis started from pole position and never looked back. He managed to hold onto the lead throughout the race until the chequered flag dropped.

By winning the final match up, Luis takes the overall ‘World Class Competition in Manila’ title along with a trophy and the P50,000 cash prize. Following him in 2nd place is his LMP teammate Terence Lallave, while Jan Lacuna secured 3rd. Terence and Jan wins P15,000 and P10,000 worth of seat time in PSK’s simulators, respectively plus 1 free change oil service courtesy of Bimmerzone.