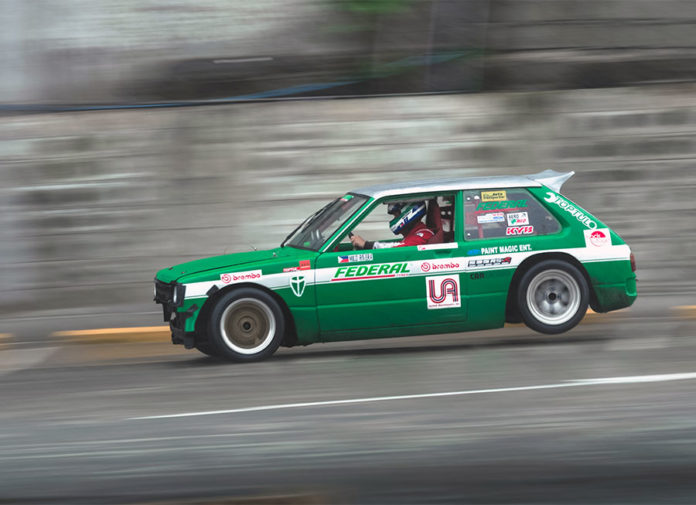 Held last June 16, the 4th round of the 2018 Philippine Autocross Championship Series (PACS) proved to be very challenging for all competitors due to mixed weather conditions. But this paved the way for a great showdown for the overall best time of the day, ultimately won by Milo Rivera of Federal Tires – Tough Gear Racing.

13-year-old Iñigo Anton of Mark Young Racing set the bar high early in the day with a 31.06 secs run. The record stood until Milo set a 30.51 secs best, which was snatched back by Iñigo hours later with a 30.48 secs blazer on a dry track. As Milo was setting up for another run, a thunderstorm drenched the autocross track in SM Novaliches and ruined his chances of reclaiming the top spot.

“When it rained hard at 3:00 PM we thought that it just wasn’t going to be our day. The timing of the rain was just terrible”, Milo commented.

However, the rain stopped later that afternoon and the track started to dry up. This gave the 4-time National Slalom Champion a slight glimmer of hope. He gambled on one final run as he knew it could rain again at any moment. Driving his trusty 1981 Toyota Starlet KP61, Milo miraculously managed 30.25 secs despite the slightly damp surface to set the best time of the day.

As predicted, the storm returned right after and prevented Iñigo from making another attempt. This secured Milo his third win in the Philippine Autocross Championship Series (PACS). He now extends his PACS overall lead and is closer to the 2018 crown with half of the season left.

Milo Rivera: “This was by far the most intense race of the year. We thought we had no chance after the strong downpour, but we never gave up and made the most out of the small opportunity we had. This was an unforgettable race and all praises to the Man above for the experience no matter what the outcome was.”