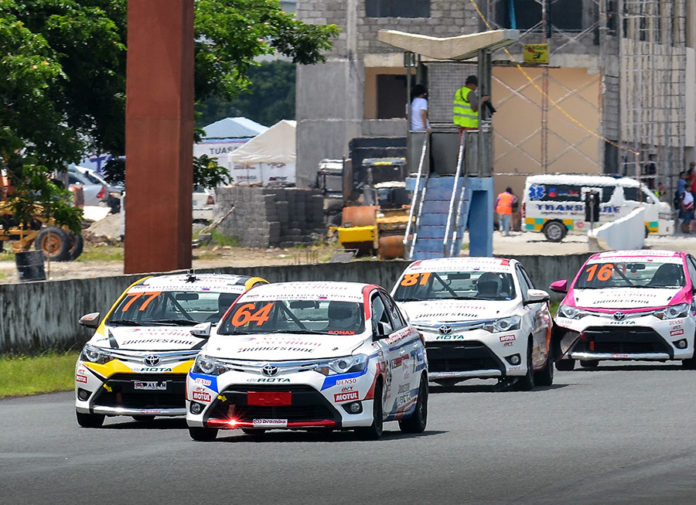 Toyota Motor Philippines finally ended a long 3 month break when it staged Round 3 of the 2017 Vios Cup last September 15/16. This allowed Toyota San Fernando (TSF) to return to the 4.189 km Clark International Speedway (CIS) and get their fix of adrenaline over the weekend.

Mixed weather once again added to the Vios Cup’s challenge like in the previous event. It was scorching hot in the morning and soaking wet in the afternoon. While some found this unnerving, the TSF drivers thoroughly enjoyed racing under variable conditions. And of all of them, Arbie Jacinto in the #64 machine enjoyed it the most with a 2nd place finish in the ROTA Promotional Class. 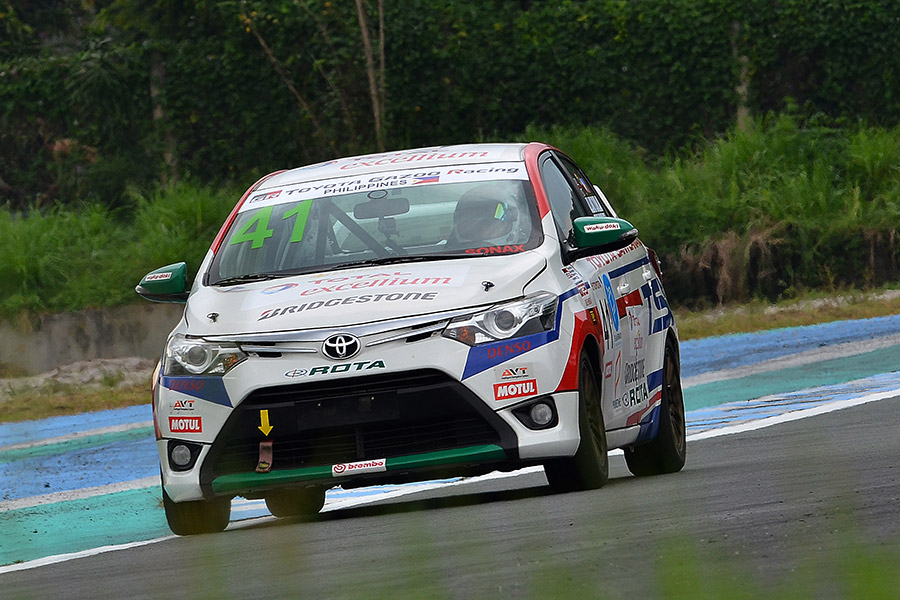 Total Excellium Super Sporting Class
TSF Team Manager Pauland Dumlao made a rare one-off appearance this season, standing in for an unwell Steve Bicknell. He took over the #41 car and put it in a respectable P10 in qualifying. As he wasn’t fighting for the championship, Pauland focused on driving a clean race and brought the car home in one piece. He climbed as high as 6th in Race 1 and finished 8th then completed Race 2 in 11th. 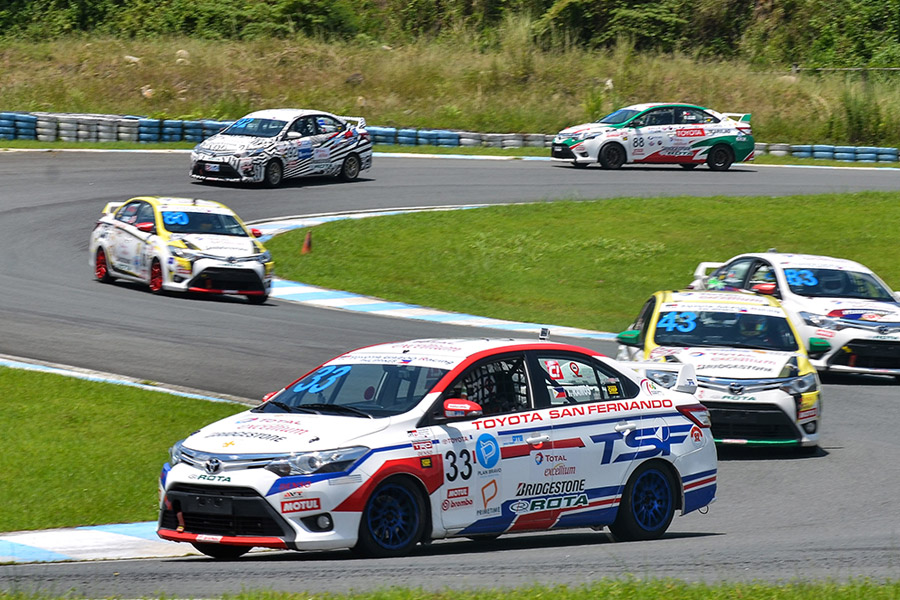 Bridgestone Sporting Class
Things looked promising for Oliver Matias and Ton Ramos. The pair started from P7 and P8 on the grid in the morning, but their hopes of getting a good result was thrown right off the line. Ton was hit from behind, spun into Oliver’s path, and the 2 collided on the main straight. The pair then played catch up throughout the 10 lap race.

Oliver crossed the finish line in 11th, while Ton was a place down in 12th.

The afternoon’s heavy downpour was favorable for Ton who carried an extra 30 kg ballast in the #33 car. He worked his way from P12 up to as high as P5. However, he lost some places when his windshield started to fog up and finished in a well-deserved 7th place.

It was also an exiting 7 laps for Oliver in the #48 car who had his own battles in the rain. He made up several places, but a costly spin at turn 1 dropped him down to 14th where he ended the race. 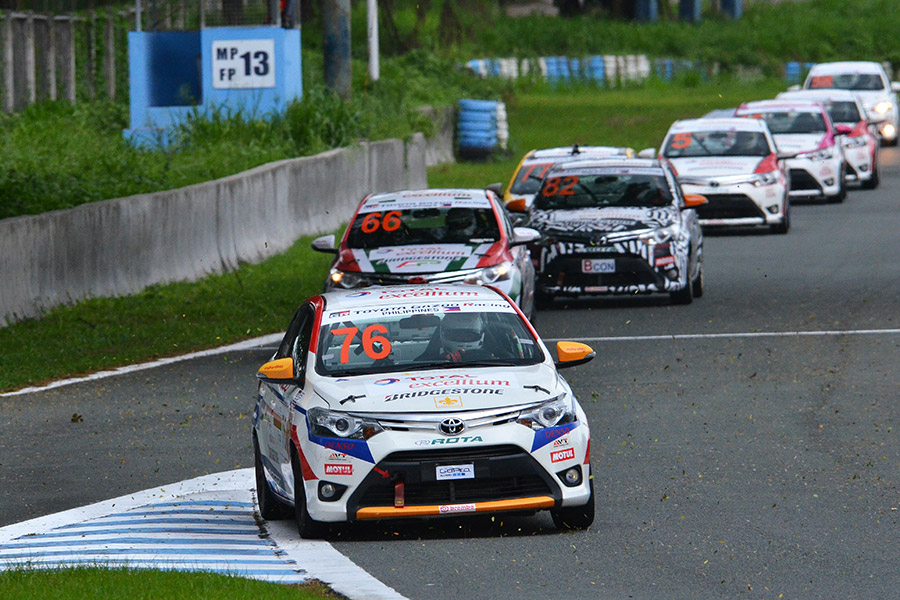 ROTA Promotional Class
Despite missing out on the previous leg, Darrel Garbes was immediately on pace and secured P3 in Qualifying, beating his teammate Arbie Jacinto who was P5 in the session. Still, Arbie had the better start in Race 1 and avoided the chaos that ensued amongst the front runners. He may have lost his rear bumper on lap 9, but he didn’t lose his cool and took the chequered flag in 2nd, scoring a podium for TSF.

Darrel in the #76 car didn’t do so bad either, driving a clean race to bag 6th place.

Sadly for Arbie, he was unable to repeat his performance in the afternoon. Another driver collided with the #64 machine and caused enough damage to force Arbie to retire on lap 2. Darrel, on the other hand, had a much better race. He was 2nd most of the time and briefly had the lead. But the rain made it difficult for Darrel and finished Race 2 in 4th, only 7.598 secs behind the winner. 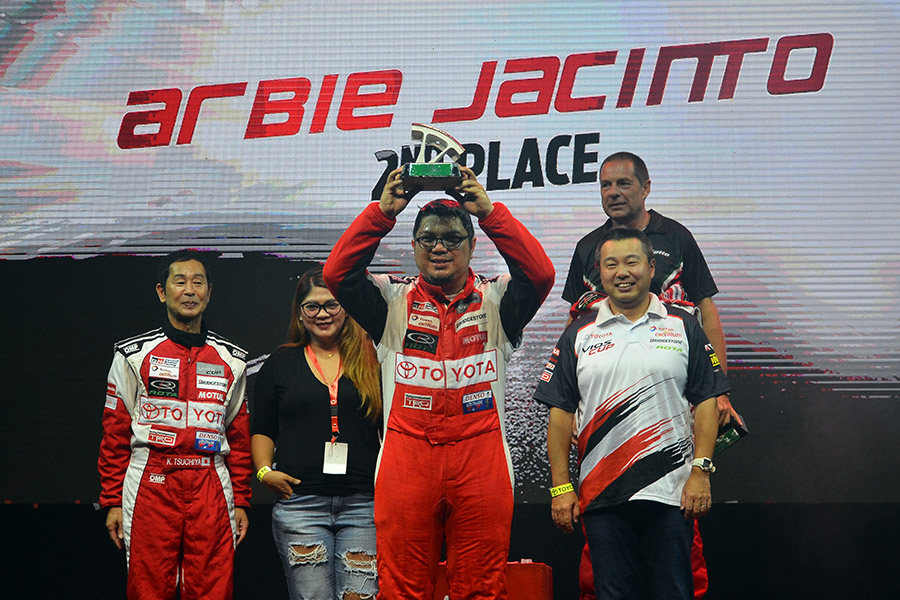 It was a tough weekend for Toyota San Fernando, riddled with race incidents and DNFs. On the bright side, Arbie’s podium does gives the team something to celebrate. Admittedly it wasn’t their day, but they vow to come back stronger on the season finale. 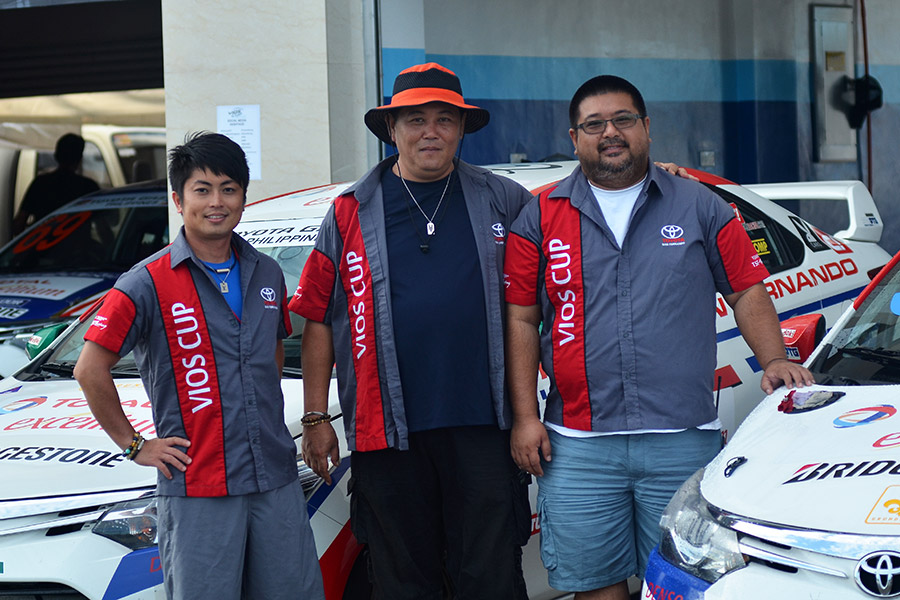 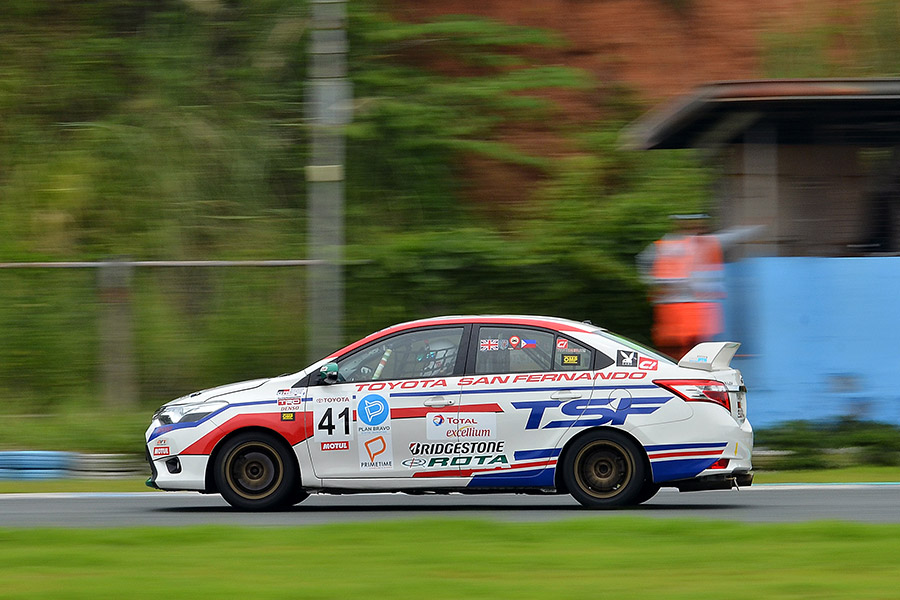 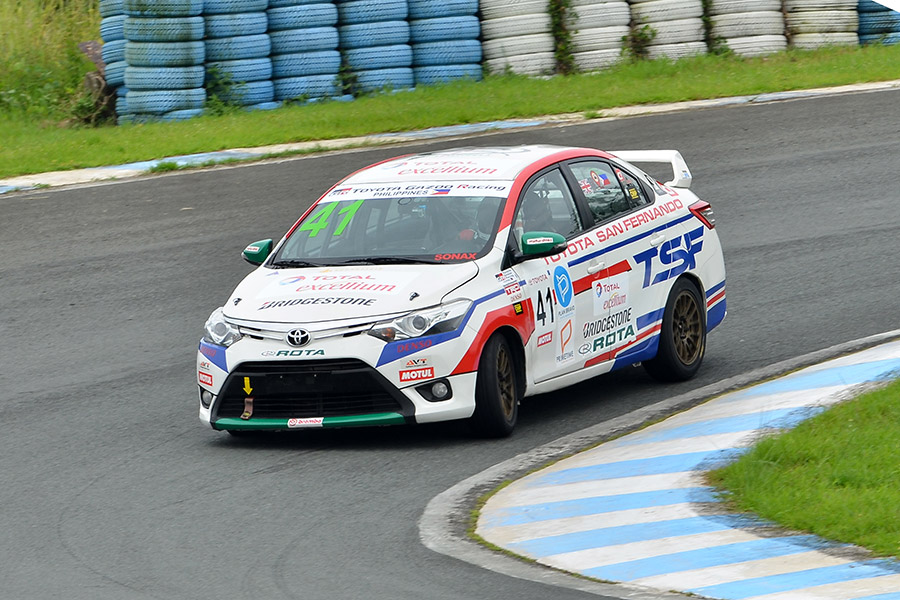 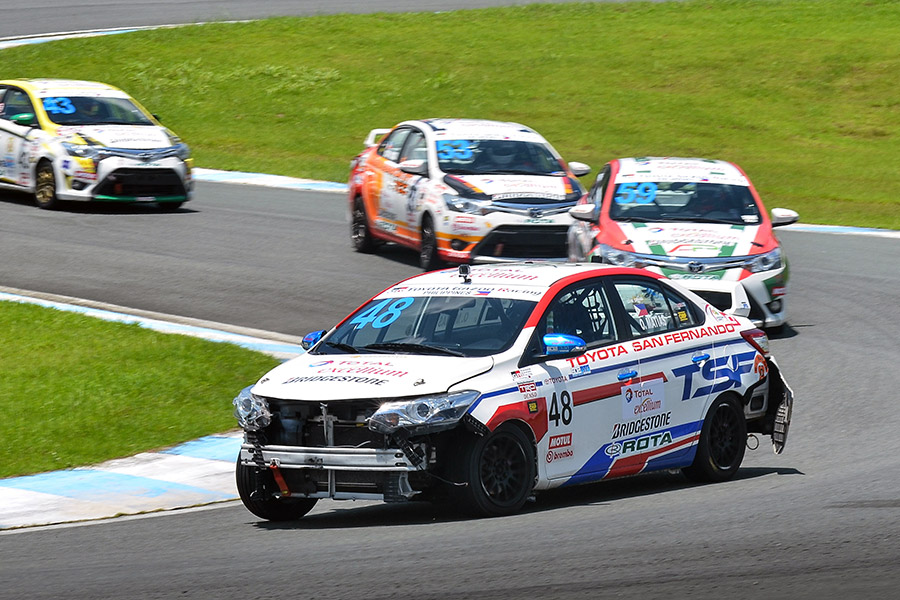 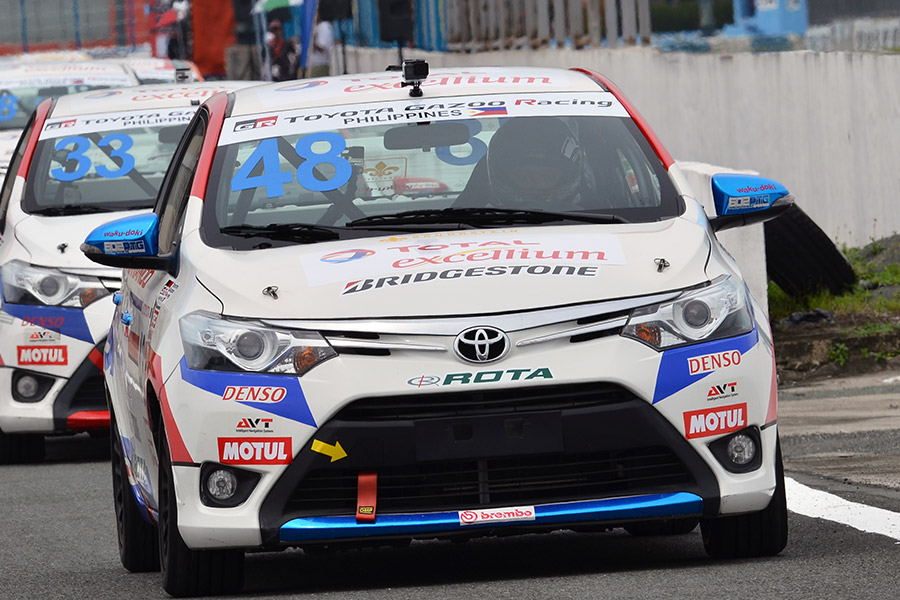 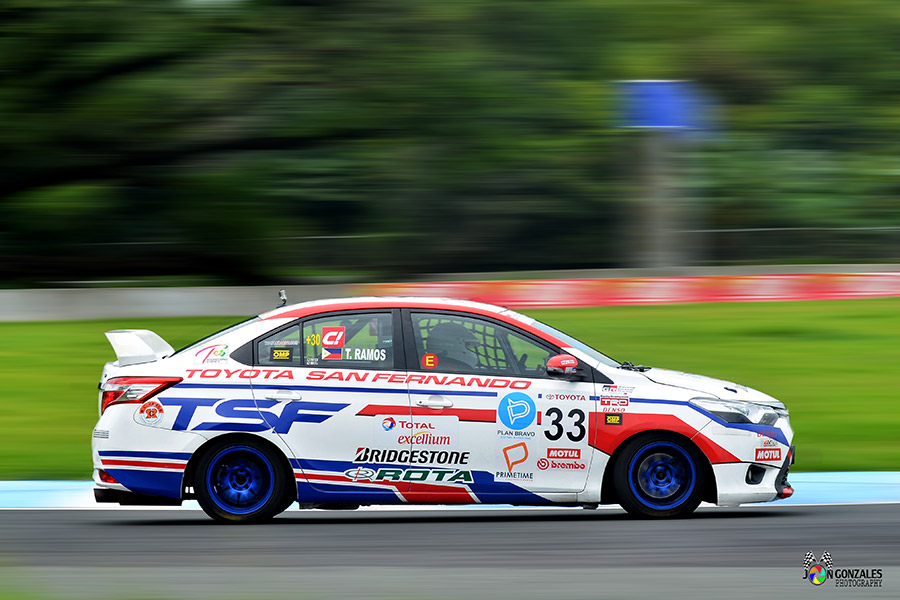 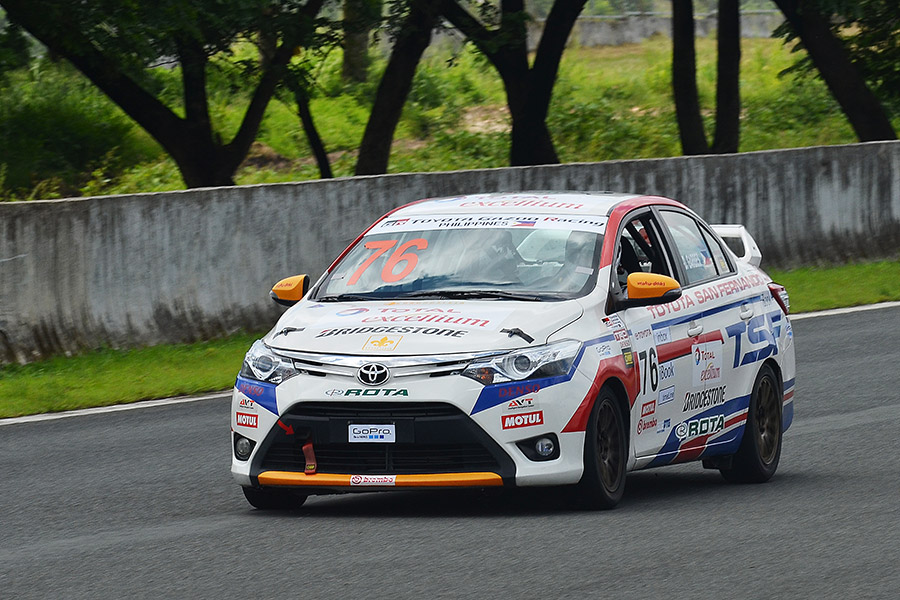 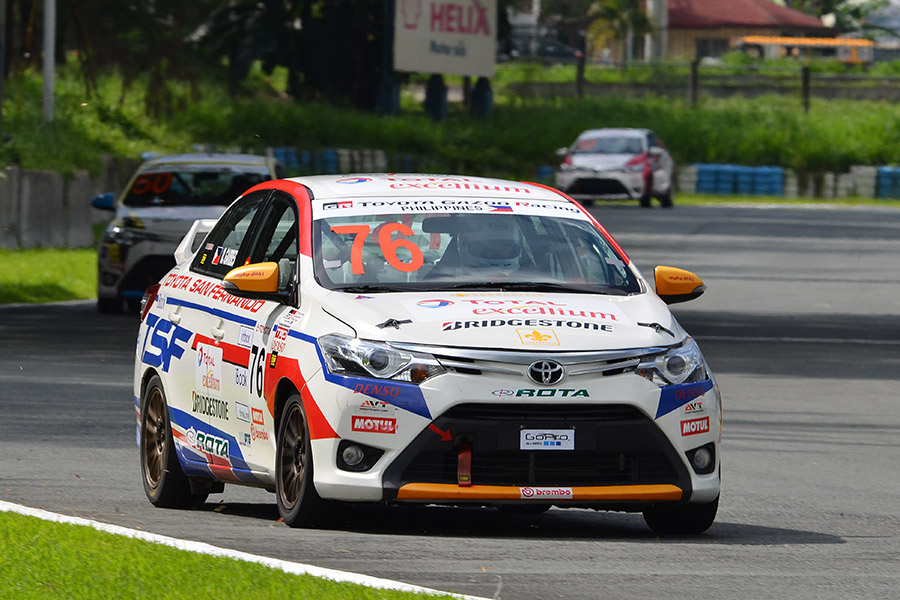 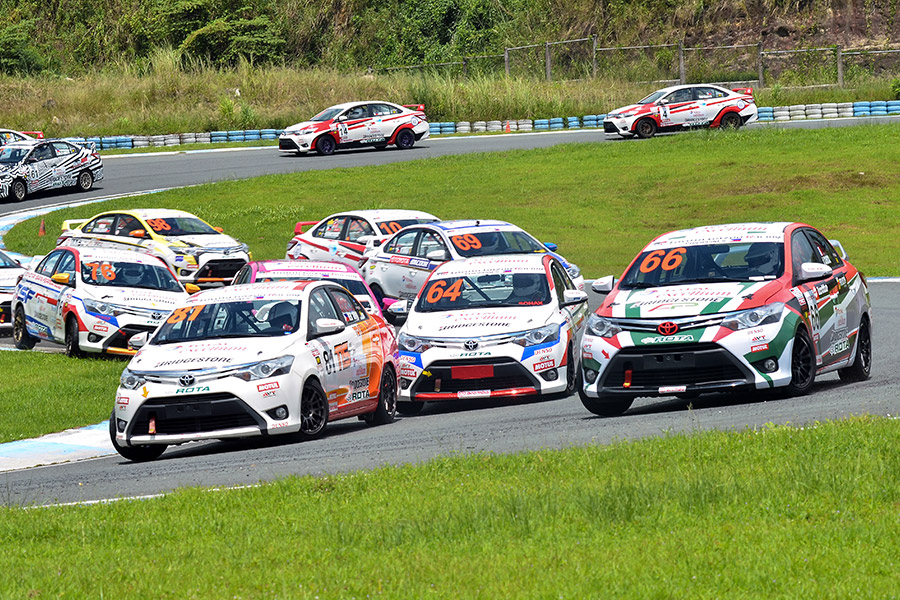