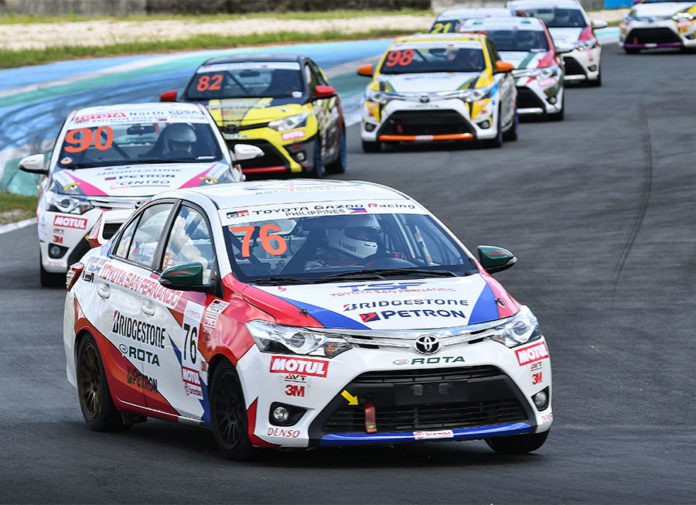 Headed by Darrel Garbes and Ton Ramos, Toyota San Fernando (TSF) welcomed new challenges at the opening round of the 2018 Vios Cup. The race weekend was blessed with clear, sunny conditions and featured 3 races over 2 days.

Darrel’s efforts would nearly land him a podium finish in the Promotional Class. Meanwhile, Ton made his debut in the top-tier Super Sporting Class last April 27/28 at the Clark International Speedway (CIS). 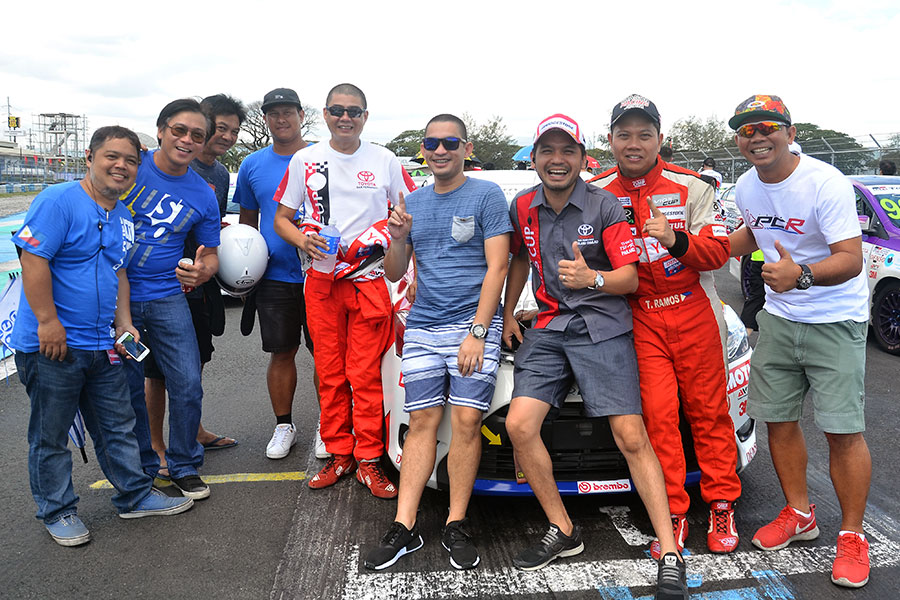 “The jump to Super Sporting ins’t that big,” quipped Ton. “It’s the the lack in prep time and practice that set us back. I was supposed to retire at the end of last year, but the opportunity to race for TSF in the top class was too hard to resist.”

The #33 Vios Cup Car was almost 4 secs off the pace in Qualifying. Undeterred, he fought his way through the field in Race 1 on Friday. There was a fair amount of dicing and contact during the race, but Ton managed to escape with only minor damage and finish 12th. 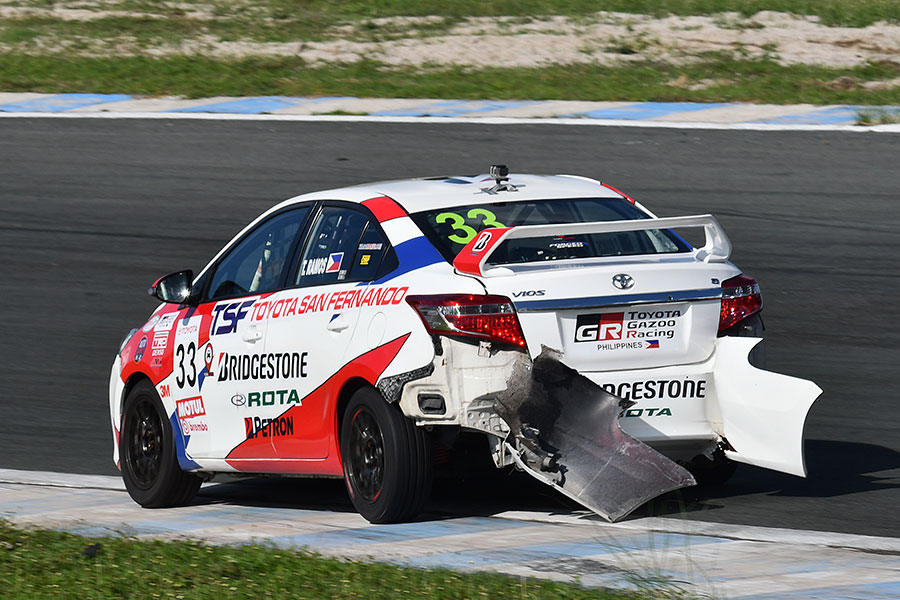 With tensions running high, Ton was involved in a multi-car incident on the opening lap of Race 2 on Saturday. He was lucky to be able to rejoin despite dropping down the order. Ton avoided another first-lap pileup in Race 3 and stayed away from trouble. He enjoyed a clean run to cross the finish line in 11th place. Despite receiving a 1-place penalty for overtaking under a yellow flag, Ton showed good progress by setting his fastest lap all weekend.

“The drivers in Super Sporting are on a different level and I need to catch up. But the Alabang Street Circuit will be a great equalizer where you need luck,” Ton commented. “I want to thank TSF for supporting us again, our mechanics, Jeff De Leon, coach Tetsuya-san, and our Team Manager Pauland Dumlao for taking care of us.” 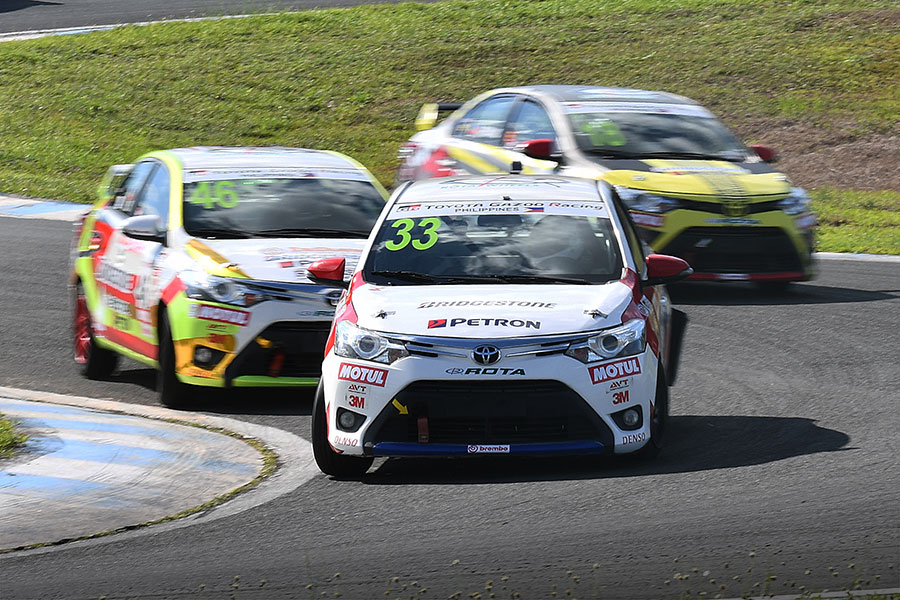 ROTA Promotional Class
Now on his 3rd year, Darrel Garbes made the most out of his experience to fight for podium spots. He got a good start from P11 on the grid and was up to 6th by the end of the first lap in Race 1. The #76 car then maintained position ’til the chequered flag, putting Darrel on pole for Race 2’s reverse grid.

It was only after the race did the team discover that the radiator fan stopped working. Thankfully, the engine didn’t overheat and made it to the finish.

Feeling the pressure, Darrel unintentionally jumped the start in Race 2. He drove skillfully to end the 12-lap race in 3rd spot. However, the 15 sec penalty lost him a potential podium and was moved down to 6th. He made sure not to make the same error in Race 3 and held onto the lead after starting from pole. But it then became a race of attrition for Darrel who struggled with soaring temperatures. He lost several spots in the process and finished the race in 4th. 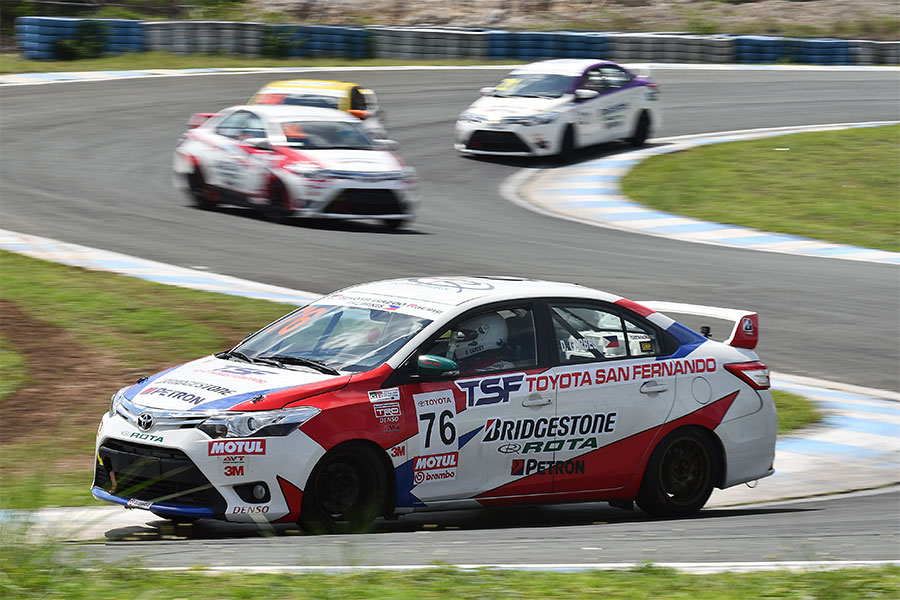 “We encountered some mechanical issues during the weekend, which limited our time to practice. But the team worked hard to source the necessary parts, even borrowing spares from OJ’s car, to get me going. I’d like to thank everyone at TSF for the good results and looking forward to the next race in Alabang,” said Darrel.

There’s a 3-month break ’til the Toyota Vios Cup resumes on July 28/29 at the Alabang Street Circuit. Darrel and Ton will be joined by their teammate OJ Matias who’s racing in the Bridgestone Sporting Class. 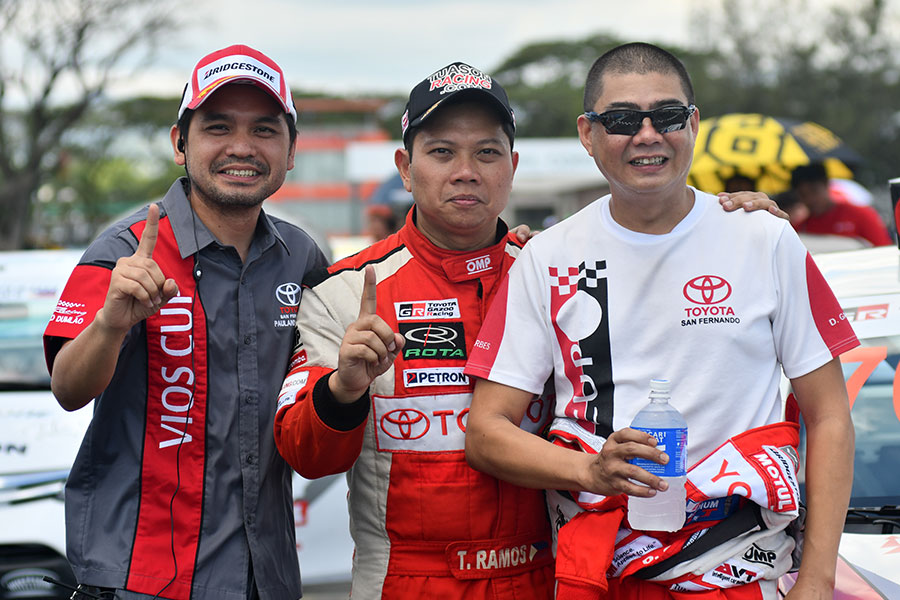 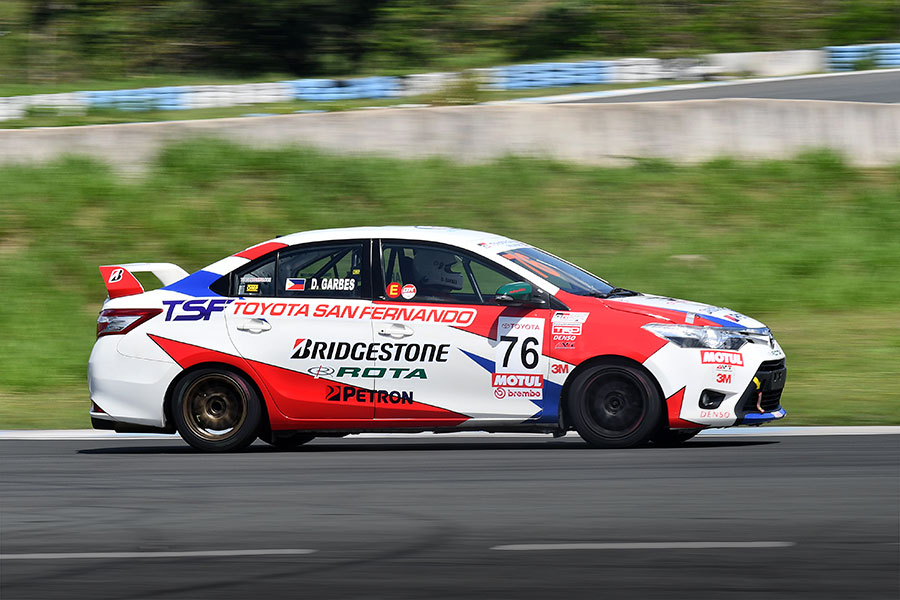 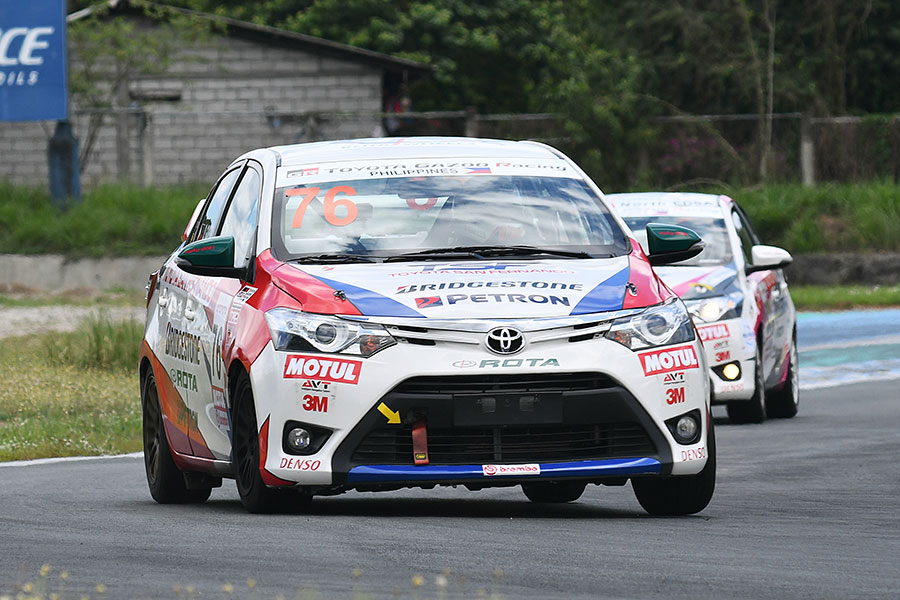 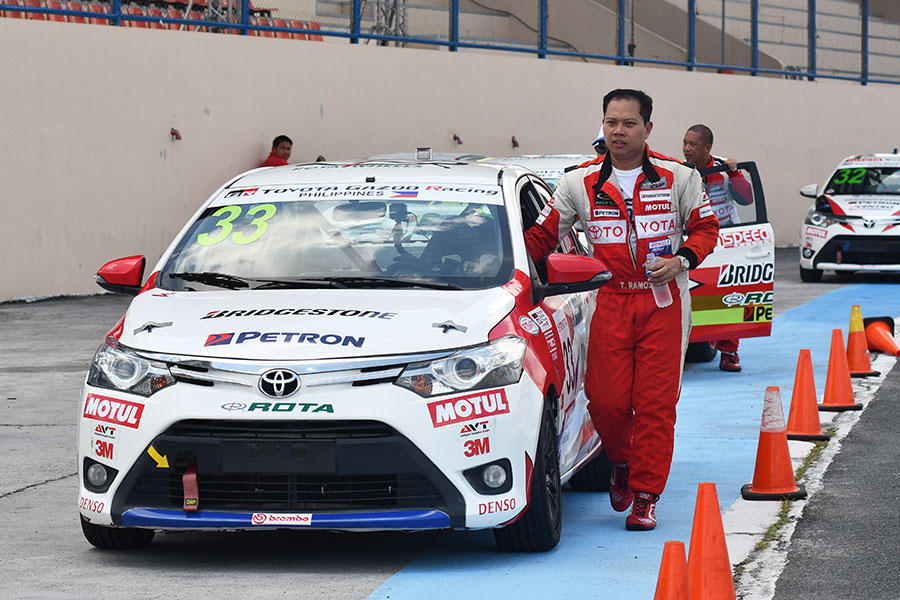 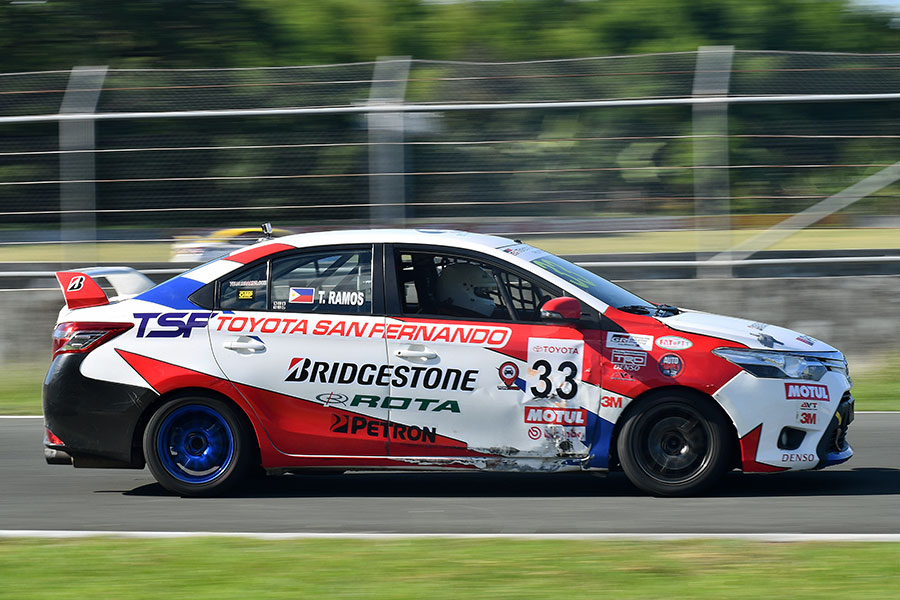 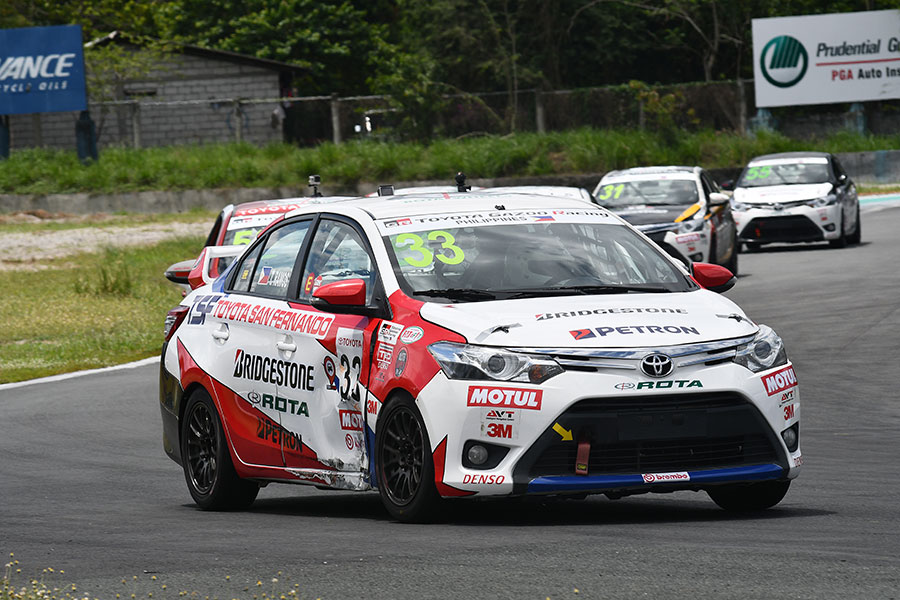