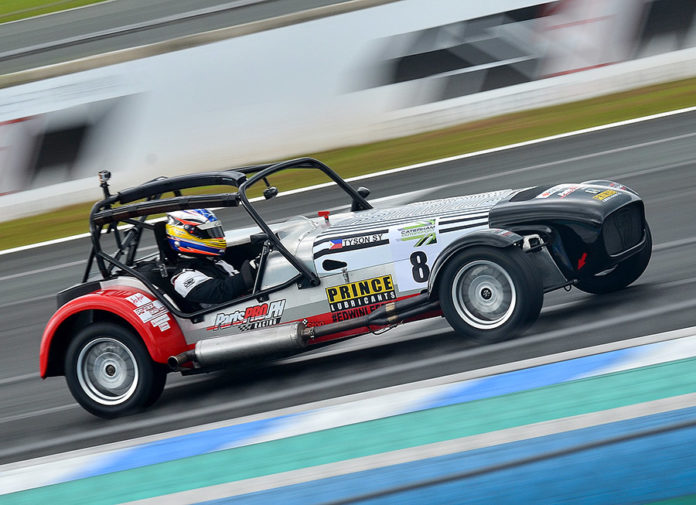 It was a dream weekend for Tyson Sy and PartsPro Racing during the Caterham Motorsport Championship’s visit to the Clark International Speedway (CIS). Competing in the Supersport Class, the team managed to qualify on pole and win all 3 races last October 20/22.

All the 8 Caterham Supersport, including PartsPro Racing’s #8 car, were identical and equipped with a 140 hp 1.6L engine and a 5-speed manual box. But unlike the other drivers, this was Tyson’s first time to race in a right-hand-drive machine.

“It was really hard to shift gears,” Tyson admitted. “Either I mis-shift or select the wrong gear throughout Free Practice. Otherwise, the Caterham is a fun car to drive on track.” 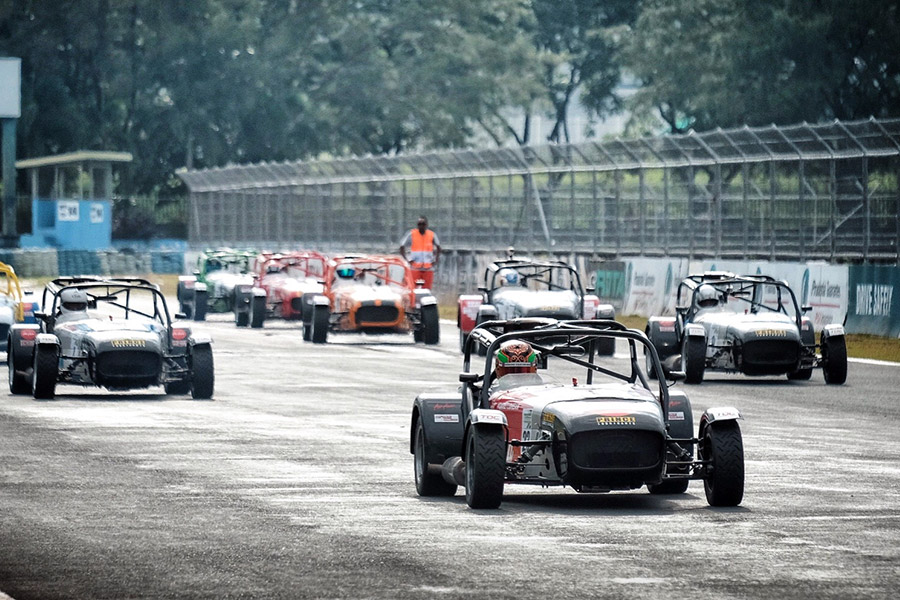 But this failed to slow him down. He ended the Qualifying session P1 in class, besting more seasoned drivers from Malaysia, Sri Lanka, and Singapore. Also, his pole lap was easily 1.981 secs quicker than the time set by championship leader Halim Mu’Azzam. Meanwhile, PartsPro Racing teammate and fellow Filipino driver Jason Choachuy would line up P4 on the grid.

A bad start in Race 1, however, dropped Tyson to P3. He had to work hard to regain his position and was back up to 1st the end of the opening lap. His focus from then on was to push and build a gap between him and the driver in 2nd. After 11 laps, the Councilor of Valenzuela would cross the finish line in 1st winning on his very first outing in a Caterham. 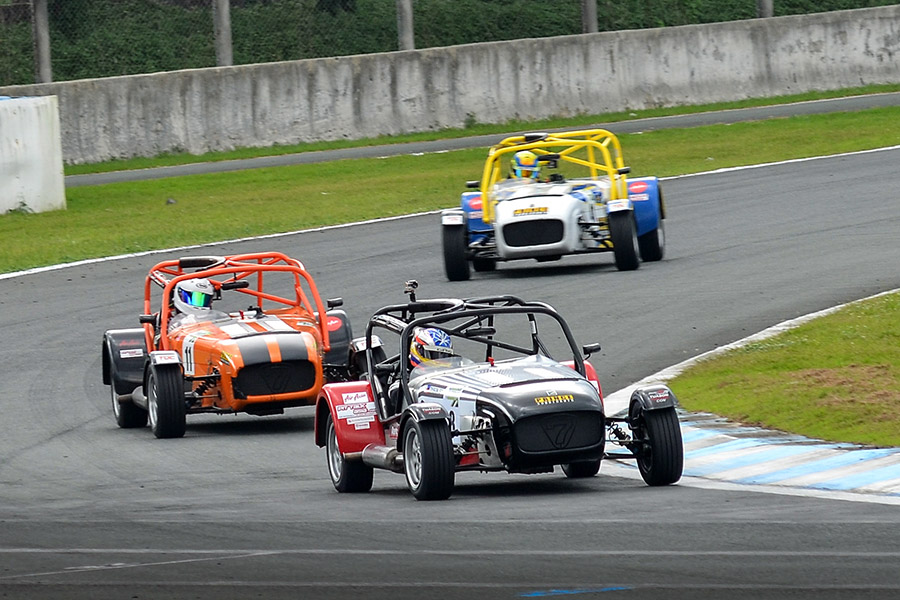 The following day began with another slow start. Tyson found himself in P3 trailing Jason and Halim who were busy fighting for the lead. With his unmatched pace, he had no problems getting past after just a few laps and drive to another dominant victory. Meanwhile, Jason finished the race in a well-deserved 4th.

As with all his starts, the ex-Formula 3 driver lost several positions when the lights turned green in Race 3, this time ending farther down the field. But the team had no doubts on Tyson’s abilities. His skill and determination allowed him to pick through each driver one-by-one ’til he reached 1st. He and Jason even held onto 1-2 positions at one point.

The chequered flag eventually came out after 10 laps where Tyson concluded his Caterham Motorsport Championship debut by winning all 3 races for PartsPro Racing. 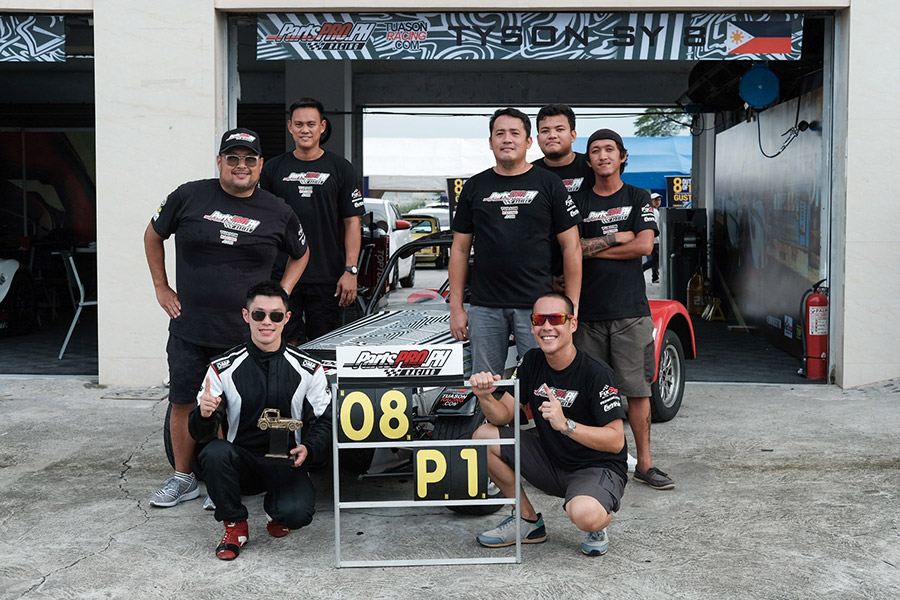 Tyson Sy: “This was my first time in a Caterham and to drive a right-hand-drive. Although it was a challenge at first, I was able to adapt to the car quickly plus I knew the track very well. It was a good and fun experience overall, winning all 3 races in the weekend, which reminded me of my victories in Asian Formula 3. I want to thank God for giving me a safe race and letting me win the races, also to all our sponsors at PartsPro Racing.”

Raffy David, PartsPro Racing Team Principal: “It’s amazing how Tyson didn’t lose his competitive spirit in the 10 years he had been away from motorsports. The organizers from Caterham said that this was the most dominant performance they’ve seen. The mechanics did an awesome job in preparing the car all weekend. Our team manager, Billy Billano, also deserve credit in making this outing successful. A big thank you to everyone in the team and congratulations to Tyson for his victories.”

PartsPro Racing is a race management team that focuses on maintenance and race support for drivers in all types of motorsports. It is sponsored by PartsPro.Ph and Tuason Racing School, with support from POPSY, #EDWINLEEFTW, Fixstop Auto Service, OMP, AutoPerformance.Ph, BCON ( Beredo Construction), Eightdecals, and Imprint Customs. 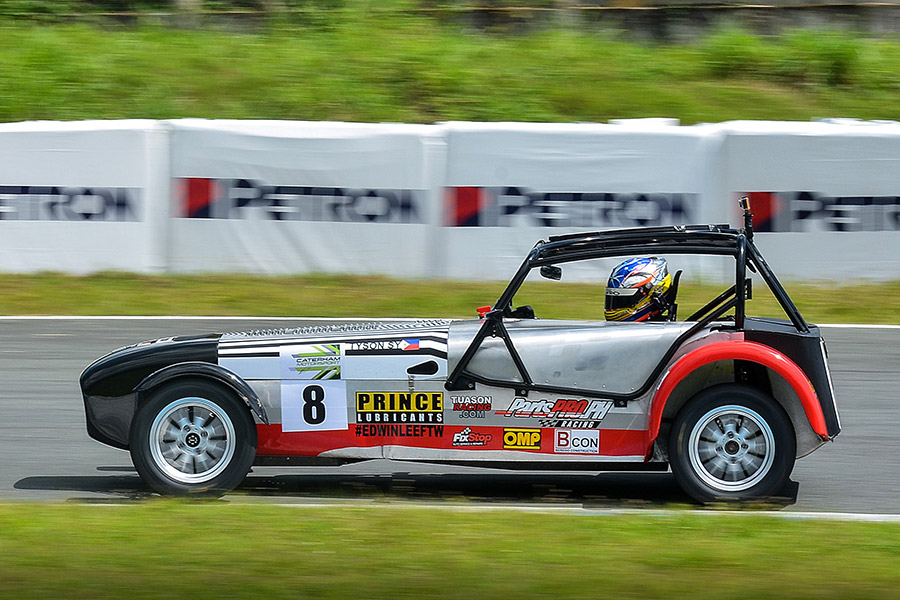 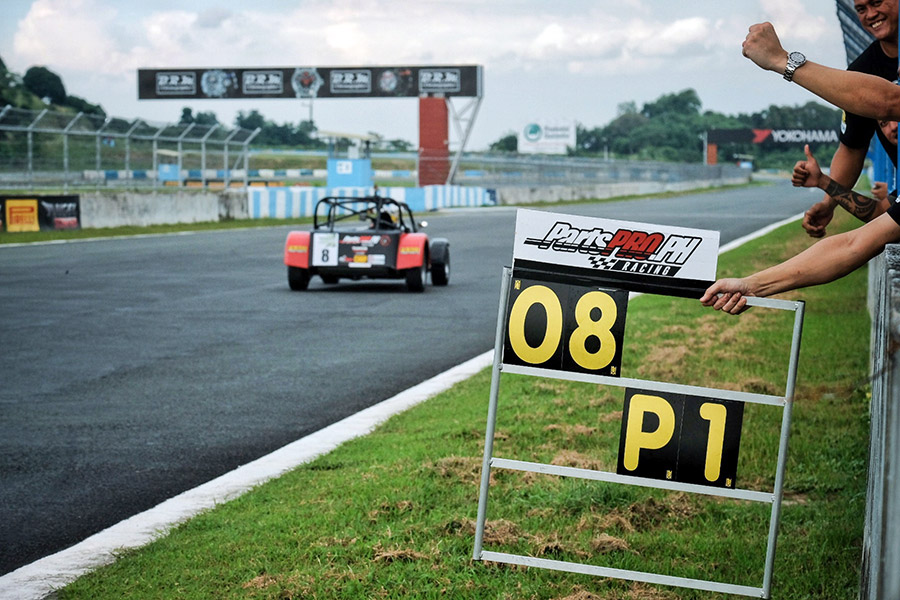 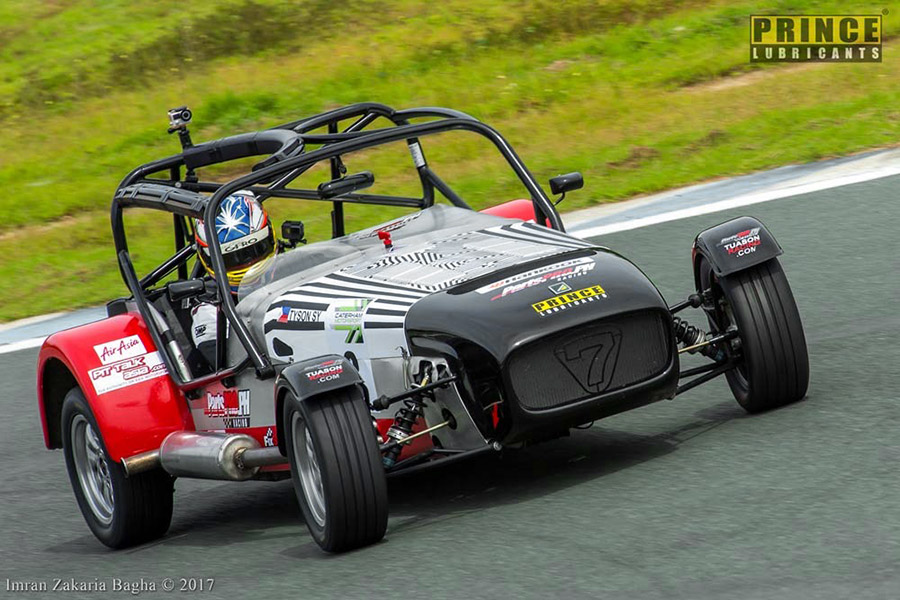 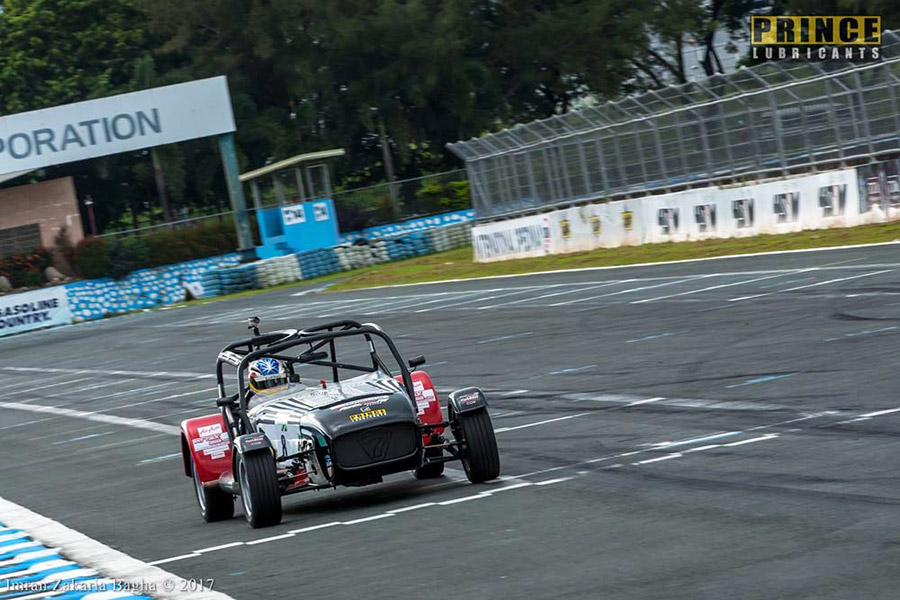 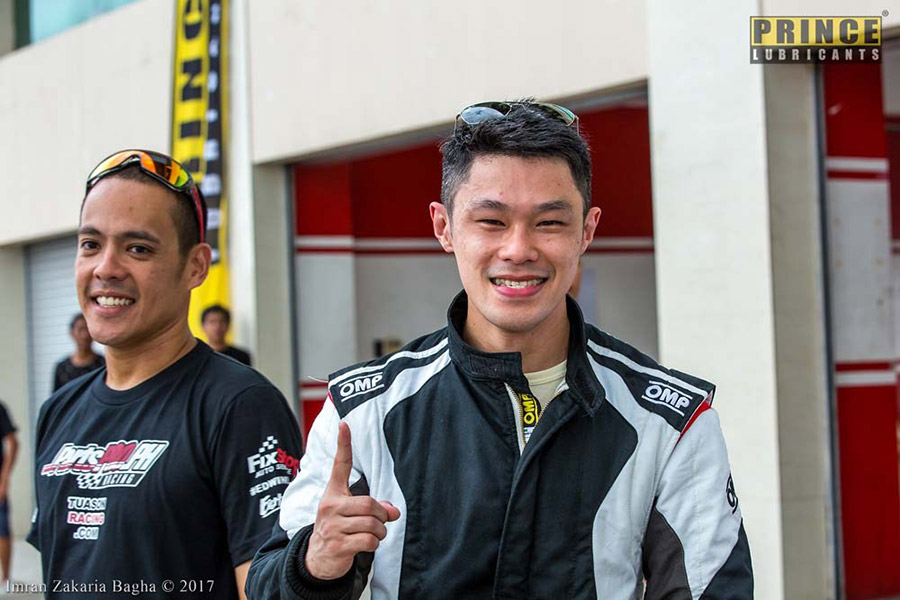 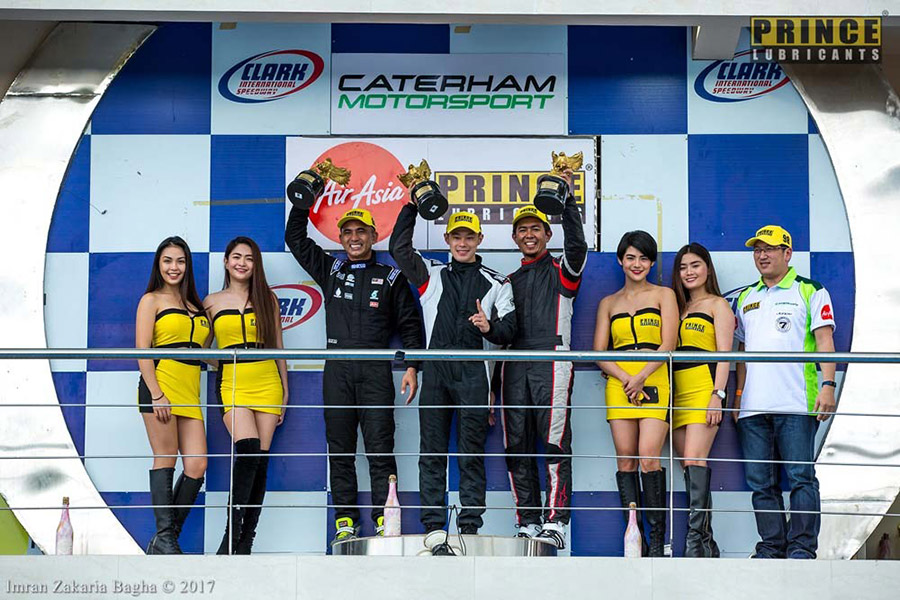