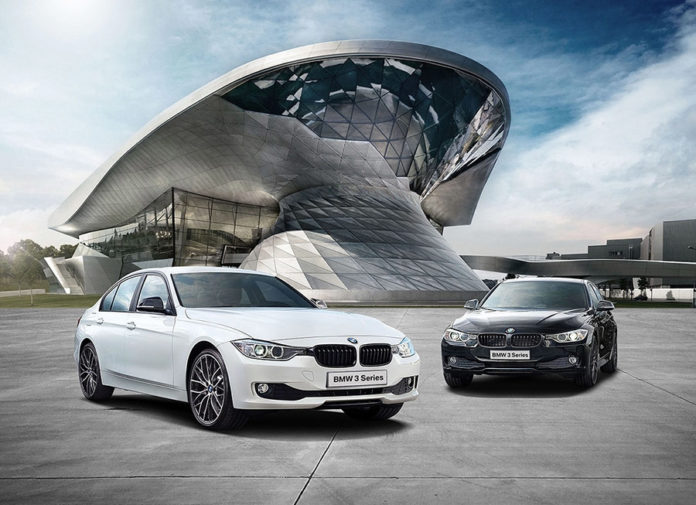 In 1975, BMW gave the world the 3 Series at the International Motor Show (IAA) in Frankfurt, Germany. 6 generations later, it’s now their best-selling model in history. So to celebrate its 40th birthday, they’ve come up with a fitting tribute – the 3 Series Anniversary Edition.

Based on a standard 318d, the ‘Anniversary Edition’ gets some unique features that sets it apart from the rest of 3 Series family. More specifically, “it presents a more agile and powerful appearance” according to the official press release from BMW. And they did it by fitting this 3 Series with a Black Gloss Kidney Grill, Carbon Fiber Side Mirror Caps, an M Performance Rear Spoiler, an a set of 18 inch M Performance Alloy Wheels.

Since it’s a 318d, you’ll find the same 2.0L 4-cylinder TwinPower Turbo diesel engine under that long hood and same 143 hp and 320 Nm of torque. If that doesn’t sound like much, well it’s said that it can go from 0 to 100 km/h under 9.0 seconds with the help from BMW’s award-winning 8-speed automatic transmission with Steptronic.

Altogether, the 3 Series Anniversary Edition “represents an expression of joy in sporty handling, enthusiasm for innovative technology, and appreciation of premium quality.” And you can get one for a tag price of P3.19-million from Asian Carmarkers Corporation (ACC), BMW’s official importer and distributor in the Philippines. But do keep in mind that only 30 units will ever be sold here.

Inquire, book a test drive, or buy the BMW 3 Series through AutoDeal.com.ph.