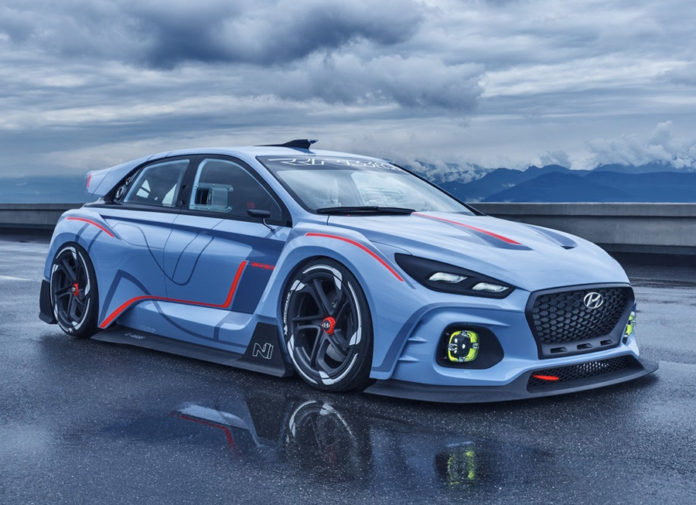 Now that their WRC program is running in full swing, Hyundai Motorsports thought that it would be nice to have a change in scenery away from the usual rally stages. Possibly somewhere cleaner, somewhere more civilized like a race circuit. So, they’ve decided to get their feet wet in touring cars by building their own machine for the TCR Series.

Their candidate for TCR is based on an i30 (also known as the Elantra GT) which was launched last year. They’ve been busy developing it for race duty since September of 2016, handled by their Customer Racing Department at the Hyundai Motorsports HQ in Alzenau, Germany.

Unlike the WTCC and WRC, TCR-spec machines are not that far off from their road-going counterparts. The transformation mainly involves removing the interior bits then adding a roll cage, safety seat, dampers, and black sticky slicks. It’s also supposed to have wider wheel arches, a big front splitter, and a huge rear wing.

As for what’s under the hood, the production versions’ 1.4L T-GDI engine was replaced with a larger 2.0L turbocharged unit borrowed from Hyundai’s vehicle line up. They then tuned it to produce somewhere around 300 hp, double than what the stock i30 had. The state-of-the-art 7-speed dual-clutch transmission was also chucked out in favor of a 6-speed gearbox that’s more suited for racing duty.

Hyundai Motorsport’s new i30 TCR will definitely be a beast when it hits the track. Testing will begin sometime in April or May while the first customer deliveries should arrive by December in time for the 2018 season. But what will it look like?

Well, here’s the thing. There are still no photos of the i30 TCR, whether official or not, so we have to wait a few more months for that. We, however, imagine it’ll look something like their RN30 Concept with even bigger aero.