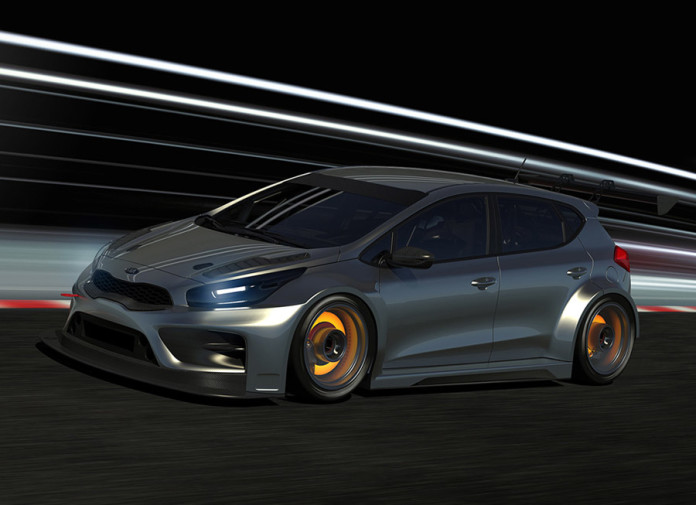 In all honestly, we find it weird how Kia is more preoccupied with sports such as tennis and soccer rather than an activity that involves the products they sell. Well, now they do and it’s in touring cars, taking on the TCR Series with the Cee’d.

Expected to make its competitive debut this year, the Cee’d TCR is is based on Kia’s road-going 5-door compact which we better know as the Forte. It has been stripped out, fitted with a multi-adjustable suspension, and re-sculpted with an aero-package more suited for motorsports. That explains the front splitter, enlarged wheel arches, and huge wing that hangs out the back. Of course, it also has all the FIA safety bits such as a full cage, racing seat, and harness.

What makes it really unique though is what lies under the hood. Keeping its FWD layout, there’s a new 2.0L turbocharged engine that’s capable of pushing out 330 hp – more than double what it had stock. There’s also a proper sequential paddleshift gearbox instead of the 6-speed slushbox Kia offers in showrooms.

It’s developed by STARD (Stohl Advanced Research and Development) of Austria, which are the same people behind the Kia K3S that competes in the China Touring Car Championship (CTCC). They will also be responsible for the production and customer support of all teams running the Cee’d TCR.

While Kia commissioned the project, sadly they won’t have any factory effort in the series. Instead, it will be built and sold to teams who will race it in regional TCR championships, European Touring Car Cup (ETCC), and even the Nürburgring 24 Hours. When it does, it’ll go up against the likes of the Ford Focus, Honda Civic, SEAT Leon, and VW Golf GTI.