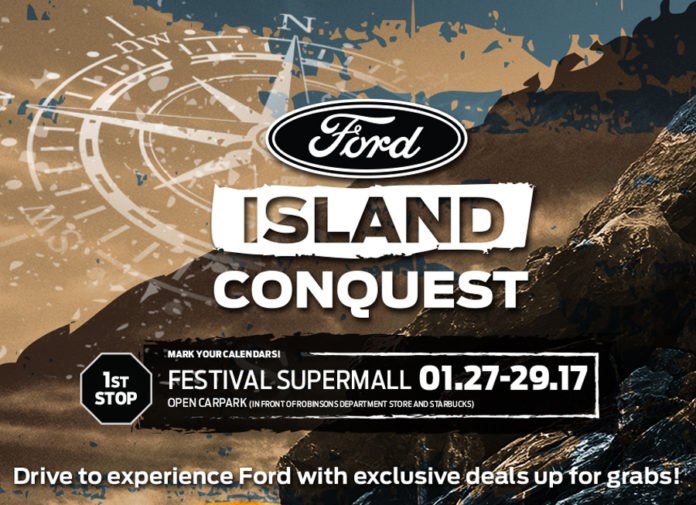 Drop by the Festival Supermall in Alabang this weekend and you’ll be able to go on the “ultimate test drive” in an EcoSport, Everest, and Ranger. Ford Philippines calls this event the ‘Ford Island Conquest’ and looks like it’s going to be BIG.

The “1st STOP” will be staged at the mall’s open carpark (in front of the Department Store and Starbucks) from January 27 to 29. It’s also said to have an “all-in-one custom arena” where customers can go test drive a Ford.

On the menu are the EcoSport, Everest, and Ranger. If Ford is going to highlight each model’s best features, as based on the press release, visitors should then be able to put the claimed ground clearances and water-wading depths through the ultimate test. Specifically, the EcoSport should be able to clear any obstacles below 200 mm and pools as deep as 550 mm. The Everest can do even better with 225 mm of ground clearance and a 800 mm water-wading depth, while the Ranger takes it a notch higher at 237 mm and 800 mm, respectively.

Ford Philippines won’t confirm that just yet. The EcoSport, Everest, and Ranger also does have other selling points such as fuel economy, practicality, smart technologies, and passenger comfort – all of which can be experienced without going on the rough stuff.

But that’s not what piqued our interest. What did, however, was why the event was branded as an “Island Conquest” and that this weekend will be its “1st STOP”.

There are 7,107 islands in the Philippines (give or take a few whether it’s high tide or low tide). Although we don’t think they’ll make a stop on each one, there will definitely be more Ford Island Conquest events in the not so distant future. And maybe, just maybe, something special will happen if you go to every single one.