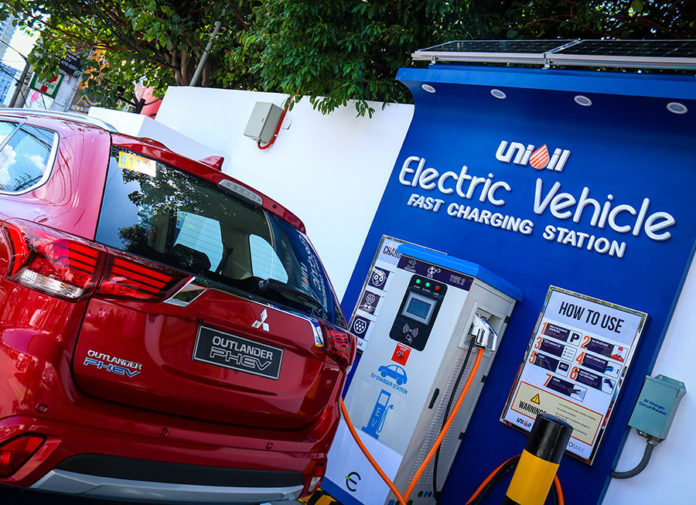 Unioil Petroleum Philippines Inc., or Unioil for short, is more than just a fuel company these days. They’ve delved into the Electric Vehicle (EV) charging business late late year by putting up their very first station at Unioil Congressional Ave. Now, they have a second one in Makati and is currently available to use for FREE.

“This EV charging station is equipped with the latest Chademo fast charging protocol compatible with most Japanese, US and European cars,” said Unioil President Kenneth C. Pundanera. “We want to encourage more people to begin considering the use of electric powered vehicles. We want to make available the infrastructure needed to pave the way for much cleaner forms of transportation. This is consistent with Unioil’s advocacy to find ways in Doing our Part for a cleaner environment.”

Located at Unioil EDSA Guadalupe Northbound, the said EV charging station has several different plugs to suit a variety of vehicles. It’s also free to use for now, until the time comes that more people drive EVs here in the Philippines.

Although we’re still eons behind in terms of consumer EV acceptance, Unioil has an ally in the public sector who goes by the name Senator Sherwin T. Gatchalian. He happens to the be the Chairman of the Senate Committees on Energy and Economic Affairs.

He said: “It is expected that by 2040, 55% of all new car sales will be electric. However, one recognized challenge to EV growth is its charging infrastructure.

“As such, I commend Unioil for taking the initiative to spur EV development in the country through the construction of charging stations.”

Hopefully with his help, consumers can get their hands on more affordable EVs from local distributors in the not so distant future. One such example is Mitsubishi Motors Philippines Corp. (MMPC) who brought their Outlander PHEV during Unioil’s launch event.

Honestly, we thought that this was merely PR stunt at first. Because why would a petroleum company invest in technology that will put them out of business? But apparently, there’s a solid plan behind it and they’re not alone. British oil giant BP recently acquired Chargemaster, which is the biggest electric vehicle charging company in the UK with over 6,500 charge points. Royal Dutch Shell was at it even earlier, who bought NewMotion in 2017 including its 30,000 electric charge stations in Europe.

We could only guess that Unioil is banking that their investment will cash in when the Philippines shifts to EV technology. And when it happens, they might just become the largest EV charging company in the country.