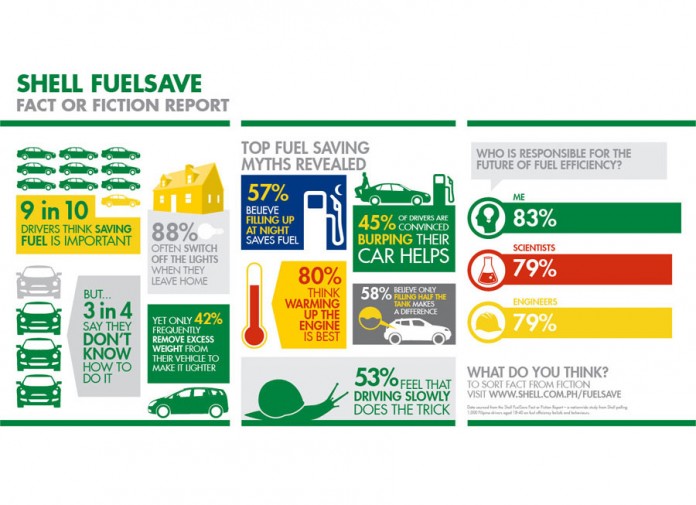 What these genuine good guys did was to collect the most common fuel saving myths out there and explain why they’re pure baloney. In case you have doubts, do keep in mind that they’re the real experts in the field. After all, Royal Dutch Shell is the 2nd largest oil company in the world. So if there’s anyone who should know the ins and outs of fuel saving, it’s them.

To help sort fact from fiction, here are the Top 6 Fuel Saving Myths with Tips from Shell FuelSave to turn you into a pro.

MYTH #1: Warming up the engine before driving
The best efficiency will be achieved using a fully warmed up engine. However, engines do not need to be ‘warmed up’ to drive, even in cold temperatures or at night. You burn more fuel idling and waiting than just getting in the car and driving. The engine will warm up much more effectively, reaching ideal operating conditions more quickly whilst being driven.

MYTH #2: Driving slowly all the time
Vehicle efficiency increases with increasing speed, but only up to a point. Beyond the optimal speed for the vehicle, the fuel efficiency will drop off rapidly with increasing speed due to increased drag. The most efficient speed for a vehicle will depend on many parameters including engine size and power, and vehicle size and design. Therefore it is not automatically more efficient to drive slowly if the vehicle is operating below its optimum efficiency.

MYTH #4: Moving gears up and down frequently to save fuel
Using the wrong gear for the speed you are traveling burns more fuel. The higher gear you drive in, the lower your engine speed is, which can improve fuel efficiency. So change up a gear whenever you can, without laboring the engine. Change gear in good time when you pull away or when you’re accelerating.

MYTH #5: Filling up to half a tank or less to avoid excess evaporation
Carrying extra weight negatively impacts fuel efficiency. However, it would be less efficient to make several specific trips to the fuel station, filling with a small volume each time, than to stop once, ideally as part of a regular trip elsewhere, and fill the tank up.

Fuel systems in modern vehicles are also designed with vapor recovery systems to prevent the loss of evaporated fuel in the tank.

MYTH #6: Filling up at night when it’s cooler
Although liquids do expand and contract as they heat up and cool down, fuel at gas stations is stored underground in bulk. Therefore the impact of temperature fluctuations during the course of the day has a minimal impact on the volume of the fuel.