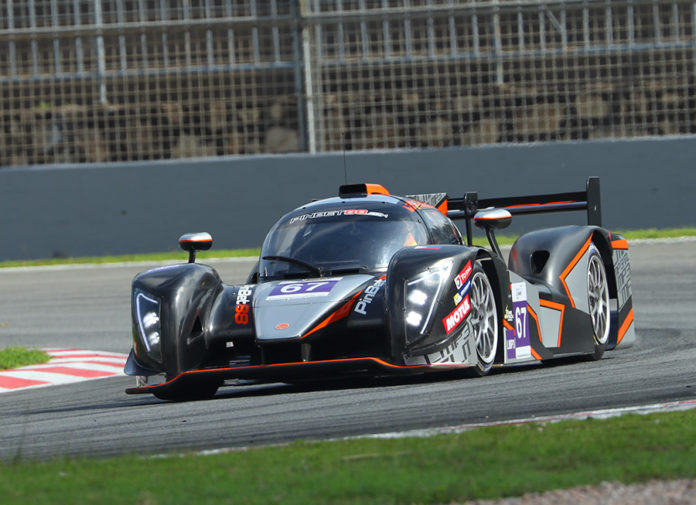 Even if you have one of the fastest cars on the grid and arguably the most capable driver lineup to match, sometimes it’s just not your day. We’re talking about Pinnacle Racing Team (PRT Racing) who sadly failed to finished the 4 Hours of Zhuhai.

It was the 2016/2017 Asian Le Mans Endurance Series’ season opener. There were at total of 30 entries that weekend, 9 of those in LMP3, and 3 were Ginettas including the team’s No. 67 Pinbet88-sponsored machine. Sharing driving duties were Ate De Jong, Charlie Robertson, and Martin Rump who quickly proved to be one of the top runners in LMP3. Case in point, Charlie’s qualifying time would allow PRT Racing to start Sunday’s race P3 in class.

That privilege went to Martin who got off to a good start and began picking his way through the field. The Estonian driver was also setting good lap times and if he could keep this up, the team had a solid chance at a podium finish. Then it happened. A slower GT car somehow hit Martin from behind and sent him to the gravel. Although he managed to rejoin the race, the team would lose several positions and drop down to P8.

Undeterred, PRT Racing resumed the fight now with Charlie behind the wheel. The Ginetta factory driver did an amazing job to reel in the leaders during his stint before handing the car over to Ate at the race’s halfway point.

Ate continued the hunt and his consistent performance allowed them to gain several positions, moving up to P6 with 1 hour to go. Then it happened again. While trying to pass a slower vehicle, let’s just say things didn’t go as planned and Ate ended up in the gravel. He was pulled out, limped back to the pit, but the team eventually decided to retire the Ginetta LMP3 with 40 minutes left in the race.

If losing sucks, a DNF sucks even more. But that’s racing. And despite their retirement, PRT Racing’s performance over the weekend proved that they CAN challenge for podium finishes or even a win. That’s exactly what they’re aiming for at the Asian Le Mans Endurance Series’ next stop at the 4 Hours of Fuji in Japan on December 3/4.

Ate De Jong, PRT Racing Owner and Driver: “We just had some back luck. That’s all. Martin, Charlie, and the whole team did a tremendous job in Zhuhai. We were quick all weekend, qualified P3 in LMP3, and had good pace during the race despite the incidents. Although I’m disappointed not to finish the race, I’m still very pleased to see what we are capable of. We know we can be on the podium and we will come back stronger in Fuji.”

Charlie Robertson, PRT Racing Driver: “It was a weekend filled with ups and downs. Qualifying in P3 on Saturday gave us a lot confidence for the race. Martin did a great job during his stint. Ate drove also drove really well and was putting on quick times lap after lap. However, it just wasn’t our day. We deserved so much more, but that’s racing. We will bounce back at Fuji.”

Martin Rump, PRT Racing Driver: “Mixed feelings from my first LMP3 race. I had a good start and was fighting through the pack. Unfortunately I spun after another car unexpectedly hit us. Still we pushed for a good position but we had to retire later in the race. Even if we didn’t finish, I’m happy with the effort from the team. It’s an absolute pleasure working with PRT Racing, when I know how determined each member is.”