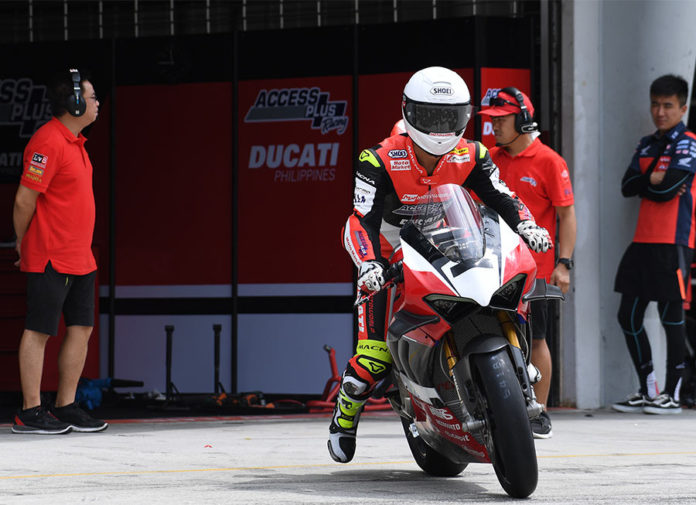 Following the team’s Asia Superbike 1000 (ASB1000) debut at the Sepang International Circuit, Access Plus Racing-Ducati Philippines-Essenza is now taking the fight to The Bend Motorsport Park in Australia in a week’s time. There Timothy Joseph “TJ” Alberto and Jonathan Serrapica will resume their campaign in the Asia Road Racing Championship’s (ARRC) second event and once again fly the colors of Ducati.

The brand new circuit is located 100 km south-east of Adelaide and only opened last year. Thus, no other ARRC team or driver has ever raced on the 4.9 km circuit before giving everyone an equal opportunity.

Obviously, the Philippine-based team isn’t taking any chances and has been hard at work since the last event in Malaysia. It’s also understood that some work has been done on their Ducati Panigale V4Rs. But most of the effort went into understanding the brand new machine, which the squad only got their hands on a week before the season opener in March.

During their last outing, Alberto scored an impressive 6th and 7th while his teammate Serrapica picked up a point-scoring 8th place finish in tricky conditions. Access Plus Racing-Ducati Philippines-Essenza will be aiming to improve on these results in Australia.

The ARRC race weekend begins on April 25 and run until April 28. Qualifying will take place on Friday afternoon, followed by a 12-lap Race 1 on Saturday at 12:20 PM local time, and another 12-lap Race 2 on Sunday.

TJ Alberto, #77 Ducati: “We’ve made improvements to our Ducati Panigale V4Rs for the next race to help us improve our performance in Australia. It’s a new track that the teams and riders have not tested on before, so we should all be on equal ground and would make for an interesting race. Being 6th overall in the championship is good, but moving up in the standings is our main goal.”

Jonathan Serrapica #48 Ducati: “Many improvements to the bike will be finished by the time we reach Australia and I’m confident to get some additional help from these updates. I learned a lot about the bike and the team during my first race weekend, but Australia is new for all of us so it’s hard to predict what will happen. My focus right now is to be able to fight for position and finish strong in both races.”

Toti Alberto, Team Principal: “With our experience from Sepang and more preparation for the team, we believe we can now bring the fight to the frontrunners in Australia. It’ll also be everyone’s first time to race at The Bend so the entire field will be on an equal playing field. Looking forward to do better for Access Plus Racing-Ducati Philippines-Essenza with TJ and Jonathan.”