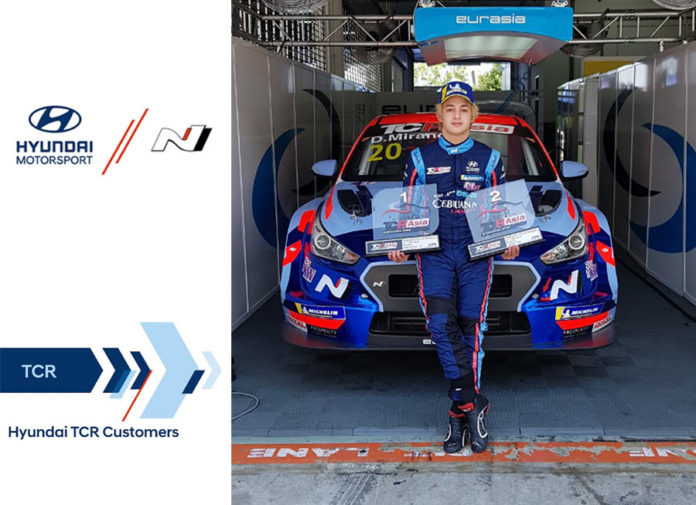 It surely didn’t take long for Hyundai Motorsport to find its first batch of Customer Racing Junior Drivers. A month after launching the new program, they’ve now revealed the 5 drivers who they’ll take under their wing this year which includes our very own Daniel Miranda from the Philippines.

This is Miranda’s first year racing in TCR Asia Series. Yet, he was able to immediately show his potential on only his first event. We guess his 2nd place finish at the Sepang International Circuit a few weeks ago was enough to convince Hyundai Motorsport’s Customer Racing Department to give him a spot and is the only driver from Asia on the list. Hence, the 22-year-old will carry the official Junior Driver logo on his race overalls for the remainder of his 2019 TCR Asia Series campaign with Eurasia Motorsport.

As a Hyundai Motorsport Customer Racing Junior Driver, the young Cebuano will also receive support from the department on and off the race track. He will draw from the expertise of other Hyundai customer drivers racing in the FIA WTCR and be given extra training and media coaching to help him further his racing career.

The end goal is to develop Miranda towards a spot in the FIA WTCR with Hyundai teams.

Backed by Cebuana Lhuillier, Miranda began his motorsports career in go karts and was awarded as the Karter of the Year at the 2013 Golden Wheel Awards. He then became the Toyota Vios Cup Champion in 2017 before moving up to single seaters in 2018. The young driver would score a podium on his Asian Formula Renault (AFR) debut season and missed out on the Formula V1 title by a single point.

He joins siblings Andreas and Jessica Bäckman from Sweden, Luca Engstler from Germany, and Daniel Nagy from Hyungary as a Hyundai Motorsport Customer Racing Junior Driver.

Daniel Miranda: “Very thankful for Hyundai Motorsport to choose me to be their Junior Driver in only my first season in TCR. Our goal is to continue on improving our performance and results, and fight for the championship throughout the year.”