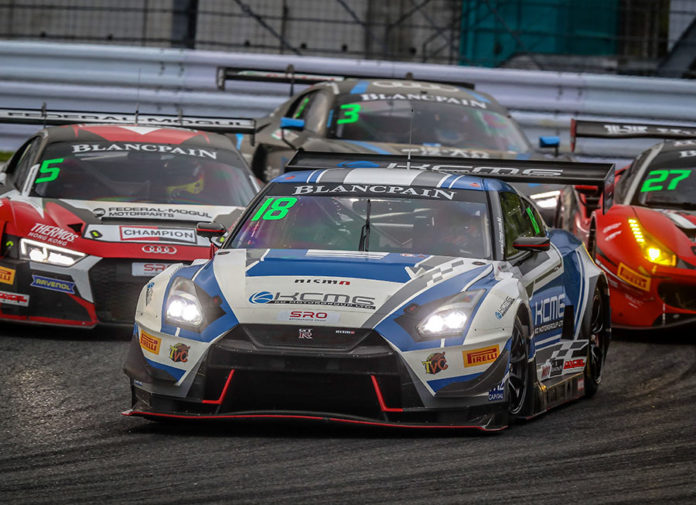 Godzilla has quite a legacy on Mount Panorama. The R32 Skyline GT-R made history by winning the Bathurst 1000 way back in ’91 and ’92 before it was banned for being too quick. Then exactly 23 years later, it won again this time with an R35 GT-R taking 1st place in the Bathurst 12 Hour race. This puts a lot of pressure on KC Motorgroup Ltd. (KCMG) as they aim to add to Godzilla’s tally of wins on the mountain as it fields a pair of Nissan GT-R NISMO GT3s this weekend.

Of the 43 starters, they’re the only team who’ll be running Nissan GT-Rs and will be up against 26 other GT3 cars in class.

Car #18 will be driven by Oliver Jarvis, Alexandre Imperatori, and Edoardo Liberati. British driver Jarvis returns to the 6.213 km circuit after scoring a podium finish in the Bathurst 12 Hour last year. He’s joined by Imperatori from Switzerland who’s also making second Bathurst appearance, while Liberati from Italy will be on his maiden outing.

The sister #35 Nissan GT-R will be shared by Katsumasa Chiyo, Tsugio Matsuda, and Josh Burdon. Chiyo-san became an overnight star after winning the 2015 race, passing 2 cars on the penultimate lap to claim Nissan first Bathurst 12 Hour win. With him are fellow Japanese driver and 2-time Super GT Champion Matsuda and local hero Josh Burdon who are both making their debut on the mountain.

The Liqui Moly Bathurst 12 Hours acts as the first round of the 2019 Intercontinental GT Challenge where KCMG plans to contest all 5 events in their pair of Nissan GT-R NISMO GT3 cars. Practice is scheduled to take place on Friday (February 1) followed by Qualifying on Saturday before the race gets the green light at 5:45 AM on Sunday.

Ian Geekie, Team Manager of KCMG: “We learned a lot in the Dubai 24H, which was challenging for the team and cars. The next hurdle was to get everything to Australia in a very short time, and also to fly the crew here to prepare the cars. The cars have been completely dismantled and all components checked, rebuilt or replaced. Lessons learnt from Dubai have been incorporated, which should improve reliability and performance. Due to the constraints of the cars’ homologation and the Balance of Performance it is not possible to make major changes, however we are continually refining and developing the whole package and are confident we can provide our drivers with a competitive car to take on the challenge of the Mountain.”

Dr. Paul Ip, KCMG Founder: “We are really looking forward to competing at the iconic Mount Panorama circuit for the first time in the 2019 Liqui-Moly Bathurst 12 Hour. It will for sure be a tough challenge but we have a great team and drivers and look forward to competing against some of the world’s top teams and drivers at this world-class event. KCMG is proud to continue its successful partnership with Nissan NISMO and look forward to seeing the mighty Nissan GT-R NISMO GT3 conquer the Mountain.”