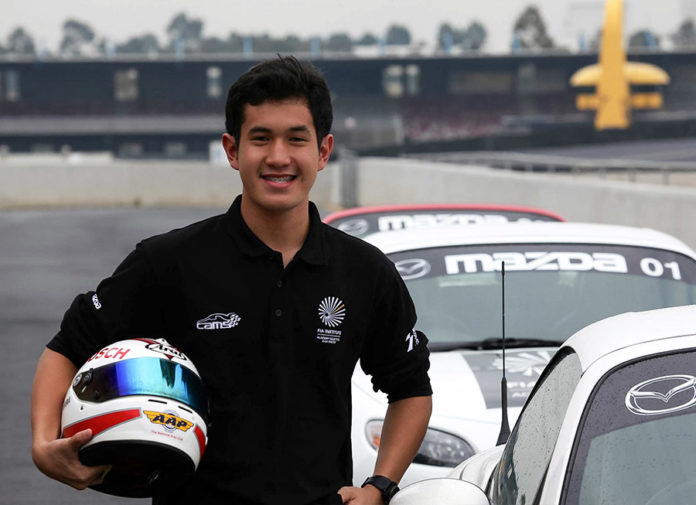 It has come to our attention that one of our countrymen, Milo Rivera, is taking his first steps to move up to single seaters. Graduating from go karts, touring cars, and slalom racing, the young 21-year-old is scheduled to test in Italian Formula 4 later this month with DieGi Motorsport.

Milo was first scouted by DieGi’s sister team Jenzer Motorsport last year. His stints in the 2013/2014 FIA Young Driver Excellence Academy and successes in international karting could have played a vital role in getting their attention. And after some negotiations, he was finally given the chance to test and possibly race for them in 2016.

But since Jenzer’s driver line-up is already full for this season, he’ll be managed by DieGi Motorsport for now.

The test will be held at the Adria International Raceway in Italy, on the 19th and 20th of May. Since this will be his first time to drive in Formula 4, Milo will use the chance to familiarize himself with the new machine and get up to speed.

Milo revealed to us that, while he already has a reserved seat in the 2016 Italian Formula 4 Championship, it’s still not certain if he’ll compete this year. They’re still securing the budget and sponsors for him to join the season. But if things go as planned, Milo will be able to race under the Philippine flag on circuits such as Imola, Mugello, and Monza. He’ll race with DieGi Motorsports and be trained under the Jenzer Motorsport program.

Milo Rivera: “Given my motorsports objective, I believe that Formula 4 is a good series for me to initially make a career in the open wheel platform. The cars are very fun to drive and competition at the European Formula 4 level now is very good. With Formula 1 just 3 steps away, it’s the closest thing I could get to reach my goal as quickly as I can.

“I believe that this would be a big step, not just for me, but for the whole of Philippine motorsports. I personally know that we have the talent and dedication to compete and be very successful at an international level. Not only do I aim to take a huge step towards the F1 dream, I also aim to open the doors even wider for Filipinos to make it to the big leagues.”

Milo is already seasoned driver despite his age. Starting his career when he was only 12 years old, some of his achievements now include the 2012 Philippine International Karter of the Year, 2014 and 2015 National Slalom Series Drivers’ Champion, and 2015 Golden Wheel Awards’ Driver of the Year. With his jump to Formula 4, we hope to see him add more silverware to his growing trophy cabinet.