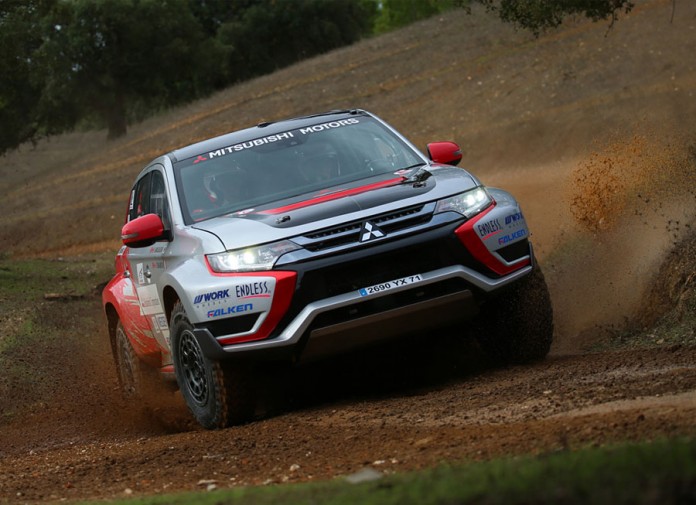 This year, Mitsubishi Motors Corporation (MMC) is coming back from its 4 year absence from cross country rallies. But instead of the ultra-successful Pajero, they’re doing it in a twin-motor 4WD Outlander PHEV.

The hybrid electric 4WD Outlander PHEV will be entered in the 29th edition of the Baja Portalegre 500, which is a 500 km cross country rally based around the city of Portalegre in Portugal. MMC looks to take full advantage of the event to test out their rally machine that’s based on the production model. The Outlander PHEV is fitted with a roll cage, a modified Super All-Wheel Control (S-AWC) system to deliver higher output, and a modified generator and engine to boost overall system performance. All this should help the machine take on a course composed mainly of dirt roads that’s known to be used as a warm up for the upcoming Dakar Rally.

Speaking of Dakar Rally, back-to-back Dakar Rally winner (2002 and 2003) Hiroshi Masuoka will be at the driver’s seat of the Outlander PHEV. Masuoka, who was assigned the role of team captain, will also spearhead a group heavily populated by MMC personnel which include team manager and technical director Yasuo Tanaka. Tanaka is an engineering expert from the EV Component Research Department and will be supported by 4 other engineers from his department.

The Baja Portalegre 500 will be held from October 22 to 24, 2015 at the Portalegre municipality in the eastern part of Portugal.

With Mitsubishi’s re-emergence in cross country rally, could this be a sign that MMC will eventually throw its hat back in the Dakar Rally? Or is this just a marketing exercise to promote the development of the EV and 4WD technologies?

Whatever the case may be, we’re just happy to see them back.