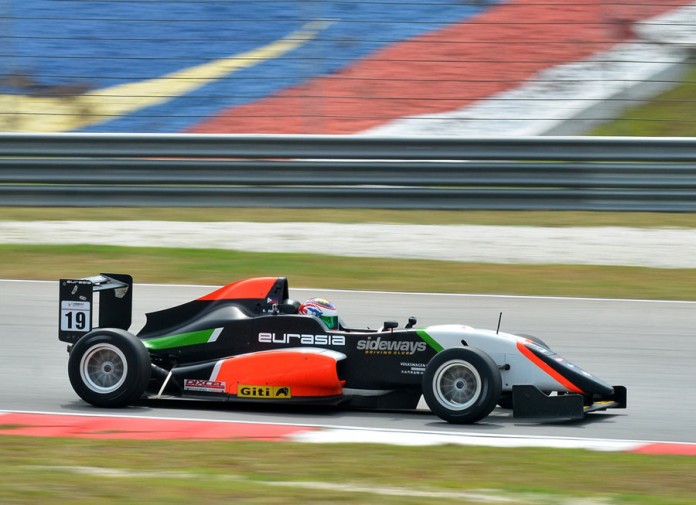 At only 15 years of age, Sean “Rockrapidz” Smith became the first ever Filipino to test in Formula Masters China Series (FMCS), driving for Eurasia Motorsport last February 10 to 11, 2015 at the Sepang International Circuit in Malaysia.

Born to a British father and Filipino-Chinese mother, this was Smith’s first outing in a single seater after graduating from 2 years of go kart racing. Although he did struggle with clutch problems during the first session, the young driver was eventually able to go out on track and record some impressive laps throughout the entire FMCS pre-season test.

Smith remarked that the Volkswagen-powered Tatuus FA010 used in FMCS “required minimal setup” and relied more on driver skill, rather than technical know-how, to perform well. This gives rookies like him an opportunity to be competitive in the series despite the lack of experience in single seaters.

During his first FMCS outing, Smith was coached by KCMG LMP2 driver Richard Bradley who commended the British-Filipino driver’s talent and potential. He was also looked after by Eurasia Motorsport Team Principal Mark Goddard – a man who was at one time responsible for developing young drivers such as current Red Bull Racing Formula 1 driver Daniel Ricciardo and Filipino-Swiss GP2 driver Marlon Stockinger.

Unfortunately, Smith will not be racing in FMCS this year and will require more practice sessions before he is ready to make the big switch. Instead, he plans to compete in the Toyota Vios Cup and continue his karting career in 2015.

We’re hoping that, with enough support from sponsors and ample seat time, Sean “Rockrapidz” Smith can be the first Filipino to race in the Formula Masters China Series in a few years time.

Sean “Rockrapidz” Smith: “Testing a Formula car is a privilege, particularly on a Formula 1 circuit. There are so many things to learn from this track, and to be able to experience where the top drivers of the world race is overwhelming. It makes me feel like I’m getting closer to my dream.”

Mark Goddard, Eurasia Motorsport Team Principal: “Sean Smith demonstrated that he has the potential to go a long way in motorsport over his two days of testing. He had to learn the circuit and drive a Formula car for the first time whilst coping with other more experienced drivers on the circuit. He ended the test by posting an extremely fast lap time for a novice making a great impression on all those in the pit lane.”