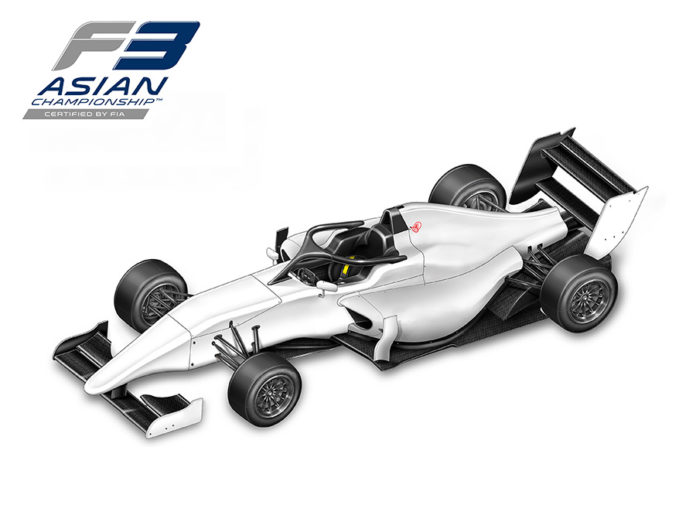 The Fédération International de l’Automobile (FIA) has created a motorsport ladder to develop drivers into future world champions. Its first step is Formula 4, where we have F4 China and F4 SEA in the region. Then you move up to the F3 International Championship that’ll debut in 2019, followed by F2, and ultimately in F1. But to bridge the gap between F4 and international F3, the FIA has added a regional F3 ‘step’ as a feeder series. And this 2018, we’ll have our own called the F3 Asian Championship.

Mind you, this is not where related to the Asian F3 Championship that ran in the early 2000s. It’s a new single chassis, single engine concept that complies with the latest FIA specifications. While the suppliers have yet to be revealed, F3 Asia will run a single-make 270 hp turbocharged engine, 6-speed paddle shift gear box, and feature a Halo device and improved side impact protection.

The F3 Asia Championship will be organized by Top Speed who are the same people behind the Asian Le Mans Series, Ferrari Challenge Asia Pacific, Lamborghini Super Trofeo Asia, Audi R8 LMS Cup, and Formula Masters Series. Their 2018 calendar will have 5 events, with 3 races each, that sums up to 15 races in total. Stops include the Sepang International Circuit in Malaysia, Shanghai International Circuit in China, and the newly-built Ningbo International Speedway.

What’s great about the new series is that the champion gets to earn FIA Super License points. They’ll also award an AM Class and Team Championship at the end of the year.

Davide De Gobbi, Top Speed General Manager: “We are proud to open the new era for global Formula 3 with the F3 Asian Championship Certified by FIA this year. It marks a coming of age for Asian motorsport, and opens up a world of opportunities for our regional drivers as well as those around the world seeking the ideal development environment run in the world’s economic powerhouse.”

Charlie Whiting, FIA Director of Single-Seater Championships: “The addition of another regional FIA Formula 3 championship will be a hugely positive step in the development of the category around the world. Junior motor sport has been growing rapidly in Asia in recent years, with highly competitive FIA Formula 4 series in China, Japan, and South East Asia giving young drivers a better opportunity than ever before to advance their skills and move up to the next level. Now with the F3 Asian Championship Certified by FIA, these drivers will have a great place to compete at a regional level.”