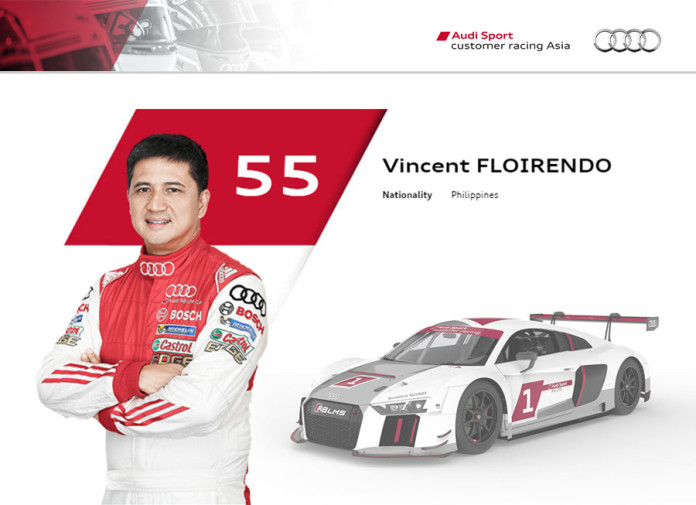 If the name sounds familiar, that’s because Vincent ‘Enteng’ Floirendo is the same guy who raced the Philippine flag in the Ferrari Challenge Asia Pacific 2 years ago. Back then, he managed to wrestle a 458 Evoluzione for a full season to end up 3rd in the driver’s championship.

Not bad for a rookie.

But after a 1-year break, the businessman from Davao is itching to get back behind the wheel. This time, he’s making the big jump to Audi as he competes in the 2016 R8 LMS Cup.

We got word of Vincent’s plan with help from the Manila Sports Car Club (MSCC), which we confirmed with him personally soon after. There’s also no point keeping it a secret as his driver profile is now posted on Audi Motorsport Asia’s website for the world to see.

Vincent, however, is still mum on details as he has yet to finalize plans for the season. What we do know is that the 2-time Philippine GT champion had a stint with the ‘old’ R8 LMS Cup car at last year’s 6 Hours of Fuji. Running under Team Chengdu New Elements, he managed a respectable 16th and 13th place finish on his first outing.

Yes, he did buy his own brand new Audi R8 LMS – one which packs a 585 hp 5.2L V10. The latest-spec R8 LMS also comes with a sequential 6-speed racing gearbox, paddle shifts, a limited-slip diff, with power being sent to the rear wheels. And because it meets FIA GT3 regulations, Vincent will also enter the same machine in the Asian Le Mans Series (AsLMS).

With a full season ahead, expect to see the Philippine flag race in the R8 LMS Cup’s 12-race calendar that runs from May ’til November, visiting countries such as China, Thailand, Malaysia, South Korea, and Taiwan.