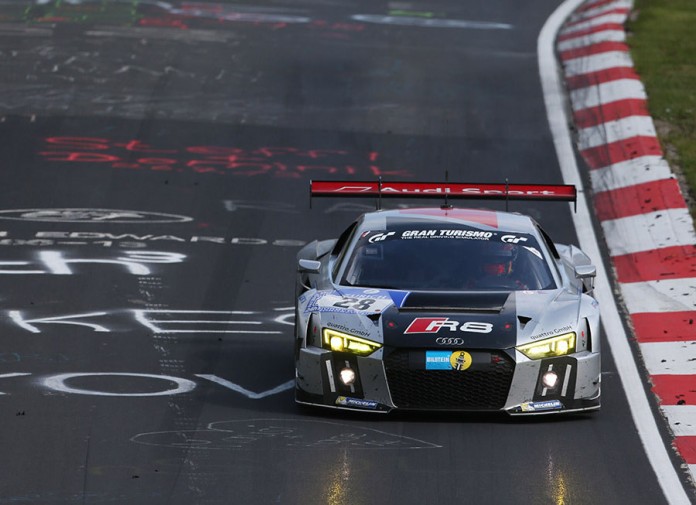 In just 10 weeks after its debut at the Geneva Motor Show, the new Audi R8 LMS has already won the 2015 Nürburgring 24 Hour race last May 16/17. This marks the R8’s 3rd victory at the famed Nordschleife in 4 attempts.

Audi entered 4 brand new LMS-spec R8s in the SP9 GT3 class. The new machine runs on a 5.2L V10 with 585 hp (same as production), is 25 kg lighter than the old car yet 39% stiffer, and has a new aerodynamic concept that includes a fully lined underfloor and integrated diffuser. All this has been achieved while having about 50% of the R8 LMS being based on the road-going model. It’s also one of the first cars to meet the new 2016 GT3 regulations.

The No. 1 car of Audi Sport Team Phoenix was driven by last year’s winners Christopher Haase, Christian Mamerow, René Rast, and Markus Winkelhock. Unfortunately for them, an accident while Mamerow was behind the wheel forced them to retire after leading the race.

Likewise, the No. 4 machine driven by Mike Rockenfeller failed to finish when the German driver spun on an oil spill and was hit by another car that was trailing behind.

Belgian Audi Club Team WRT’s No. 29 R8 LMS, on the other hand, managed to see the chequered flag in 7th place. But that was after Pierre Kaffer and his teammates Christer Jöns, Nicki Thiim, and Laurens Vanthoor staged a strong comeback with good lap times no thanks to an accident that lost them 3 laps.

Then there was the No. 28 Audi Sport Team WRT driven by the German Christopher Mies, Swiss Nico Müller, Swedish Edward Sandström, and Belgian Laurens Vanthoor. Despite the tough battle between the BMWs and Porsches, their R8 LMS ran superbly while brilliant pit stops helped them build a significant lead. And after 156 laps, the team managed to cross the line 1st overall and in class with a 40.729 second advantage over the BMW Z3 GT3 in 2nd.

Adding to the excitement, this year’s Nürburgring 24 Hour race saw the most number of lead changes – 35 times to be exact, which is a record that stood for 45 years.