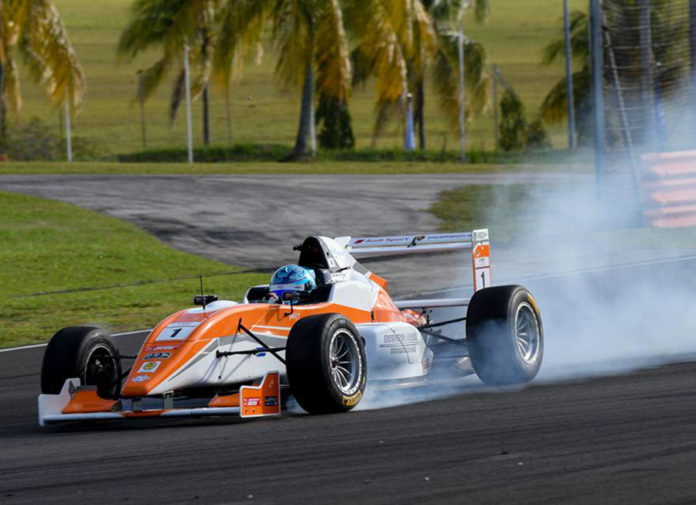 Kim Jeong Tae and Thomas Swift definitely had the pace to fight with the front runners at the Sepang International Circuit (SIC). Case in point, the South Korean driver qualified in P3 for both sessions while Swift would let him start from P8 and P11. Some costly mistakes and a bit of bad luck, however, prevented them from securing a win. But their fortune changed on the last day of the event, on the very last race.

Race 10 on Saturday saw Kim challenge for position on the very first lap and was leading the race by Turn 4. Then it happened. He spun out on at least 2 occasions and was lucky enough to salvage 5th place. Swift was running as high as 5th, but failed to finish after spinning out.

Things didn’t quite improve on Sunday’s 6-lap sprint. Kim’s 2nd place finish was taken away after it was discovered that he jumped the start. A 30 sec penalty dropped him down to 7th. A mistake from Swift on lap 2 sent the driver from Hong Kong off the track and earned him yet another DNF.

For the last race of the weekend, Kim played it safe and stayed in 4th for most of the race. But he was able to capitalize on another driver’s mistake and moved up to 3rd. He would hold this ’til the chequered flag dropped and earned Cebu Pacific Air by PRT a well-deserved podium finish. His teammate also had a good run, finally able to finish the race in 7th.

In just 2 week’s time, the Formula Masters China Series will be back at the Sepang International Circuit for the penultimate round in the 2016 calendar.

Kim Jeong Tae: “I had a great car all weekend thanks to Cebu Pacific Air by PRT. I was pushing hard for a podium finish in every race and I finally did it on Sunday afternoon. I could have done a bit better in the other races, but it was still a very enjoyable experience in Sepang.”

Thomas Swift: “We made good progress in Sepang and I was quick enough to challenge for Top 5 position. But my mistakes proved to be quite costly as I failed to finish in the first two races. I am very happy though that my efforts paid off in the last race of the weekend to get 7th place.”