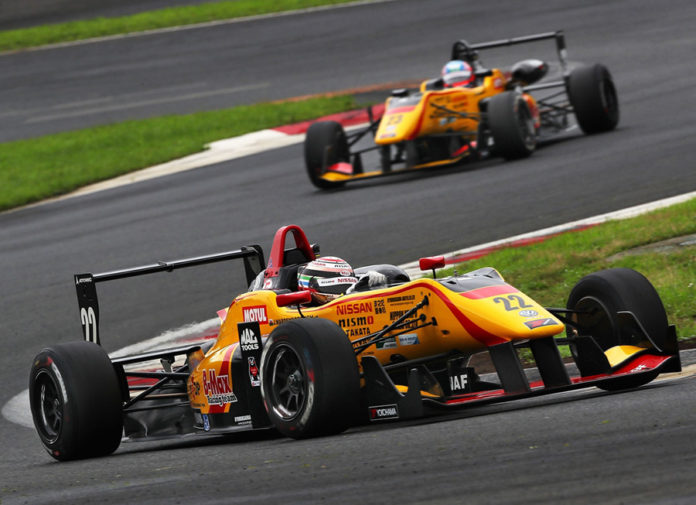 NISMO driver Jann Mardenborough made the big switch from virtual reality to become a professional racing driver when he won the Nissan GT Academy in 2011. These days, he’s racing in the All-Japan Formula 3 Championship under the B-MAX Racing Team and now leads the championship after dominating the race weekend at Fuji.

The 24-year-old British driver was dominant throughout FP1, FP2, and during both Qualifying sessions to secure pole. His fastest lap was a massive 1.902 secs faster than the 17-car field in damp conditions.

In Race 1 on Saturday, Mardenborough enjoyed a lights-to-flat victory around the 4.6 km Fuji Speedway to secure his second win of the season. His fellow Nissan Driver Development Program (NDDP) teammate Katsumasa Chiyo, on the other hand, ended up in 4th and was a mere 5.469 secs behind.

Mardenborough was once again leading the pack on Sunday’s race. But Chiyo managed to jump ahead during a late restart after a safety car period and take the win. The Britton chased the former Bathurst 12-Hour winner to end up in 2nd.

His double podium finish earns him the Drivers’ Championship lead with 7 more races to go this season.

Jann Mardenborough: “It was probably my strongest race weekend ever. Now I’m leading the championship which is great. It would have been cool to win today and I was leading until the last 3 laps when the safety car came out. Chiyo got a good slip-steam and got by me. I’m really pleased with the whole weekend. We’ve been very strong and pulling a gap to the TOMS car which is our main rivals who are now 2nd and 3rd in the championship.”

Katsumasa Chiyo: “I was on the inside of grid on the start and the track was still a little damp. I had wheelspin at the start and dropped back to 3rd but worked my way up to 2nd. My pace was pretty good and I tied to push every lap to try to catch up to Jann. The gap was quite big but finally a safety car came out and gave me a big chance. My restart timing was just perfect and I am very happy to get my first win of the season.”