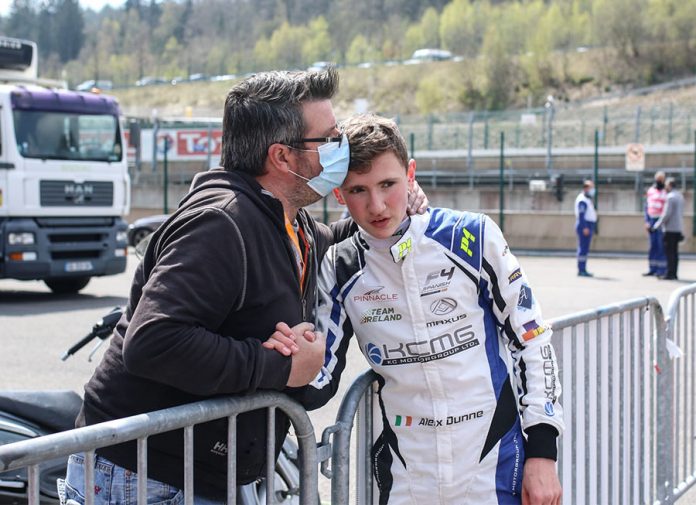 In stark contrast to their fairytale season opener debut, Pinnacle Motorsport endured a tough race weekend when the Spanish F4 Championship moved to the Circuito de Navarra for the second event of 2021. But it wasn’t any fault of the team or their young driver Alex Dunne as technical woes prevented them from fighting at the front.

Dunne was off the pace early on, qualifying in a lowly P14 on Saturday. But it was only later when they discovered a crack in the gearbox bell housing that affected the #11 car’s handling. Although the Motorsport Ireland-licensed team was able to quickly fix the issue, it affected their set up and speed all weekend.

A quick getaway off the grid in Race 1 saw the 15-year-old Irishman make up several places to make it as high as P9 on the very lap. However, he was later swarmed by his rivals over the course of the 16-lap race to end up 14th when the chequered flag dropped.

The second day of racing was a fresh start for Dunne and Pinnacle Motorsport, putting the previous day’s woes behind them. Dunne fell back to P20 in the early stages of Race 2 before the safety car was deployed. And by the time the race restarted, there was less than 6 minutes left on the clock. He had to make the most out of the remaining laps to make up lost places and went on to take 15th spot on the very last lap.

His best performance, however, came in the final race of the weekend. Dunne was quick to gain a position in the opening lap of Race 3 and finally break into the Top 10. He continued his charge and climbed up to P8 before the safety car period before taking another spot after the restart. Luckily, he managed to hold onto 7th as the race was red flagged on the very last lap, securing him a point-scoring finish in Navarra.

Alex Dunne slides back to 9th in the Driver’s Championship with 5 more events left in the 2021 calendar. The season resumes on the 16th/17th of July at the Algarve International Circuit in Portimão for Round 3.

Alex Dunne: “That was tough. We were bound to have difficulties at some time during the year but I was not expecting a weekend like this. I’m glad we found the issue when we did as we can now get on with fixing the set up of the car and we have already made good progress through the three races since the fault was diagnosed. We don’t race again until July but we have three tests arranged between now and the next round so I’m sure we will continue to make progress before we are back in action in Portugal on July 17th.”

John O’Hara, Team Director: “We had hoped to be closer to the front here at Navarra. It was still a good learning experience overall for both Pinnacle Motorsport and Alex. A cracked gearbox bell housing cost us pace on Saturday, though our fortunes later improved and we were finally fighting at the right end of the field by Sunday afternoon. Focusing on the positives, pleased that Alex was able to collect valuable points and he showed real maturity on track all weekend. He’s really growing as a driver and we’re looking to bounce back at Portimão in July.