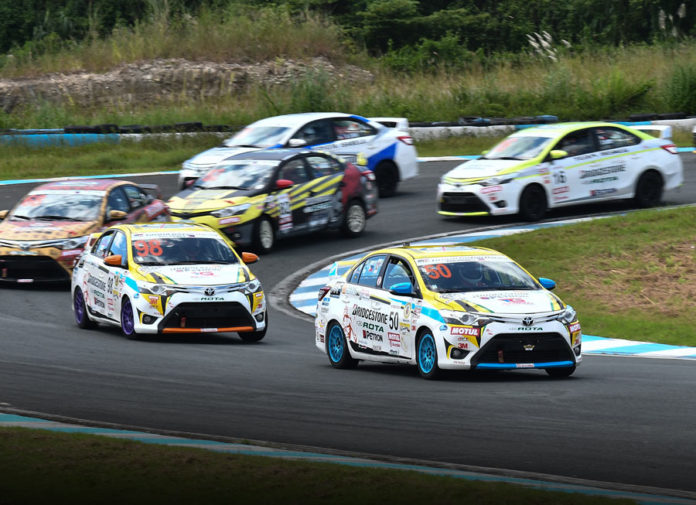 Although it’ll probably take Toyota Motor Philippines another month or so to publish the official results, we’re jumping the gun to report that Toyota Team Cebu (TTC) is now the overall Vios Cup team champion for 2018. Their driver Clive Fermin also scored a podium and race win at the Clark International Speedway (CIS) last September 21/22 to secure the Promotional Class title. 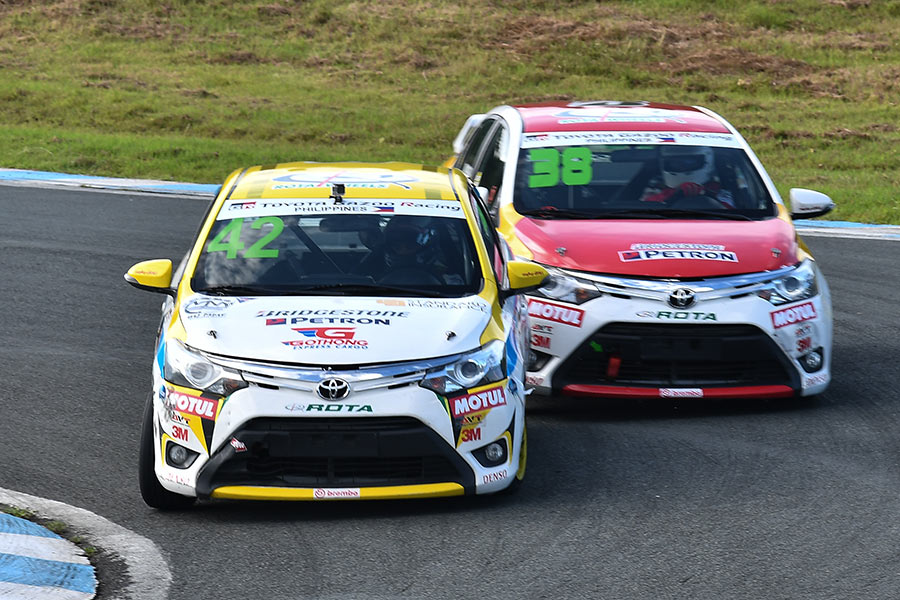 Super Sporting Class
Jette Calderon and Sean Velasco were aiming to score big on points during the season finale. But things didn’t go exactly as planned.

Jette did well in Qualifying to start from P5 on the grid. However, he got stuck in traffic and wasn’t able to capitalize on his pace. His weekend would yield a 7th, 8th, and nearly a 5th place finish if only he didn’t get bumped off track that dropped him down to 12th.

As for Sean, handling and engine issues prevented him from climbing higher up the standings than 12th. An overheating issue then prematurely ended his hunt for a top 10 in Race 3. Nevertheless, both drivers are happy to have contributed to the team’s success this season. 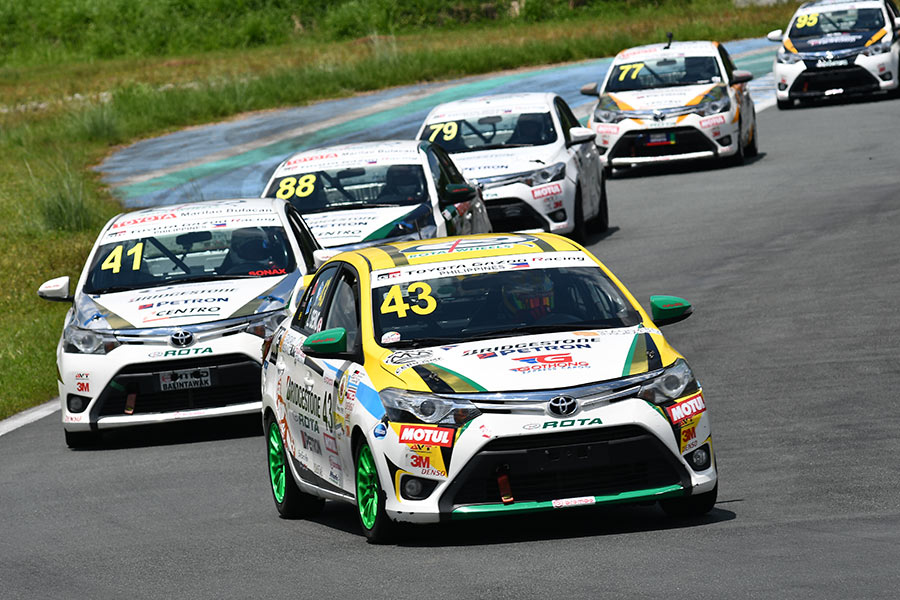 Bridgestone Sporting Class
Aside from the team championship, Lord Seno also had the Sporting Class title in his sights. TTC’s Team Captain bagged 4th in both opening races despite carrying a 60 kg success ballast. This meant that as long as finished 1st in the final, the title was his.

Lord made a brilliant start in Race 3 and took the lead on the opening lap. He pushed hard to stay ahead, but overheated his tires and slipped back to 5th. His heroic efforts still allowed him to land 2nd in the standings, missing out on the title by only 5.5 points.

“I lost to a better, quicker driver that day, but I’m grateful to be the runner up. Also, the main goal for Toyota Team Cebu was to get the team championship and we did it. This one is truly special,” he said.

Oscar Suarez in the #80 machine wasn’t as lucky. He was involved in a race incident on Friday and recovered to salvage 7th. Things only got crazier on Saturday where he was excluded by the stewards in Race 2 and concluded the season with a 10th place finish.

“I’m thankful for the experience and learned a lot. Thanks to my wife Christy for her understanding, my teammates for their support, team captain Lord for his guidance, the best ever team manager John, and our crew headed by Jun Cabrera,” remarked Oscar. 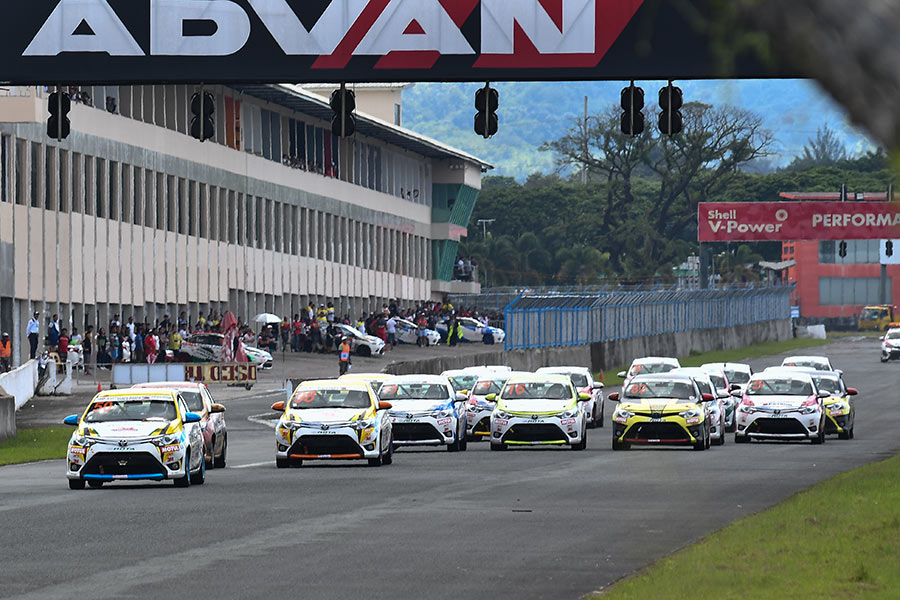 ROTA Promotional Class
TTC locked out the front row in Qualifying which saw Clive ‘Dr. Speed’ Fermin line up on pole with Bobby Pangilinan alongside. The duo enjoyed a lights-to-flag victory to claim a dominant 1-2 finish for TTC.

This gave Clive the points lead and only need to stay ahead of Vincent Courol and Elysse Menorca to take the title. While the rest of the pack scuffled for position in Race 2, he kept his nose clean and placed 4th with Bobby right behind in 5th.

It was Bobby’s turn to lead in Race 3. Sadly, his hopes of a win was dashed when the #98 car was hit from behind. The damage slowed Bobby down and ended up 16th. Clive, on the other hand, steered away from trouble and took the chequered flag in 2nd place along with the Promotional Class championship crown. 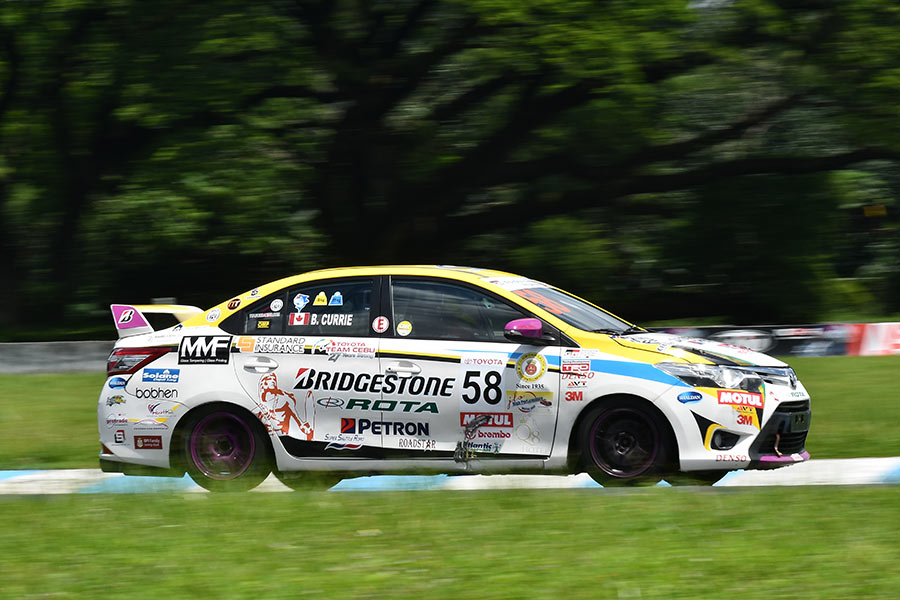 It was a different story for Brian ‘The Big Chief’ Currie. His shot at the championship faded away as he struggled for pace. Yet, he still managed to score points in the first 2 races with 9th and 8th.

“I’m very proud of the team winning the overall championship. No egos in TTC whatsoever with everyone just focused on getting faster and winning races. Overall, I’m very happy with the season and the teamwork this year has been outstanding,” Brian commented. 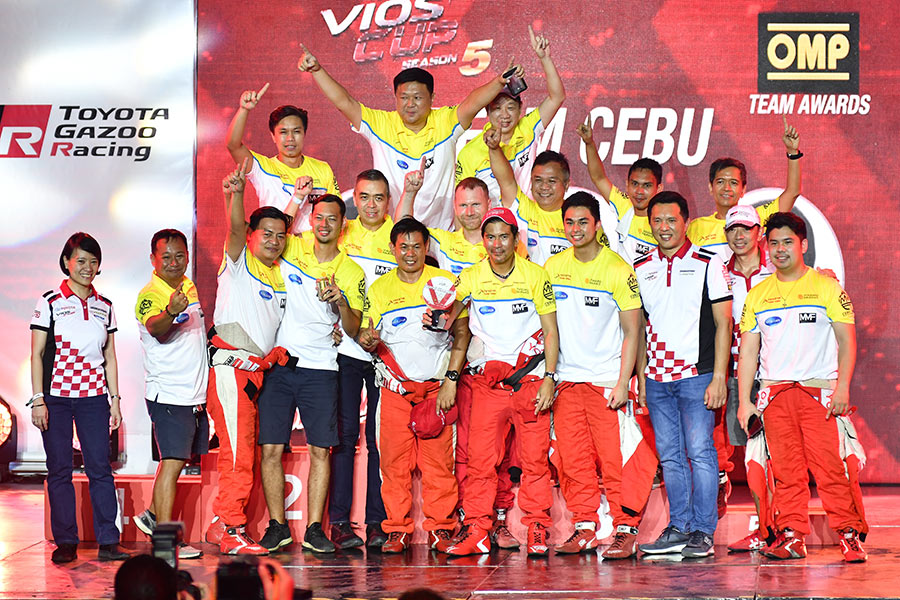 John Velasco, Toyota Team Cebu Team Manager: “Toyota Team Cebu came to the final round hungry for wins. We had a few gremlins over the weekend such as overheating issues and race incidents, but we managed to weed it out and pull through. Clive and Lord really helped TTC to victory. I’d like to thank and congratulate everyone in the team, specially Jose Manuel Y. Cuenco for the overall team championship.” 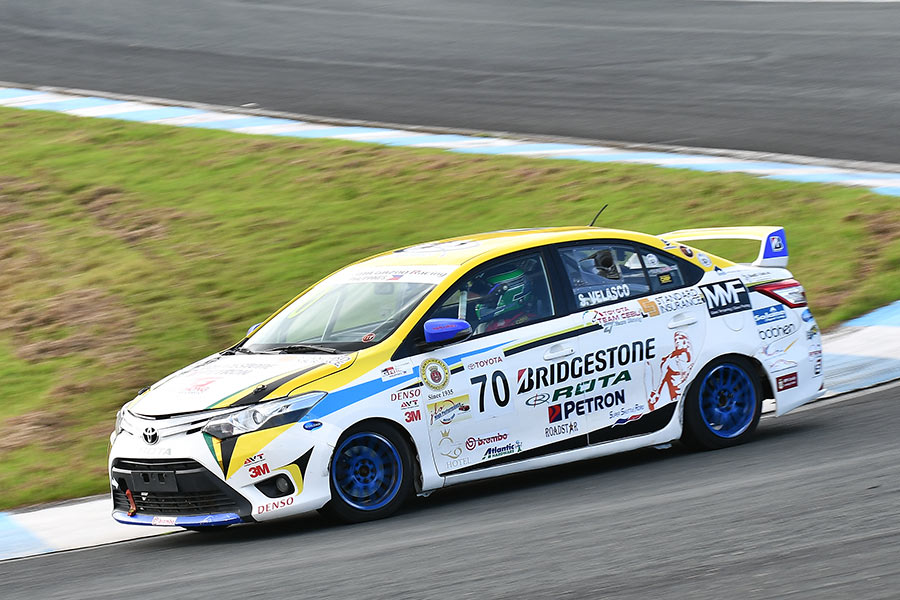 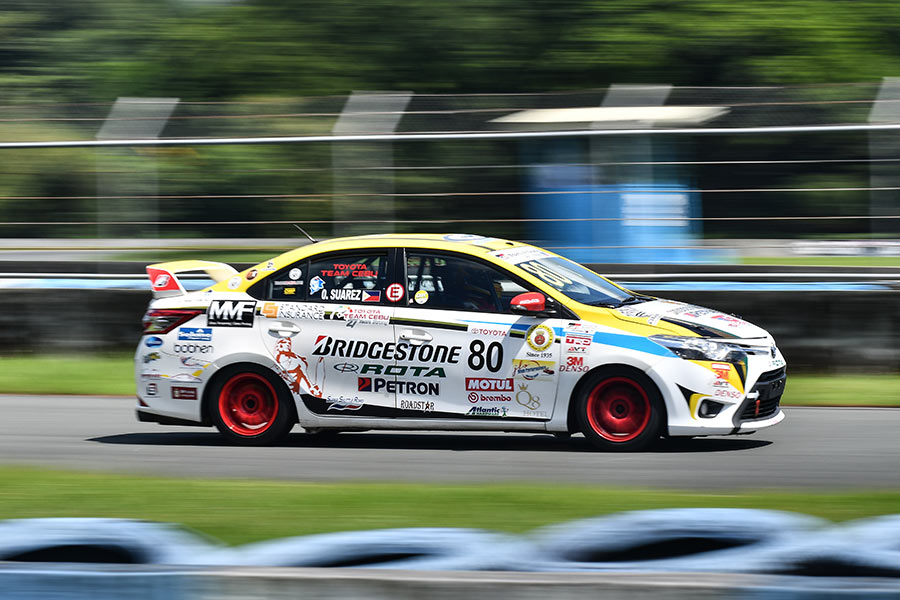 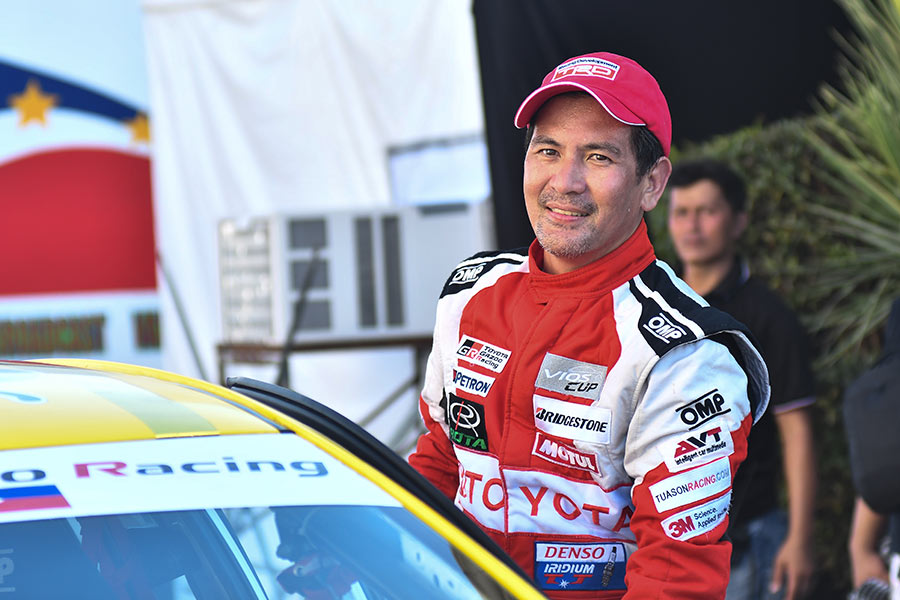 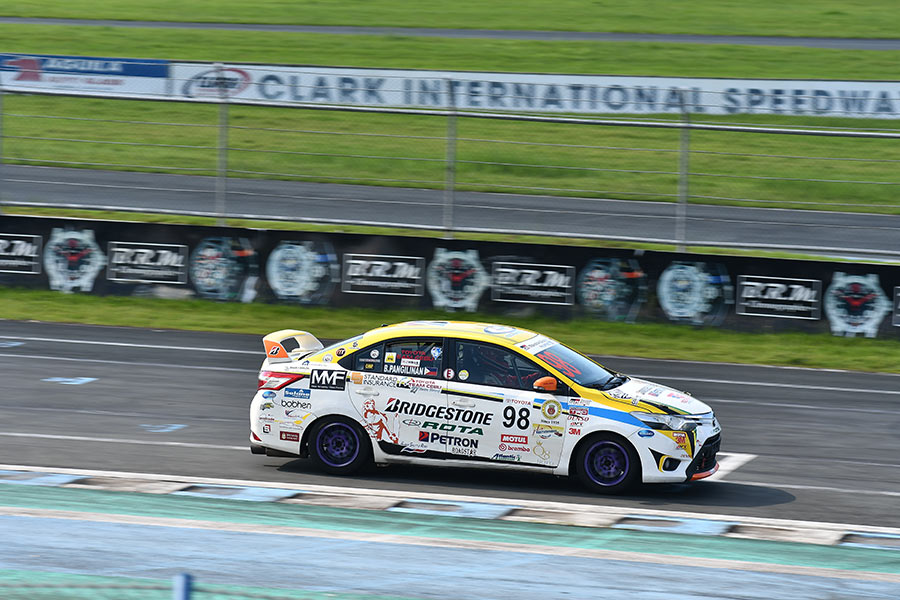