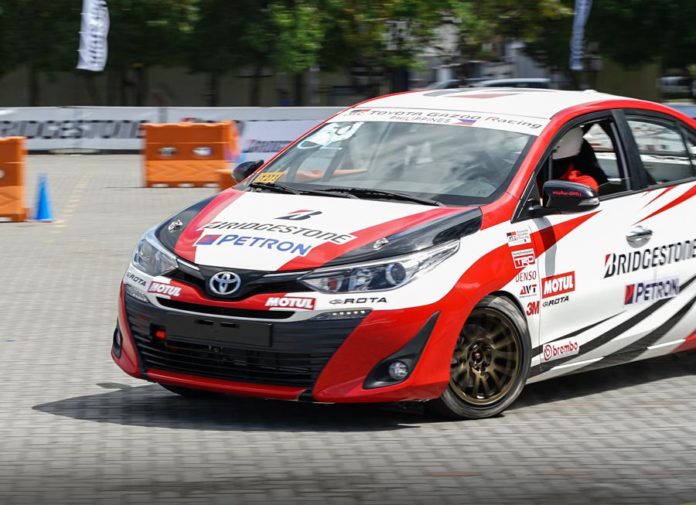 In case you haven’t noticed, the Super Sporting class has been missing from the Vios Racing Festival’s lineup ever since the Vios OMR Gen 2 cup car was introduced last year. But as we found out, the latest rulebook update confirms that the top-tier category is indeed making a comeback ahead of the 2020 season.

The Super Sporting class is reserved for the most experienced, most capable, and most hell-bent drivers on the Vios Racing Festival’s grid. Hence, it also produces the closest on track action at every race weekend. Competitors here must at least posses a National B license, be a Top 5 Finisher in the Sporting Class, and have finished a complete season in the Vios Racing Festival in order to qualify.

There are also some differences in the technical department. Whereas the Sporting, Promotional, and Celebrity Classes all run identically spec’d machinery, several modifications are permitted in Super Sporting. The new parts list from TRD includes a different Exhaust Manifold, optional Fiberglass Hood, Fiberglass Trunk, Front Rotor Discs, and Fan/Water Pump Belt. Headlights can also be swapped out for faux Fiberglass Covers not only to save on weight, but also probably to make crashes more ‘economical’. Meanwhile, teams are granted to remove non-essential parts such as the A/C unit, Fender Liners, Foglights/DRLs, and Passenger Door Siding Covers amongst other things on the list.

All these allow Super Sporting drivers to shave tenths, if not seconds off their lap times compared to the other categories. An insider even hinted that the latest 2020-spec Super Sporting cup car will be “substantially quicker” than the Gen 1 version used in past seasons, which will surely make for great racing this 2020.

What came as a shock though was the go ahead to use In-Car Communication. Exclusive for Super Sporting, this will be the first time for the one-make-race to have a driver-to-pit radio, done apparently to align our local series with other countries that are running a similar program.

As the class reclaims its throne at the top of the Vios Racing Championship’s pecking order, the prize money rightfully follows. 1st place in Super Sporting warrants a P50,000 prize per race, double than what the winning driver receives in Sporting. It’s the same when it comes to the overall standings where the Super Sporting Champion secures P500,000 as compared to P250,000 the Sporting Champion receives at the end of the season. This likewise affects Team Awards where entries must now have a competing driver in the Super Sporting, Sporting, and Promotional Classes in order to qualify.

Unfortunately, Super Sporting’s absence in 2019 effectively wiped out a quarter of a grid as drivers could only move up a class, not down. But all this changes when the new season begins in May.