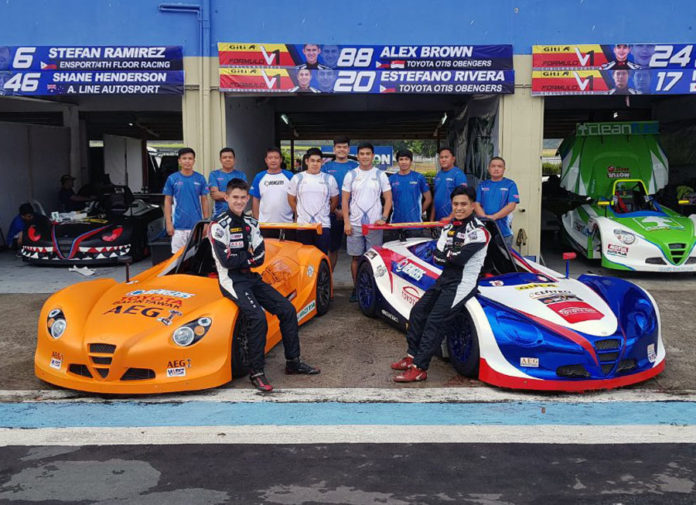 In 2019, there will be 2 new names on the Giti-Formula V1 Challenge grid as Obengers Racing doubles up on its single-seater program. That’s because the team which nearly won the championship last year has decided to add a second entry, so it can now take on both the Pro and Am classes, and hopefully score twice as many wins.

Headlining the team’s lineup are Estefano Rivera and Alex Brown who are both making their FV1 debut this season.

Estefano, who impressed with his Vios Cup performance in 2018, has been promoted to drive in the Pro Class and will run under the banner of ‘Toyota Otis-Obengers’. The talented driver has numerous race victories under his name and finished 2nd overall in the National Slalom Series back in 2017. He now takes over the seat vacated by Daniel Miranda who has since moved on to the TCR Asia Series.

“Goal is to get good results at every race and fight for the overall championship. Hopefully we’ll be in the running for the grand prize to race in Japan at the end of the year,” said Estefano. “Thank you Cosco Oben for the opportunity to again race for the team and everyone at Obengers Racing for trusting me with a drive in FV1.”

Meanwhile, 16-year-old Alex Brown will drive the team’s second car entered in the Am Class under ‘Toyota Balintawak-Obengers’. The Filipino-Singaporean is an accomplished karter who became the Singapore Karting Champion in ’13 and ’14. He then went on to take the X30 Malaysia and X30 Southeast Asian titles in ’16 and ’17 respectively. With his FV1 entry, Alex is finally graduating to single-seaters this year.

“Obengers Racing is one of the most competitive teams out there, so I knew that this will be the best place for me to learn and get a shot at good results. We feel that this year will be a positive one and it’ll be good to know if my skills in karting will translate into FV1” Alex commented. “Maraming salamat boss Cosco, Pao, coach Roland, and everyone in the team.

Both drivers will compete in the full 2019 Giti-Formula V1 Challenge calendar which will kick off May 18/19 at the Batangas Racing Circuit (BRC). 3 races are lined up this weekend with Race 1 on Saturday followed by Race 2 and 3 on Sunday.

Pao Agregado, Team Manager: “Considering that we only lost out on the championship by a single point, in spite of missing the first round, shows that the Obenger’s Formula V1 program last year was a success. With this the team decided to enter another car, which is a big step up for us. We’re fortunate to have Estefano Rivera and Alex Brown represent the team in the Pro and Am categories, both of whom are very talented drivers and embody the core values of the Oben Group which are Professionalism & Integrity, Communication, Respect & Recognition, Honesty, Teamwork and Unity, Loyalty, Driven, and Malasakit.”

Cosco Oben, Team Principal: “We’re very excited for this year’s Formula V1 Challenge as we have 2 top-level drivers, Estefano Rivera and Alex Brown. Estefano has been racing with us in the Vios Cup for many years and we promoted him to FV1 to further develop his talent. Also very happy to welcome Asian Karting champion Alex Brown to the team. He’s a young driver with lots of talent and we can’t wait to see how he performs on his single seater debut. With these 2 exceptional drivers, our seasoned manager Pao Agregado, and mainstay coach Roland Hermoso, I’m sure this will be an awesome year for Team Obengers in FV1.”