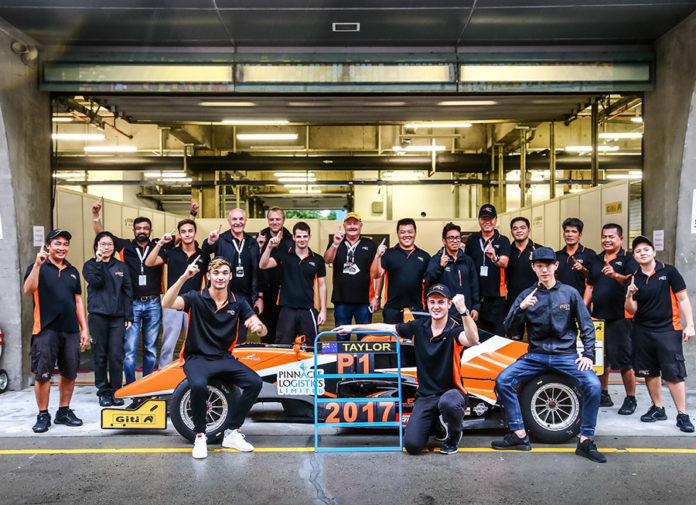 There’s a new drivers’ champion in the Formula Masters Series (FMS). His name is Taylor Cockerton from New Zealand who drives for Pinnacle Motorsport. He won this year’s title by 3 points, during the last race, in the last round of the 2017 season at the Shanghai International Circuit.

Taylor came into the weekend with a 16 point deficit. He qualified P3 and P5 during a dry Friday session, keeping his championship hopes within reach. His teammate Ben Grimes, on the other hand, did a stellar job with P7. Both regulars were joined by Billy Zheng (Zheng Jia Nian) who made his FMS debut by completing both sessions in P8.

But the weather quickly turned for the worse on Saturday. 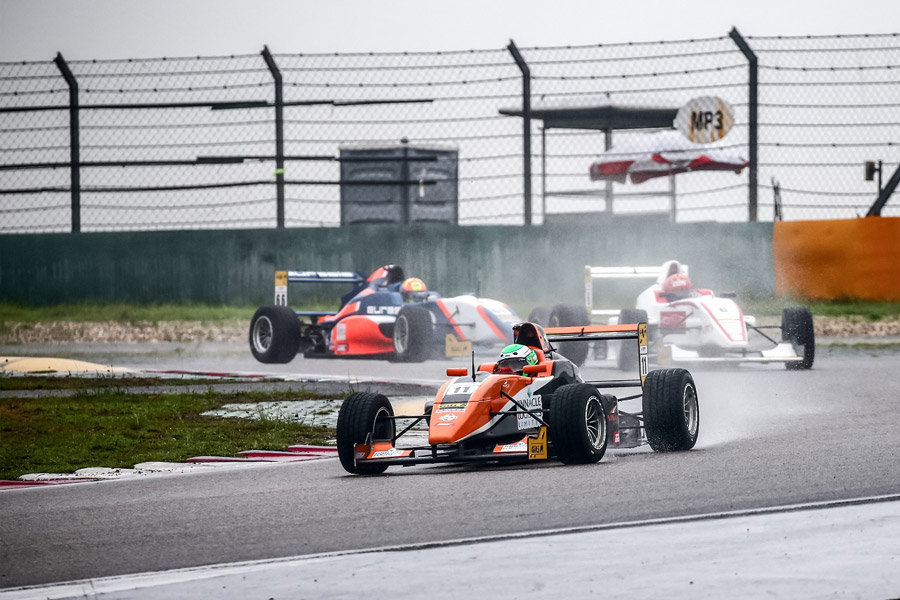 Race 1 started behind the safety car due to a strong downpour, shortening it to 8 laps. Despite the poor conditions, Taylor managed to move up to 2nd but later aquaplaned off the circuit to finish 4th. Ben gained several spots in the rain allowing the Filipino-British driver to cross the line in 5th. As for Billy, the rookie managed to drive a clean race to a 7th place finish.

By setting the fastest lap in the morning, Taylor took off from pole in Race 2. He easily converted this into a race win and kept the title within reach. Ben, however, wasn’t as lucky. Another driver spun into his path on the opening lap and the pair collided, thus causing a DNF. Billy continued to impress on his home race by claiming another solid 7th. 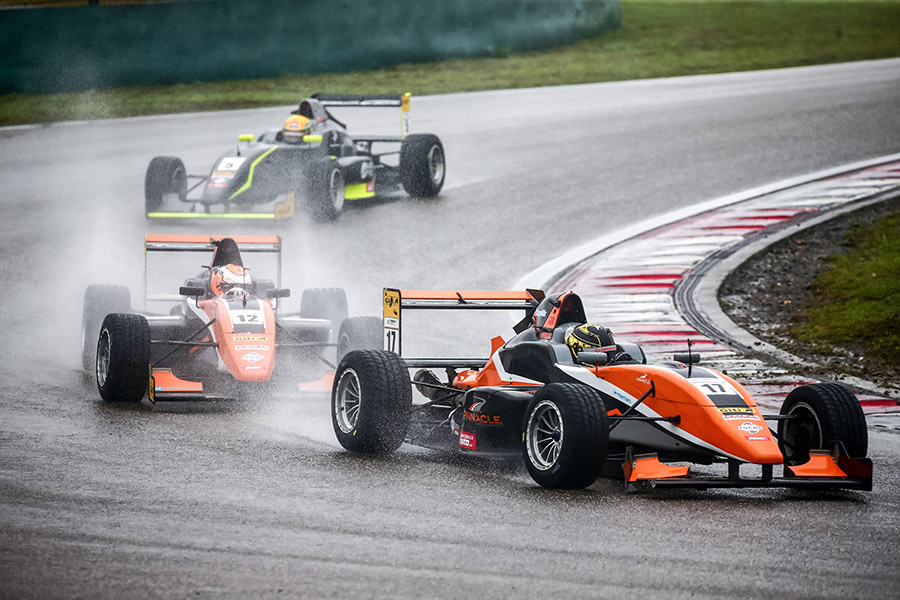 It continued to rain ’til Sunday, but the showers failed to slow Taylor down. He fought his way from P5 on the grid to another win by a 4.812 sec lead. Ben struggled in the poor weather and ended Race 3 in 10th. He was followed by Billy in 11th.

Only 9 points separated Taylor and the championship in Race 4. And as long he wins and his rival finishes 4th or lower, the title was his. A pole position start gave him the best of chances, which he happily turned into another 1st place finish. His main rival would finish 5th, handing Taylor the 2017 FMS Drivers’ Championship by 3 points.

Ben wrapped up his FMS season by finishing 11th, while Billy was excluded from the results for overtaking the safety car. Tsk tsk. 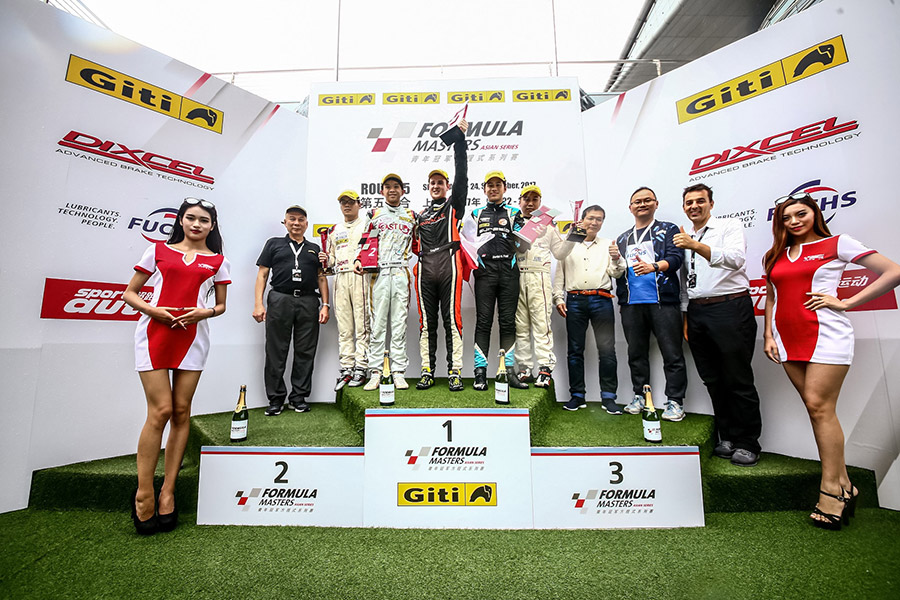 It was a great year overall for Pinnacle Motorsport. The Philippine-licensed team not only secured the drivers’ title for Taylor, but was also crowned as the 2017 Teams’ Vice Champion.

John O’Hara, Team Manager: “This was a great way to cap our season in FMS. Taylor is very deserving to be champion and has a bright future ahead of him. Ben made huge progress over what was a very strong maiden season in cars and will be fighting at the front in 2018. Billy also did very well in difficult conditions on his first weekend in an FMS car. I would like to thank and congratulate every member of Pinnacle Motorsport for the amount of work they put in to make 2017 a success.”

Taylor Cockerton: “What an incredible weekend. The car was incredibly quick on Saturday and Sunday and I owe this to Pinnacle Motorsport and Gary Thompson for all their hard work over the season. The penultimate race on Sunday was one of the best races I’ve driven in my life, going from 5th to 1st in soaking wet conditions and setting the fastest lap by almost a second. It was incredibly stressful, but the feeling when I crossed the line to win the championship is something I’ll never forget.”

Ben Grimes: “The weekend didn’t go as well as I had hoped. I struggled in the wet and couldn’t find the pace this weekend. As a whole though, the year has been positive and I’m looking forward to challenging for the championship in 2017. Congratulations to Taylor for winning the championship and to the team for doing a great job all year round.”

Billy Zheng (Zheng Jia Nian): “I enjoyed my first experience in Formula Masters. The nonstop rain made it a bit difficult, but I was able to get good results on Saturday. I learned a lot from Pinnacle Motorsport from the weekend and there’s more room of improvement. I’m looking forward for an opportunity to race again next year.” 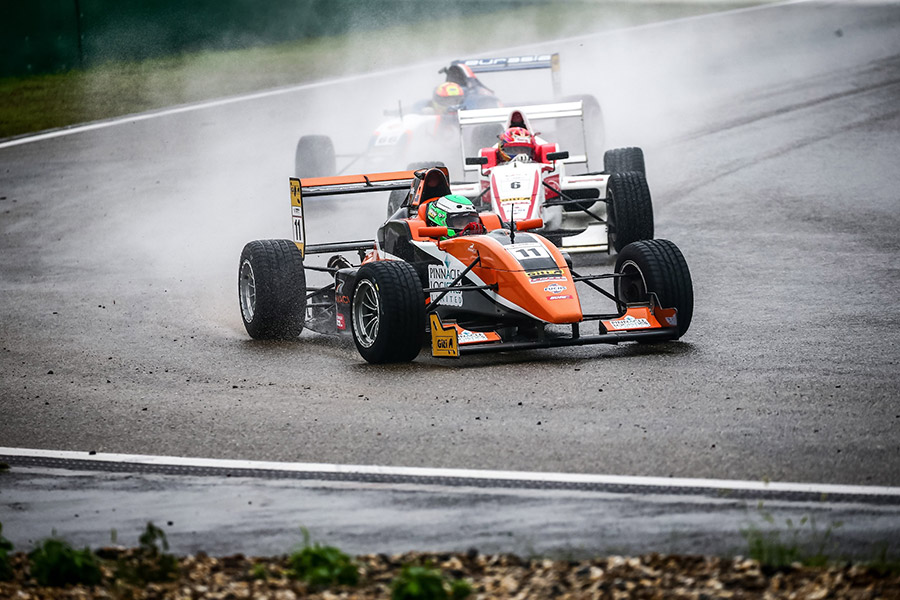 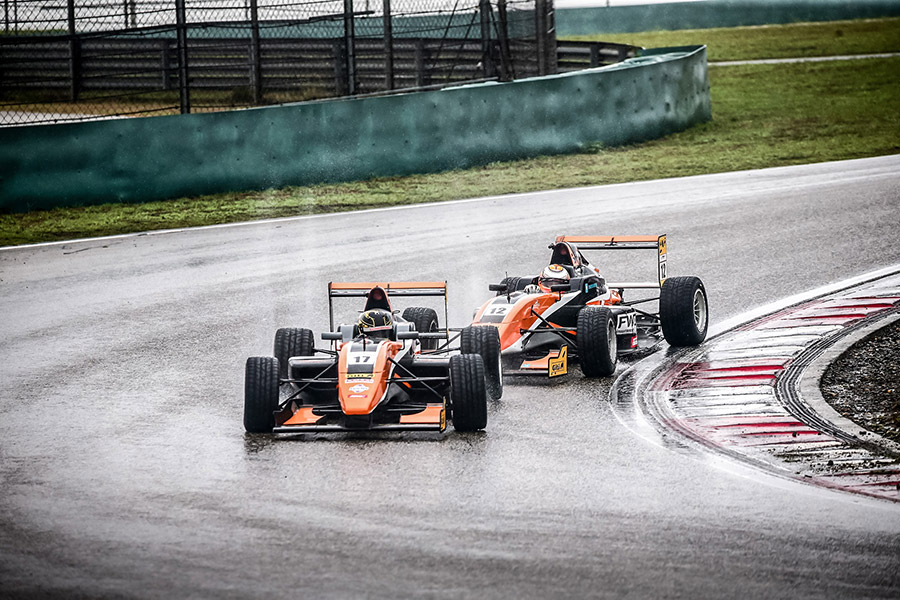 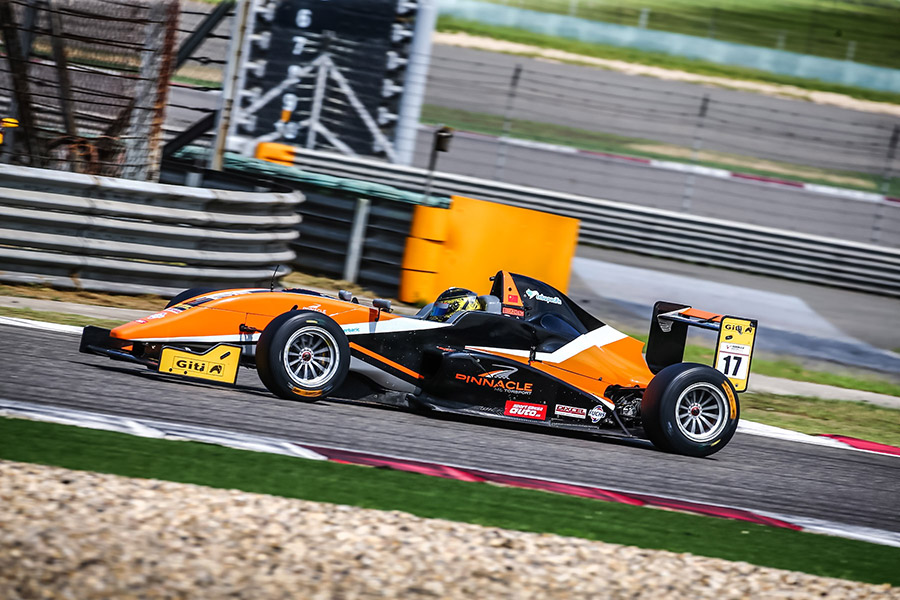 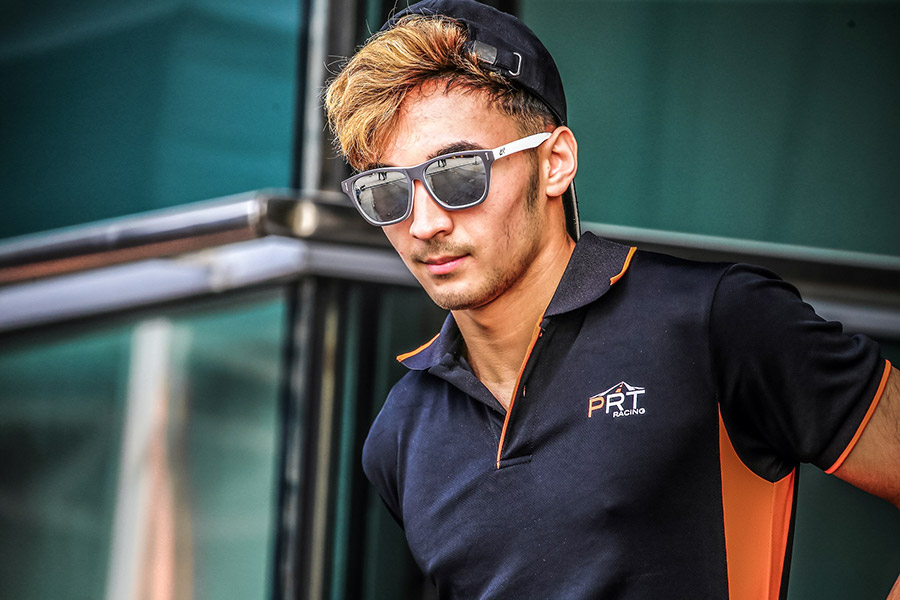 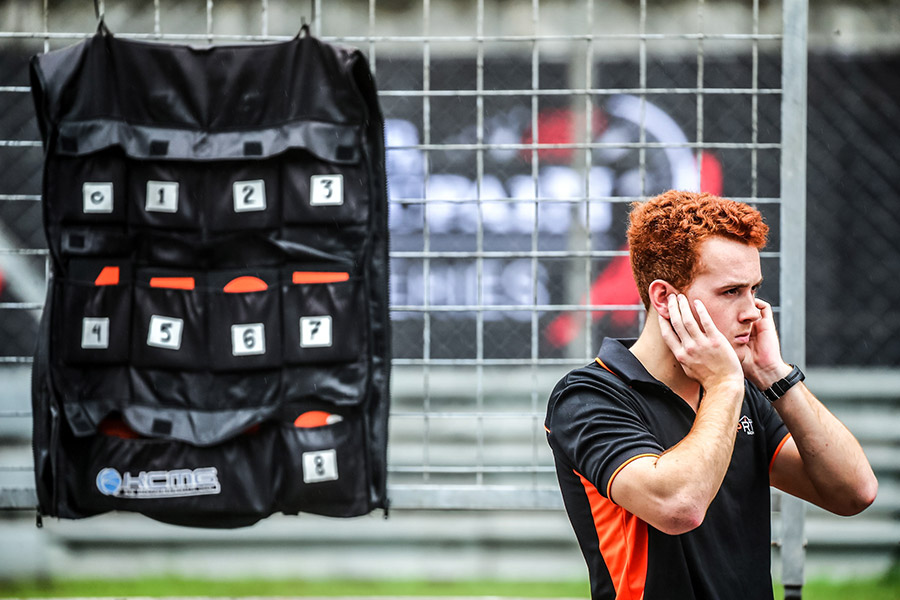 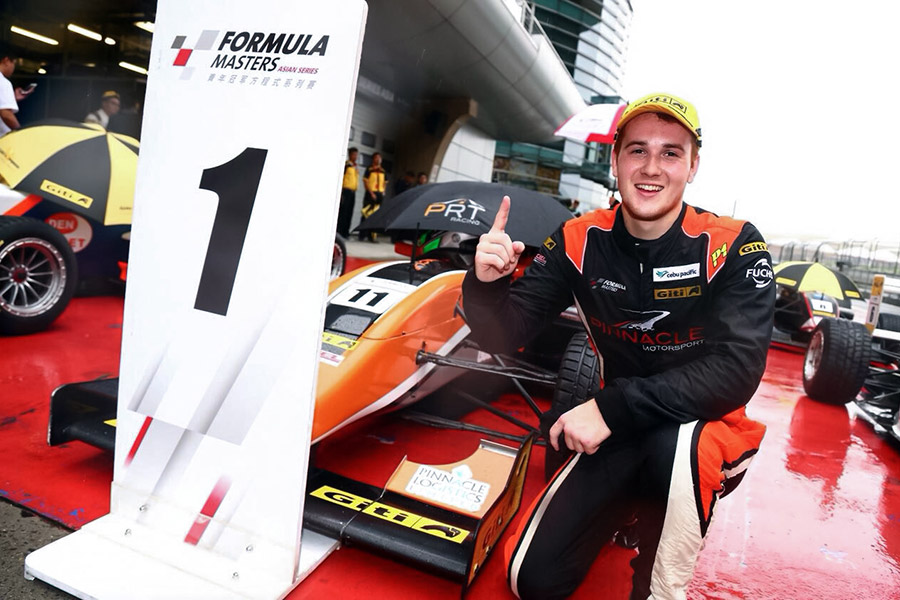