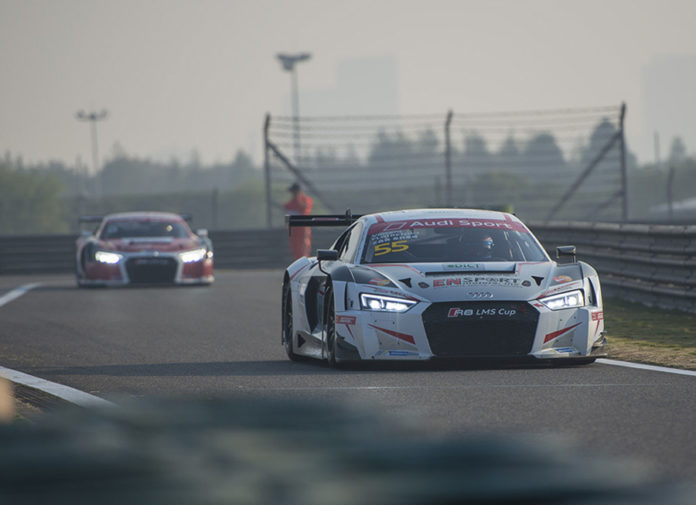 In the 2016 season of Audi R8 LMS Cup, there was one particular car we kept an eye on all year long. It was the #55 EN Sport by Absolute machine driven by none other than Vincent Floirendo who raced the Philippine flag.

“The Audi is a ‘real race car’ as compared to the other series I’ve joined,” he commented. “GT3-spec cars have more downforce and aerodynamics. You have to trust it specially through very fast sweeping corners at speeds of 220 km/h. With more G force, it’s also very tiring to drive.”

This proved to be a challenge during the season opener at the Shanghai International Circuit. While matching the pace of the other Amateur Class drivers wasn’t a problem, lasting the full race distance was. A very fatigued Vincent could only manage P14 and P16 overall (or P4 and P5 in class). But only 2 months later, we saw a very different driver in Buriram, Thailand where he scored his first podium in Am Class (P11 overall).

Not bad considering it was only his third outing in the Audi R8 LMS Cup.

“The top 10 drivers are Pro drivers and it’s very difficult to keep up with them. They have more seat time and race all over the world. But I only race in Asia Pacific and get an hour and a half of practice per round,” Vincent explains. “What’s good though is that ever Am driver is paired with a Pro driver who will give you pointers on how to improve. I also talk to my engineer to improve lap times through telemetry, comparing the fastest driver’s data with mine.”

His performance steadily improved over the season, claiming 2 more podium finishes at the Sepang International Circuit. And by the time Rounds 7 and 8 ended in Korea, Vincent has already climbed up to 3rd in the Amateur Cup classification.

Vincent admitted, “I didn’t like the race track in Taiwan. There was a section there that’s like a go kart track, very tight and twisty almost impossible to overtake.” But we don’t think it bothered him too much after he crossed the line in P3. In contrast, the final leg in Shanghai last November was his most memorable outing by far this season when he sealed 2nd place overall in the Amateur Cup championship.

What’s the next step for Vincent? This not the end of his Audi R8 LMS as he can run it again in the series for 2017. What piques his interest though is the much bigger Asian Le Mans Series or GT Asia Series.