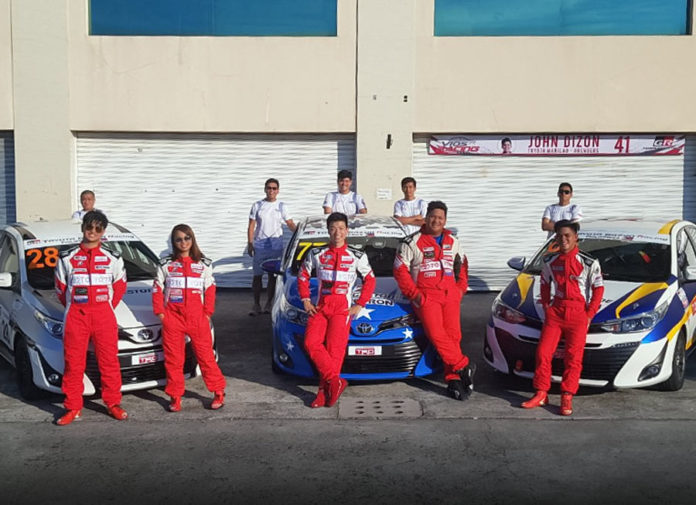 Of the last 5 Vios Cup champions, 2 would come from Obengers Racing with Luis Gono winning the title in ’14 and Daniel Miranda in ’17. This easily makes them one of the most successful teams on the grid. And while Toyota Motor Philippines’ (TMP) one-make-series gets rebranded as the Vios Circuit Championship, their drive to win remains the same for the upcoming 2019 season featuring a refreshed driver lineup.

The absence of the Super Sporting Class now leaves John Dizon and Marc Soong to spearhead the team’s attack in the Sporting Class, and more importantly in the overall Drivers’ Championship.

John Dizon secured the Sporting Class title last year in a dramatic season finale and won by a mere 5.5 points on his debut. Although the 2-time karting champion admits that there’s some pressure in defending his crown, he’s fully prepared to take up the challenge and is happy to be given the opportunity to drive again for Toyota Marilao – Obengers.

As for Marc Soong, he considers it a miracle just to be back racing for Toyota Balintawak – Obengers for a third season. He suffered life-changing injuries in a crash at last year’s season opener, but with his strong will power and intense physical therapy, was given the go signal to join the finale by October. This time he’s paying it forward by flying the colors of ‘Make-A-Wish-Foundation’ which is an international organization that grants children with great health challenges that ‘one true wish’ their heart desires.

The team’s sole lady driver proved that she can bring the fight to the boys last year and finished well on her debut season. It was a true feat of strength and determination that allowed Elysse Menorca to transition from being a sim racer and GT Academy finalist into Vios Cup race winner. For this, she’s been given another shot with Toyota North EDSA – Obengers to go after the title.

Interestingly, her new teammate happens to be her better half Quattro Adriano. Also a GT Academy finalist, this will be his first real race experience as he competes under Toyota San Jose Del Monte – Obengers. The couple should be able to help each other track, but unless are team orders, don’t expect them to give an inch when battling for race wins.

Series newcomer Julian Tang completes the lineup for Toyota Otis – Obengers. Once a competitive swimmer and cyclist, he has decided to follow his passion and enter motorsports. While he’s the least experienced driver in the group, Tang’s competitive nature should help him quickly hone his skill and deliver strong results.

Equipped with 5 brand new gen 2 Vios One Make Race (OMR) Cars, Obengers Racing is all set for the season opener this June 7/8 at the Clark International Speedway (CIS).

Cosco Oben, Obengers Team Owner: “I’m looking forward to a whole new series this year with the all-new Vios. We got brand new race cars and I’m excited to see how our drivers will perform in the Vios Circuit Championship. We’re DRIVEN to support grassroots racing and Toyota Motor Philippines and I hope we can sustain the success of Obengers Racing in local motorsports.”