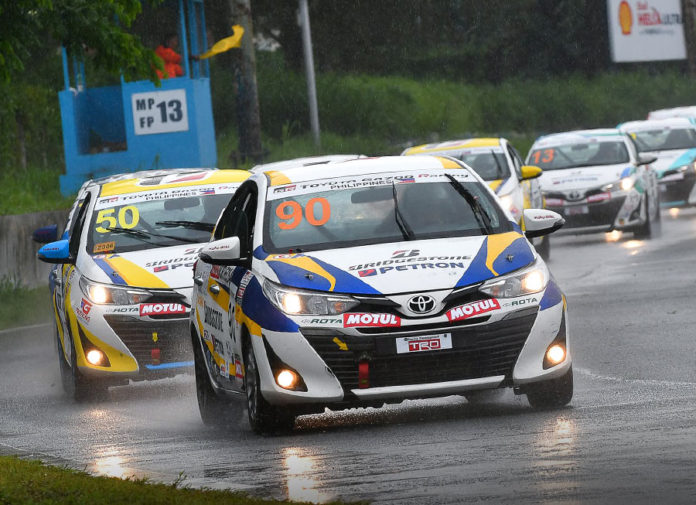 Obengers Racing continued its dominant run in 2019 with another stellar performance at the Vios Circuit Championship’s second event last August 30/31. And although there were some missed opportunities with their spectacular spills on track, the team was able to deliver 5 podium finishes and 3 race wins at the Clark International Speedway (CIS).

Remarkably, of their 5 entries, lady driver Elysse Menorca contributed the most with 2 victories to her name. 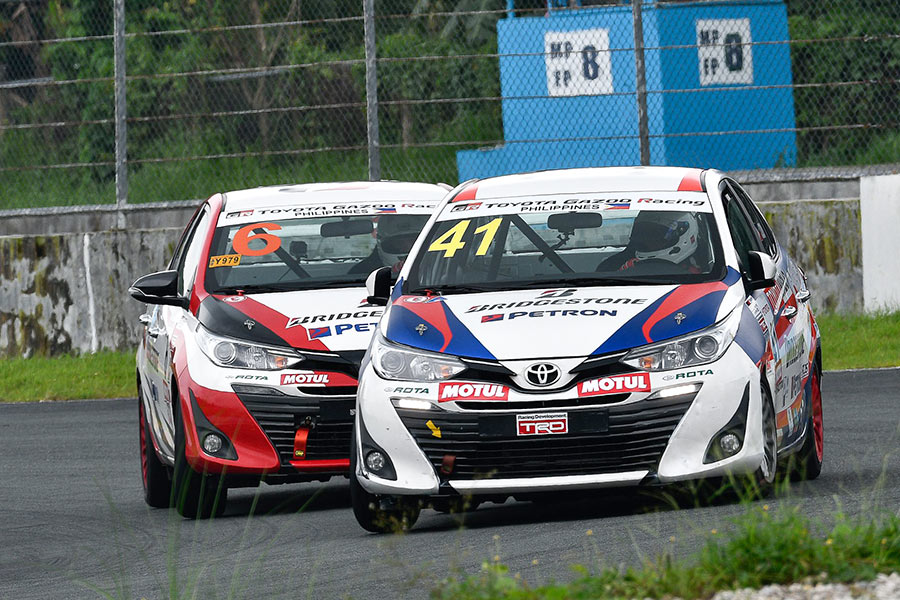 Sporting Class
John Dizon and Marc Soong again headed the team’s assault in the top-caliber Sporting Class. Starting from P3 on the grid, Dizon earned Toyota Marilao-Obengers’ first podium on Friday with a hard-fought 2nd place. He had to defend against Eggy Ong of Toyota San Fernando who hounded him all the way to the finish line.

His attempt at better result on Saturday, however, went belly up. He was tagged by another driver while fighting for the lead and lost several spots due to suspension damage. But the drama didn’t end there. With the chequered flag in sight, Dizon was hit from behind that sent his #41 machine into a violent roll yet miraculously crossed the finish line in 7th on its roof.

Sadly, his Vios One Make Race (OMR) car couldn’t be repaired in time for Race 6 and had to be sidelined for the rest of the weekend. 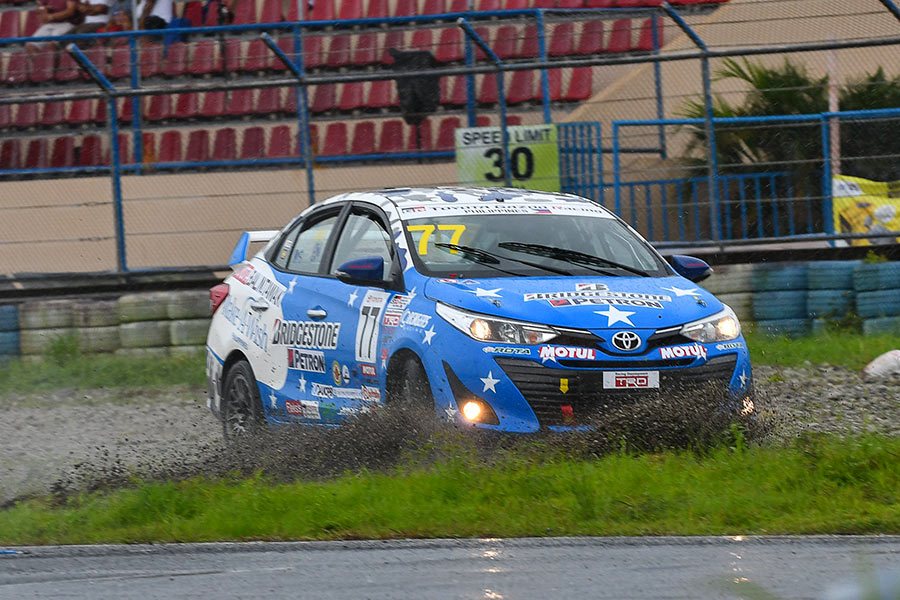 Soong, on the other hand, enjoyed his own on-track battles and finished 4th in Race 4. He then lead for most of Race 5 and looked to be on course to a win. But his first race victory of 2019 would have to wait a bit longer as he was pipped for 1st place with 5 laps to go, dropping him to 2nd.

Another attempt on Saturday afternoon also proved to be unsuccessful. Time time, Soong’s race ended when he aquaplaned across a rain-soaked circuit and beached his #77 ‘Make-A-Wish-Foundation’ Vios OMR by Toyota Balintawak-Obengers in the gravel. 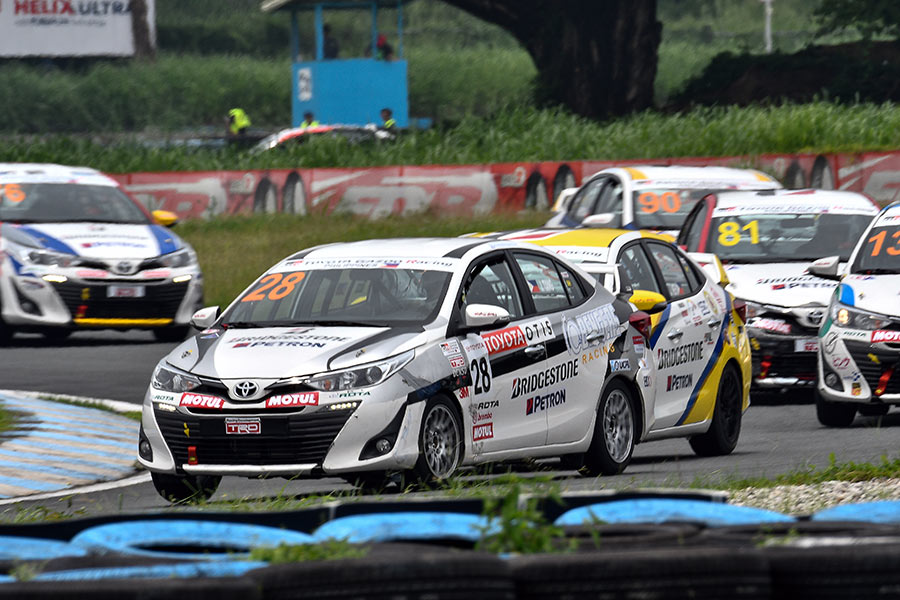 Promotional Class
Quattro Adriano, Elysse Menorca, and Julian Tang were again nose-to-tail all weekend as they re-stamped their dominance in the Promotional Class. Tang claimed Obengers Racing’s first class win on Friday afternoon despite a broken 2nd and 4th gears to finish in 1st. Likewise, Menorca suffered from transmission issues and could only manage 6th, while Adriano overcame his own problems as he climbed all the way to 7th starting from dead last.

The following day though was the complete opposite for Menorca. A flawless drive in Race 5 saw her pass 5 cars over the course of 12 laps and ran away with the Promotional Class victory. Adriano also improved to land an impressive 3rd place, but at the expense of his teammate. He unwittingly collided with Tang during a mid-pack scuffle that sent the silver #28 Toyota Otis-Obengers Vios OMR off course and into retirement. 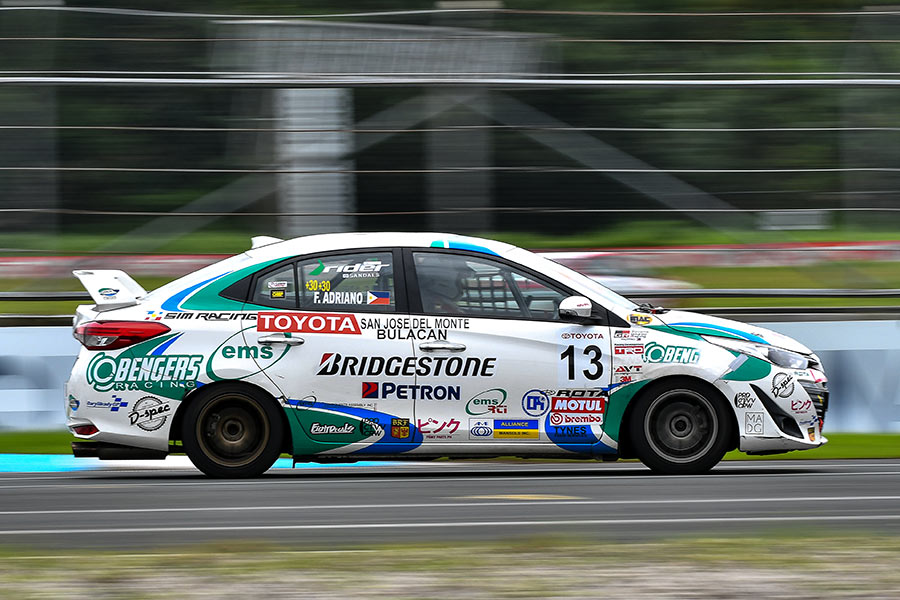 Eventually, things came together for the trio in the final race of the weekend. Braving the treacherous conditions and near-zero visibility, Menorca proudly scored back-to-back wins for Toyota North EDSA-Obengers in the downpour. More importantly, she was joined by Adriano and Tang who were 2nd and 3rd across the finish line for an all-Obengers lockout on the podium.

The Vios Circuit Championship won’t be back until November 8/9 for the the season finale at the Clark International Speedway (CIS). 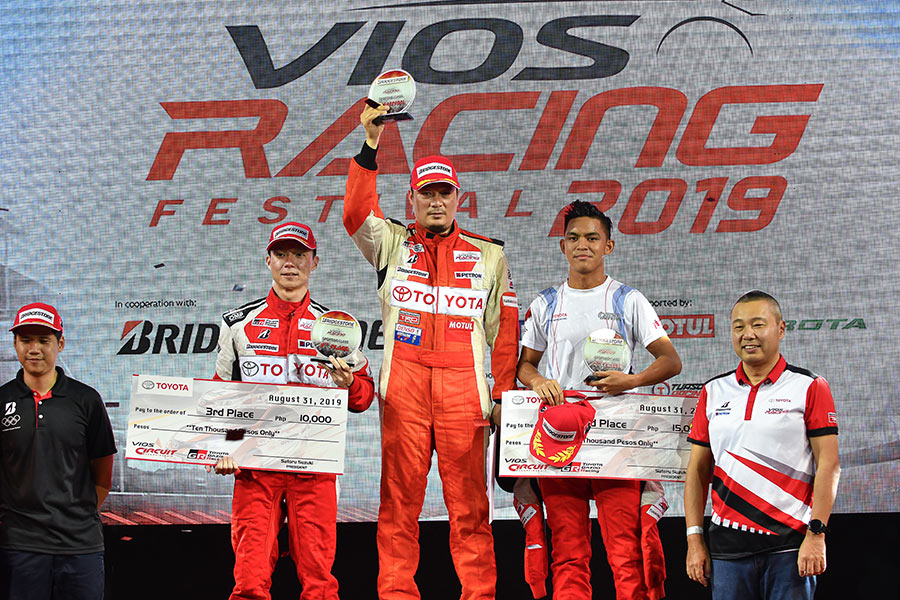 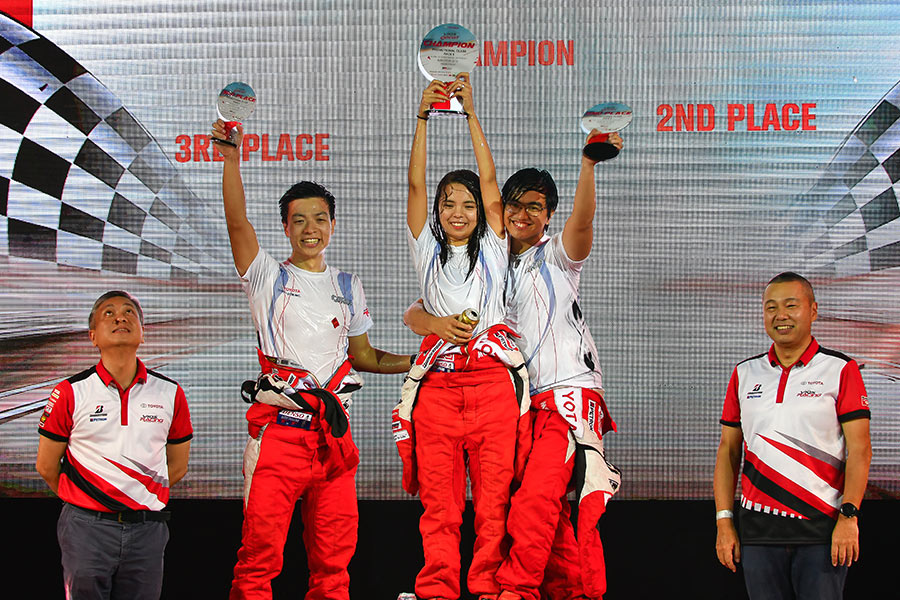 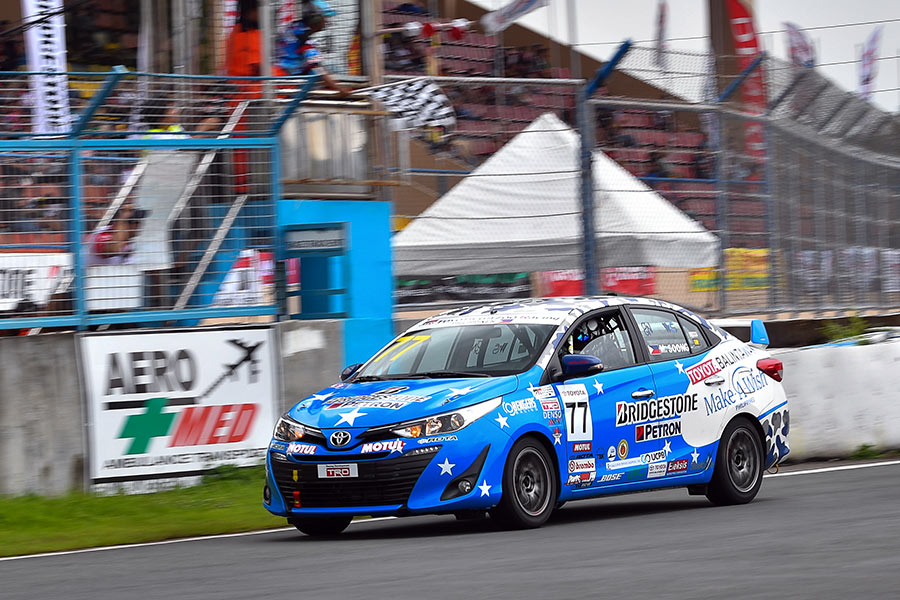 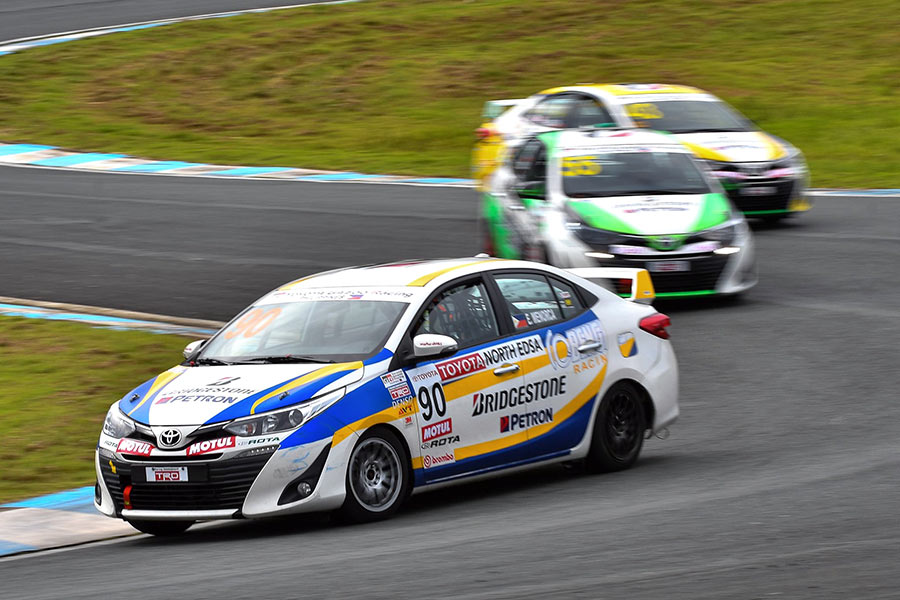 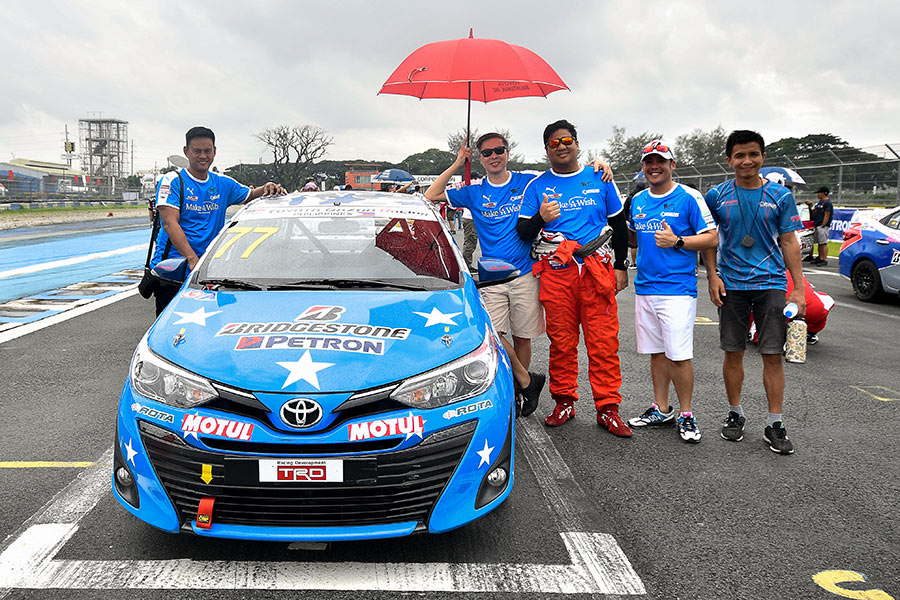